This rare NES game follows the tale of one sunglasses-wearing California Raisin on a quest to retrieve his fellow Raisin brothers by collecting four song notes and fighting through five levels filled with bushels of anthropomorphic fruit enemies, but was tragically never released by Capcom. Probably because they took one look at it and realized that not even moonwalking raisins could save this game from being completely terrible. YEAHHHHHHHH! 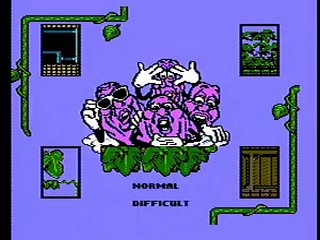 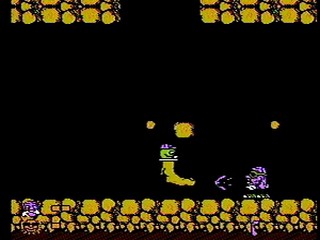 Grapevine
Nothing special here. The boss can be killed slightly faster however it's very glitchy/inconsistent for me.

Factory
I make use of the "super jump" glitch after climbing the first rope. This allows me to take the lower path, reducing the time I spend climbing. The super jump allows me to get back to the top path and get on the elevator. To perform a super jump, simply mash the jump button. This allows you to jump slightly higher. The boss fight goes well (the death is expected/intentional). If you can manage to make it to the boss with 3 units of health and get good boss RNG you can kill him without dying; very difficult to pull off though.

Maize Maze
First room was a little rough, costing me 1-2 seconds. Rest of of the level went fine, and I got the quick kill on the boss (basically killing him before he's able to jump again).

Juicery
Rough RNG with a couple of the enemies here, which cost me 1-2 seconds. I was happy to get through the level and get the quick kill on the boss.

Final level
No mistakes here, went really well and my aim/mashing on the final boss was really nice.