Call of Cthulhu: Dark Corners of the Earth is a surprisingly well crafted adaptation of the Lovecraftian mythos released in 2005. Mixing adventure, stealth and first-person shooter elements the game visually stands out for having no HUD whatsoever. 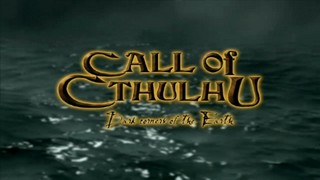 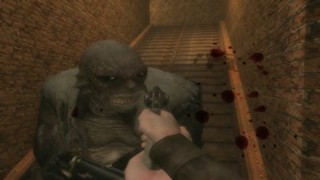 Lean right glitch - Leaning right is root of all evil. Or skips in this case. You can hide from enemies by leaning into a wall, skip triggers, grab objects and ladders through walls by leaning right, and most importantly open many bolt locks by leaning right through the doors.
Not a hard glitch to do either, just hold E and you're good to go.

Cabinet glitch/skip - Sometimes the first cabinet at the beginning of chapter 2 is already pushed out of the way, saving ~5 seconds. I have absolutely no clue what causes this.

Elevator shaft glitch - Sometimes you can just walk to the elevator cable like you had floor all the way, and once you hit the cable you just warp to the bottom without taking any damage. The issue is, out of 10+ hours of testing, I've gotten it 4 or 5 times and haven't found any kind of reliable setup for this.

C0 - Prologue
Save point and the half dead man's cutscenes are visual triggers. They are skipped by not looking at them at certain places.

C1 - A Visit to the Old Town
The policeman is passed and rum is picked through the wall using the lean right glitch. Instead of waiting ~10 seconds for the policeman to start new patrol round, we talk to him while leaning inside the wall to avoid getting caught. Talking to him forces our character to a certain location, and so we get past the policeman.
Rest of the chapter is pretty much just walking, talking, watching cutscenes and waiting at loading screens.

C2 - Attack of the Fishmen
A cutscene is skipped in the vent by walking by the trigger while leaning.
This chapter is really RNG heavy. Getting shot in a way that slows your movement speed pretty much means the run is over (or atleast you're 15+ seconds behind). I had close to perfect RNG, only getting shot few times, and none of them did enough damage to slower my movement speed/force me to heal in a bad place.
One visual trigger is skipped in the sewers and part of the level is skipped by doing somewhat tight jump from the ladder at the end of the level.

C3 - Jailbreak
Cutscene played at beginning of this level. Out of few hundred runs, this hasn't happened even once before. I have absolutely no clue what caused this to happen.
Opening the hatch and going through the sewer is skipped by opening bolt lock from the outside by using the lean right glich.

C4 - Escape from Innsmouth
First part of this chapter is rail shooter, no way to speed it up.
A bit of bad shooting on the second part, but thankfully enemies didn't manage to hit me, so no time lost.

C5 - Marsh Refinery
Going the "intended way" until loading screen to load parts of this level. After the load, we skip straight to the pressure valve.
A bit of bad shooting yet again. No extra damage taken (the guys that hit me always hit). Few seconds lost because of this.
Instead of fighting the slime monster, we go and trigger the chase/running away part and continue forward.
Getting the wrench first, opening valve #2 first instead of opening it last is the fastest way to do this part.

C8 - Devil's Reef
Nothing much to say here. Haven't found way to skip anything in this level.

C9 - Air Filled Tunnels
Getting weapons and food bucket, then just walking from place to place picking up items that are needed. Pretty happy with my shooting on this chapter. Got hit at the very end, which lost a few seconds.

Overall I'm really happy with the run. Few small errors, but with all the crashing issues and RNG, I don't see a better single-segmented run coming anytime soon, unless new skips/glitches are found.