Released in January 1988, The Adventures of Captain Comic is a classic MS-DOS platform game and one of the first side-scrolling titles for the PC, later ported to the NES. The player takes control of the eponymous Captain and must guide him on a mission to the planet Tambi to recover three treasures stolen from the planet Omsoc. 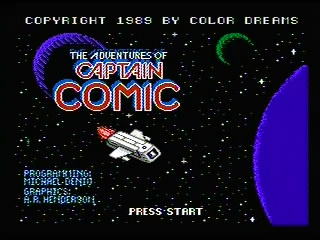 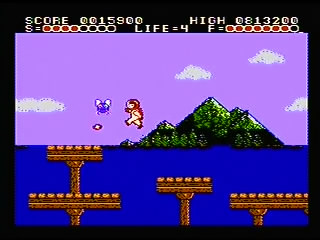 Let me start by saying how utterly awful this game is and how much of my will was completely crushed everytime I popped this game into my poor NES and hit the power button. This game is what nighmares are made of. It's a train-wreck. It's an abomination. It should not exist, and yet it does...ok, it's not HORRIBLE, but holy damn, it's really close, especially for speed running, because it means you have to play the game OVER AND OVER! OH GOD I'M GETTING FLASHBACKS OF MY CONSTANT ATTEMPTS! GET AWAYYYYYYY!!!

ugh...man. ok, I'm better. Anyway, I'm going to try to explain this run as thoroughly as possible, but I'm going to be honest here, who cares? No one else will pay attention to detail to this game as much as I did, and I haven't a clue why I even did. Maybe because I'm insane? But, if for whatever reason you are interested how everything went as smoothly as it did in this run, feel free to read on, because it isn't as simple as just running. There's a lot of luck and knowledge of the enemy patterns involved. Also, the wall climb at the end, I'll explain.

oh boy, the start of the game! You might notice immediately that I shoot enemies before they appear on screen, that's because I have been playing this so much, I have learned they have a set pattern. What's even more amazing is it's different when you first turn on the game than if you reset it. When you first turn on the game, the first batch of enemies will appear around the hills where you have to jump up. Since I've been resetting constantly, you see the reset pattern. Another thing to note is some enemies will spawn differently and I think it's just random. For example, there's one spot where a worm will fall from into a gap and I can avoid it. Sometimes it'll spawn right past that gap and run into me. I dunno wtf causes it and it's so annoying.

Anyway, this area went really well. I usually have trouble when I have to start jumping around the trees because the enemy patterns are screwed up at this point. Also, the enemies will start to move faster. Again, I dunno what causes it and can't be bothered to research it because honestly if I did, then I would have to get some help!

This area also went really well. I missed the invincibility powerup a couple times because they dropped over pits. btw, the invincibility is the red shield with the lightning bolt on it. It also gives you a zigzag shot which doesn't run out of ammo. You might also notice I skipped the health here and in Rocky Forest. That's because I have to backtrack to both areas and the trip back is more vital for health than on the way. I also skip the gunshot upgrade because I'll pick it up on the way back and lose no momentum.

This area is pretty simple and easy. You just need to memorize the jumps and that's really about it. The invincibility is a plus, but isn't necessary since you get a health pickup anyway.

ok, this place didn't have a name on the back of the box. It might say in the manual, but I don't own that. This is where A LOT of luck is required to make it through without dying. It's almost vital to get the invincibility at some point in this area (and I say almost because I made it through without it on very rare occasions). You'll notice that I jump a lot in the narrow areas. That's because when you up in the air when the enemies spawn, it'll cause them to spawn on the floor above you, which you need to get the timing down to survive. You'll also notice I hesitate when I get the invincibility. This is because I was being very careful since I had no health left and I was playing with the game muted for obvious reasons (the sound and music is deafening), so when I started shooting, I knew I was invincible.

I love this area just because of the ridiculous name. Anyway, I hesitate here again in the beginning because I had no health and was nervous, but managed to get the health. Once I get the teleporter, you will see how ridiculous it is. It'll teleport you in the most insane spots sometimes.

The end of the game right here. This is where the major skip happens that saves me about 3 minutes. The moment I walk in, I teleport into the wall and simply jump up. It's harder than it looks, because you have to teleport at the right spot and it's pretty picky about it since you're not supposed to do that anyway. On top of that, it's much harder to teleport to the right than to the left. The only way to get it to work going right is to run into it. Going left, you can just stand in place so you can get your footing down. The fact that I got it first try was a miracle.

And that's it. There's two areas that this skip cuts out. An area that the box calls "KILLER BEE SHED" and another area that doesn't have a name. The only reason that you would go to these areas is to collect a lantern that is used in the castle. What you aren't seeing in the castle are these ghosts that come out and kick your ass. They spawn in high numbers, are insanely fast, and you can't kill them, so all you can do is just take it. The lantern fixes that, by shining light in the castle and making the ghosts vulnerable. The castle is also more than just one room. There's a few rooms you have to go through to make it to the top room. On top of that, when you get into the room properly, two ghosts take the crown away into a room next to it, which is hidden by a wall that you have to walk through! It's really annoying if you're trying it your first try because there's a pit inside the wall, but you can't see it because the platforms are invisible!!!

There are also some other stupid glitches. One of them being if you have no health left, get hit by an enemy and grab health at the same time, the game decided you were dead, even if you grab the health, you will still die! The same applies to invincibility. The only way to trick the game into thinking you aren't supposed to be dead is if you walk into a door immediately after getting hit. For some reason, the game will just forget about it. You can do this anytime you want. One of the most odd glitches I saw is if you stand in upper-left corner in a room (like the beginning of the moon area) and push up, the game glitches and your character is trapped in black space with your character's sprite being random items from the game. According to an interview with Michael Denio, who created the game, this is the reason:

"MD: This was a bug. I had "doors" in my code to take you to different worlds. When a door was unused, I put it at coordinates 0,0. You'll note you can't actually get to the far upper left corner of any world (except the space world). So, you actually went through a door, but where it put you was random garbage."

So there you have it. I guess he forgot to block off that area. What he doesn't realize that you can do it in other areas, like the cave. If you stand in front of the door where you get the health, you can make it above the ceiling. It's not very hard to do either.

Thanks to Mike Uyama for verifying since I know he's the only other person who has beaten this game and is stuck verifying it. If anyone else verifies this, then I am thankful and sorry at the same time.

Thanks to Nate for encoding, and again, sorry that you have to encode something like this.