Released in June 1990 by Seta Corporation, Castle of Dragon is a game where you're a guy with a sword that's trying to rescue a princess from a dragon. Pretty standard plotline, but this game has a certain something that sets it apart from the rest of its ilk. It's really, really, bad. 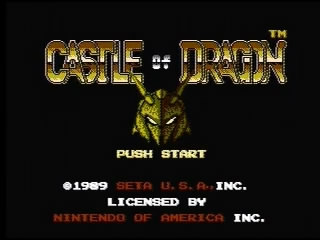 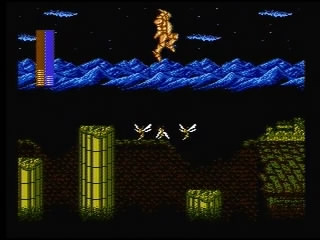 First off, thanks to everyone that keeps SDA up and running. Mike, Nate, Flip, and the whole SDA crew.

A second thanks to Josh the Funkdoc for helping me figure out exactly how the stupid ass jump to conserve power method. It pretty much made sub 9:00 possible by human input.

No thanks to the poverty exchange for giving me this piece of garbage.

It's also obnoxious to run cause resetting keeps your stats. So I have to power down and power on every single time just to have a fresh start.

First off, before the real notes I'd like to rant. This game is luck based crap, absolute stupid fucking shit. These notes will be filled to the brim with horrible vulgarity and anger, twice I died due to the jump simply refusing to work, I've done 0 frame jumps wasting time, and doing the stupid quick kill on both dragon bosses in the same run is goddamn near impossible. So with that said let's begin.

I should explain the power up system, you get a fire sword sometimes, to conserve it you have to jump around like an ADD kid hopped up on cocaine. It's random whether you save it or not. Totally. Fucking. Random. You can get semi lucky and conserve it for long times or sometimes you lose it way early. Try and 100% figure it out. I dare you.

Second, you can stunlock both the cockatarice and the blue dragon. It's all based on damage ratio and very hard to do. It involves knifing both at the start of the fight. Good luck getting it perfect on both of them, it's some near frame precise bullshit. I do my best in this run and am proud of what I was able to pull. Now on to the stages.

Stage 1: I hate the goddamn luck based wizard, one of the dumbest battles I ever had with him where he just cowers in the corner. Still, I kept my fire to him and that was the goal.

Stage 2: Floaty ass jumping mechanic fucking sucks, I was trying to do light low jumps but sometimes the game just moonjumps. I use this to my goddamn advantage and jump over the stupid ass zombie to save some time by having him boost me forward. Did I mention he can STUN LOCK you? Cause he very well goddamn can. The ogre boss goes perfectly to make up for it though.

Stage 3: Perfect as I could get it. Maybe could've nudged closer to the eyeball walker dude thing. Basically wanted to keep the stupid ass fireball sword til the minotaur and beat him. Goal accomplished.

Stage 4 Darklarza Hallway: This stage's goal initially was to get to the Knight near the end with the fireball. I miraculously carried it all the way to Medusa and probably saved a good 10-15 seconds with the few fireballs I hit her with. I usually never get that far. The Blue Dragon swooped one more time then I wanted, my optimal is two and my average is three. The stupid assclown didn't get stunlocked when I wanted it to, and the awful jumping caused me to miss a few hits. I took it simply due to my luck in the hallway making up for any time lost at Blue Dragon. I hope that damn thing spends an "Eternity" in hell.

Stage 5 Darklarza Dungeon: I managed to keep the fire to the minotaur. This is a first for me, it saved a lot of time. My goal was to at least keep it to the fishman after the zombie but I kept it further, granted I still had to hit a minotaur in the nuts with my mace but it's my best run of this stage.

Stage 6 Darklarza Rooftops: I loathe this stage. You actually wanna skip the powerup to kill the harpie things faster. And the second jump, I died there twice. I'm convinced the fireballs knock you out of your fucking jump if you get hit, which is why I hesitate a little. Third harpie fight was ridiculous, I missed a lot cause it's random as all fuck. This has the best end miniboss ever, you fight Flicker the Dragon, why do I call him that? Cause he lags your NES and causes sprite flicker so bad you can't even time your jumps to hit him, you'll hit jump and do it literally a second later. Great goddamn boss! I lock the Cockatarice on the second swoop which is optimal. What a cock-y bastard.

Stage 7 Darklarza Firepit Placething: Nothing special to mention here. I hesitate slightly before making jumps so I don't lose time in the fire by clipping it. Boss I take a little extra time on to lose health so I can get my stupid ass armor back in the final stage.

Stage 8 Darklarza Mirror Hall: I walk into myself and lose health fast, fantastic, the way this works is the less health you have the faster you gain your armor back, it's weird. Time to fight Penisolus the Dragon as I call him. He's a red dragon that stabs you with his large spikey genitals. This fight is dumb, he has a dumb hitbox, you have to hit him... somewhere in the back of the mouth. Regardless it's a semi-fast fight, any fight where you win is fast enough for this stupid prick, pun completely intended.

Well it's over, now you save the dumb princess with no arms and large breasts. Congratulations. Listen to the only good track in this abomination of a game now. Final time is 8:46.

My take on this whole story is that the dragon was desperately looking for a random princess to kidnap, but being as dumb as it was it went for the no armed one. For some reason your knight is too incompetent to get any other princess so this is his one shot at fame. He goes through evil places full of evil things that just wanna kill him because he's too retarded to realize he's saving a no armed princess. He gets to the end, slays the dragon, and just gawks at her like a moron then this story is fucking happy end. What a shitty game.