Released in September 1989, Castlequest is a puzzle game with platforming elements. Follow Prince Rafael as he ventures into the maze-like Groken Castle to save the princess Margarita with his toothpick sized knife. Not only did players have to survive a 100 room puzzle by collecting colored keys, they also had to put up with one of the bounciest, shortest music loops ever heard in a NES game. 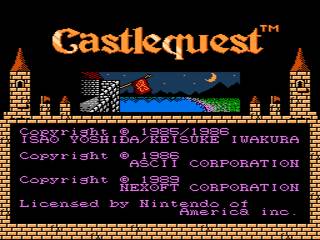 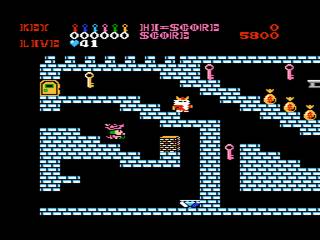 Not the most exciting game in the world, but as with the Lolo games, logic puzzle fans may enjoy it.

There are 100 different rooms in this game, but I only go through about a third of them (if that). You can score points by exploring for treasure, but at the huge risk of using up your keys, with no way to win. For those of you looking to set a points record on this game by visiting all the rooms, be warned...this puzzle is HUGE!

The one death in this run is deliberate. I get crushed against the ceiling by an elevator, but I manage to take a monster with me (one that's almost impossible to get past normally). Once he's dead, he doesn't come back. Since I go through this room twice, this greatly simplifies things.