Released on the last day of December 1998, this is the first game of the Castlevania series that's in 3D. Dracula's minions are beginning to leak out of the castle proper into nearby villages, spreading havoc and looking for a suitable vessel for their dark lord's spirit. Two characters are playable, the standard whip-wielding Belmont and a magic sorceress descended from Sypha Belnades. 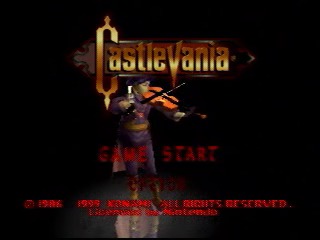 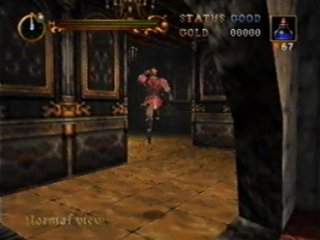 Note: runs on easy aren't accepted because it isn't the whole game: it cuts you off after about two thirds of the game.

Single-segment as Reinhardt 1:04:15 by Baptiste Hornecker.

Single-segment as Carrie 1:05:58 by Guillaume Davidson.

This run is a Carrie run in normal mode. First of all, I didn't pick up either gold, nor any purifying or cure ampoule, in order to spare time. I just picked up three chickens, three roast beefs and one hidden healing kit in the castle center. This was in fact useless, I just ate a chicken against the the two dragon's heads in the castle wall, but I feared I would lack some meat against the last Dracula. Finally, the fight was not so tough. My goal was to solve a well known problem for speedrunners: how to avoid waiting for Rosa. Let's talk about the levels:

Forest of silence: I picked up the moon card at the beginning, this a tip I will explain later. There's no need to say more about this level, I guess.

Castle wall: I didn't have problems here, except against the boss. I had to eat the chicken since fighting the first head with rings is dangerous but I found it a bit faster than loading fireballs, and perhaps less dangerous; this head moves well and always hits me. One important point is that I used my moon card at 1 O'Clock PM to "consume" 5 hours, and this way avoid the waiting time in the rose garden.

Villa: I fought the Cerberus with rings, as they often avoid my balls. There nothing to say about the first vampire, but as you can notice, I could have used my card one hour earlier, I lost 30 seconds waiting, this was the best time I had ever done! At the end, I take the chicken during the fight, while the vampire turns himself into mist, it is not time-consuming.

Underground: I had one problem with a bomb-skeletton, my ball didn't focus him, I began to worry, waiting for the spikes to fall, and finally I got hit and I decided to try a jump under the second ones, although it is dangerous; this time, I had luck.

Castle center: I didn't do a lot of mistake, but one of them annoyed me: the first vampires didn't die as I expected and I lost at least 30 seconds again, which makes one lost minute since the beginning of the game. I just wanted to stress how Carrie's sister at the end is easy with holy water as you can see.

Tower of sciences: I was not far from Dracula, but the roughest part begins, and I decided to be as careful as possible, there are hundreds ways to die in the last 15 minutes of the run. I fear especially the moment after the second key, when I had to jump on two little platforms, while fired on by the guard towers.

Tower of sorcery: It's the level where the pressure is the strongest. There's dark and vacuum everywhere, there are ice men lurking everywhere and as you can see, I prefered to kill the last one, because this betrayer killed me most times during training while jumping on the two last cristals.

Clock tower: The last but not the least, it is still possible to die or even worse, to fall and to lose time! Look at the nice bug in the second room, it wasn't on purpose, I thought it could kill me for a few seconds ! :p. In the last room, falling on the platforms where the third key is hidden is easy, just run and let you fall, jumping increases the risks to fall next to your goal.

Dracula: It could have been faster but I won't whine, I didn't use any meat, and I realised I could have done all the run without losing time with them .

Thanks to cornell711 for the help and to radix and nate for their great job on SDA .