Castlevania: Dawn of Sorrow, the first Castlevania game on DS, was released in October 2005. Dawn of Sorrow is a direct sequel to the GBA Aria of Sorrow, taking place a year after the events of that game. The leader of a cult, seeking to resurrect Dracula, attacks Soma, who then follows her to the cult's base. Gameplay builds off the mechanics of Aria of Sorrow and is similar to Symphony of the Night, with equippable swords, RPG-style leveling up, and gaining souls from enemies in place of magic. 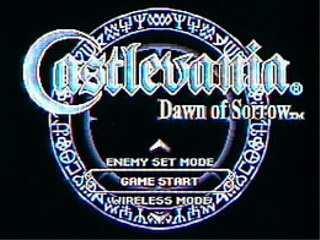 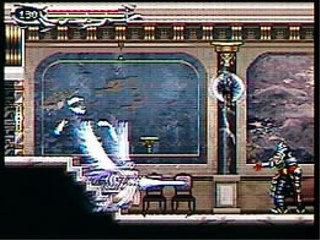 Category Note: Any trick used to warp out of a room is considered a major skip, including the Succubus glitch.

Timing note: The run is manually timed because the suspend glitch breaks the timer.

This is more of a neat trick than an actual speedrun. Pretty much full credit goes to gocha, he worked out the route and made an easy-to-follow video (http://www.youtube.com/watch?v=Z-5p5Xt5y4c) and some helpful pictures.

I recorded both screens this time, but could only do them one at a time, so they may be slightly desynced from one another, but should still convey the important bits. Once you learn how to do it, it's surprisingly easy (only took like half a dozen attempts to get both screens).

Here's the gist of what to do and how it works.

The first two parts are the most important of all, so once you SG through the wall, slide twice immediately/near perfectly. The goal on this is to trigger the top-rightmost box on the first pass. Then you keep sliding a bit more until you're situated just to the right of what the map shows (the bunch of 2x2 rooms). Stay here for about half a screen and then slide again very precisely where I did. Of the rooms you triggered on the first loop, there's a stack of 3 2x2 rooms, you'll want to slide when you get to the center of the middle 2x2 room. There's a large-ish blot on the top screen that you can gauge yourself by. These two steps determine whether or not you can get back in after suspending, so learning this right away is best.

From that slide, keep sliding for 3 loops. Stop where I stopped on the map, it's where you pick up Black Panther. Timing's pretty lenient, you get Black Panther near the top, so you can be a little late to get there, just don't overshoot. Start sliding again once you hit the top of the screen and keep going until you're slightly left of the map and stay here for one extra loop. The sliding to here got you Hippogryph and other ability souls, the timing's not strict on them. Staying here destroys your clock and also affects you getting in the room, but it's okay to under or overshoot a bit.

After the extra loop, slide twice after you go off the top of the screen. No idea what this does, but do it anyway. When you go off the screen again, wait for a short amount of time (after you're off the top but before you appear on bottom again) and the start sliding again until you line up with the right side of the 2x2 rooms. Same line as before. The start of the slide to get here determined whether or not you skip Menace, so slide sooner/later if you don't get that.

Now you wait for 6 loops. If you don't want to count, the bottom screen shakes on the 2nd and 6th loop, so you can just watch for that. On the 7th loop, start kicking about 3/4 of the way up and stop when you're just left of the Garden of Madness save room (and right of the warp). Slide just before the bottom of the big 4x2 room and you should see a blue square pop up in the bottom right of the map, meaning you activated the Abyss warp. The timing is apparently tricky, but just copy where I did it in the video and it should be pretty easy. Now you just pause, equip the things you got, and suspend/reload.

As far as the run, there's a couple decisions that might seem odd. Firstly, I drop down with Valkyrie instead of switching to something like Werewolf after the straights. I tested it a bunch, and there was basically no difference (something like .2 faster was the best I got), which wasn't worth it for the additional menu since this might be timed according to non-game clock rules.

The other is that I don't jump up the stairs when leaving the Abyss warp room. This is because it's way too difficult to time a jump perfectly getting out of the warp, land on top before the loading screen and then jump again on the tiny platform after the loading. It's something like .15 seconds lost, which didn't affect the runtime regardless of how I timed it.

Anyway, thanks for reading/watching, and sorry to disappoint anyone who came to this page looking for a real DoS run.

Thanks to Mike for submission help and most likely timing help. Thank you @ nate for encoding and possibly editing.

This is to make up for the only other run for this game being a glitch to skip the entire game. Fair warning though, there are a lot of menus.

I can't decide if this was an easy or difficult run, it took a ridiculous amount of effort, but I never really ended up making mistakes and there's only a few luck dependent bosses. Because of this, it only took a little over 5 hours of recording total to get this time. Granted, it felt like longer since it requires a ton of focus to do everything as fast as this. In fact, watching it again for these notes, it really, really looks like the video is sped up a significant amount.

While this is the first boss rush run on SDA, there's been quite a few really good records floating around on youtube for a number of years. StuckInAPlate's strategies got him times in the upper 1:20s and the few active people just competed to see who could pull the strats off best. Unsurprisingly then. they served as the basis for this run as well (only the last two bosses are different). The changes came from a TAS with mostly inhuman strats and even more menu time. Could the time be improved? Yeah, a lower time is achievable, but without changing the strategy, I don't think lower than 1:17 is possible.

Boss Breakdown - If you want instructions on exactly what I did, use this guide http://www.gamefaqs.com/ds/922145-castlevania-dawn-of-sorrow/faqs/43893 It explains everything way better than I'd be able to in these comments. I made very few changes which should be clear if you can understand what's going on.

I make note of the splits on the bosses that I pay attention to it. It's amazing how when you're concentrating you can see the numbers exactly when they pop up and read them. Reviewing the video afterwards it just looks like a blur.

Entry Room: It's really hard to hold up, right, and R on my DSlite. I had way more restarts here than I should have because I wasn't holding everything hard enough.

Flying Armor: Super easy. Restarted if I had 2.00 or higher but that wasn't very often.

Balore: He just takes timing, the difficult part is to start the special before Devil triggers and have the skull hit him right as it activates. 5.xx is possible, and I had some good streaks of it, but I didn't reset for it (this time was 6.0x).

Puppet Master: Main thing to keep in mind is not to cancel into the special too early. It might be possible to use Killer Clown and Ukoback in this fight, but it'd be really hard to implement

Dario: The first time I saw this combo I thought it was the most amazing idea ever. It's very disorienting to throw the card before landing and then not get the backdash, which happens here. Doesn't lose any time, just disorienting. 22.xx is good, which I got.

Rahab: Aim for 26.xx here, which I just barely got. I have no idea if changing when you throw the Bomber Armor makes a difference.

Gergoth: Another button mash boss. It took a while to get my left index finger to tap quickly. I played around with changing the controls to throw cards faster, but could never get anything faster than normal (since if you throw too fast you swing your weapon). 32.xx is great, a minority of runs got this time.

Zephyr: The one spot of bad luck I had. He's supposed to stand still but instead I got hit and lost about half a second. Regardless of how fast I mash I can't kill him if he moves forward. For anyone looking to beat this, if he does this pattern, start backdash spamming cards. Didn't think of this until well after doing this run.

Bat Company. No idea why I paused. 41.xx is the goal here, I've gotten 40.xx once. Also the first menu mess up after this fight. This boss was the only source of glitching during the run. Sometimes I'd hear the sfx for the bombs, but nothing would come out (still lost MP), and a few times I'd do the Death Scythe special and nothing would happen. Pretty confusing during a run.

Paranoia: This is the first change from the old strategy. Used to use Abaddon, but Ukoback is way faster and not random (this fight used to be a huge run destroyer). I placed the fires really well and my timing was great. 48.xx is the benchmark. I got 47.xx once, probably after the 40.xx Bat Company.

Aguni: Took another hit, but it happens. This is where most of the runs were ruined, Abaddon is finicky and usually doesn't hit often enough, so you HAVE to hit with the skull of the special (does 200 more damage), and sometimes the scythe parts hits from really far away and ruins it. Worse than that is his patterns though. He only has two acceptable ones and they're pretty rare. I got under a minute this run, which has only happened maybe 4 times.

Abaddon: He only has two bad patterns, so he's pretty agreeable. Sometimes the Bomber Armors don't hit from behind, but it worked out this time. I don't need to pause to change equips, but I do it because I need a second to think about what he's going to do and where I have to be to not get hit. I got super lucky this time with blocking all of the locusts (it was what I thought was a bad pattern) and in the menu afterwards my mind blanked out because I couldn't believe I didn't get hit.

Death: This guy sucks. You have to get lucky twice on him. I've only had good runs get the right patterns twice, the first would have been slightly slower than this but I forgot to activate Devil. Everything except menus went well here and I was very happy. I hesitated during the first part since I was thinking through the fight and preparing to mash. On the second part, I went back to the Chaos Ring a couple times because I couldn't decide if I wanted the Rosary instead. It's not necessary, but it had become habit to put that on.

Thanks - StuckInAPlate for the strats I stole, Persona for linking a TAS with other strats to steal, and everyone for watching (sorry again about the menus). Mike Uyama for lots of things, nate for encoding, and SDA for being an awesome place.