Released in September 1995 by Konami, Castlevania: Dracula X (known in Europe as Vampire's Kiss) is a rerelease of Rondo of Blood for the SNES featuring different art, redesigned levels and the lack of Maria as a playable character. Similarly to Rondo of Blood, this game follows the story of Richter Belmont as he backflips his way through Dracula's castle in an attempt to free his lover Annette. 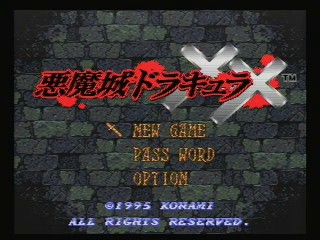 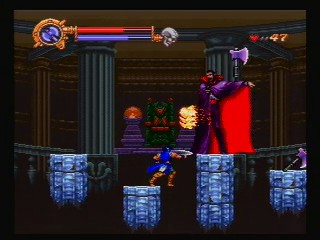 This is Castlevania: Dracula X, a semi port/remake of Rondo of blood on the PC-Engine

This run is clocks in at 16:17, an improvement of roughly 35 seconds over the current run on the site thanks to a skip found in stage 5 by joecoolgames.

The two main ways i move Richter about are with a backflip or a straight jump and this is down to the slow walking speed of Richter.
The backflip is slightly different from Rondo as in you dont always need whip cancel due to it being same speed to chain backflips together however i do whip cancel in certain
places as to not slide off an edge or to line myself up to collect an item or hearts.
You can also do an item crash at the cost of a set amount of hearts which will deal massive damage to enemies on screen and makes some of the boss kills much faster.
There are two notable damage boosts that are used in stage 2 and stage 5 which uses the Armour Knights spear to propel Richter through the ceiling.
Hold crouch whilst getting hit negates knock back and i use this a lot throughout.
Certain enemies such as bats and medusa heads only spawn in the direction that Richter is facing.
Falling from a height and whipping just before you hit the floor will stop Richter going into a crouch animation and in a few areas i will whip mid air to put Richter
into a standing posistion that will push his sprite ontop of the object, notably the start of stage 3 and someother moving platforms later on.
There are no multipliers for sub items in the game, like Rondo, they are tied to heart count so up to 10 or 10-19>1 20>2 30+>3.
With that said lets go through each stage.

Stage 1
Notable differences here are the second screen which is notably faster in execution however i let myself down on the third screen with the medusa heads
by messing my backflip rythem up resulting in one lost back flip.
Cerberus is also massively faster than the previous kill, i use two item crashes from the cross to kill him in two rounds.

Stage 2
At the end of the collapsing bridge i use a backflip onto the last platform before the drawbridge to save a few frames on Richter entering the castle.
The first big damage boost of the game, the old strat was to lure the armour knight over and use him to boost you to the base of the top stairs, that was slow,
the strat now is to get to the second floor as fast as possible so theres no longer a need to lure them anywhere
Phantom bat fight is the same as before due to the boss only able to die when fully formed, i do use a backflip and mid air cancel to grab the orb slightly faster.

Stage 3
This stage is essentially the gate keeper!
More runs got reset here because of a damage boost involving a bat to get to a set of stairs 6 seconds faster than riding the platform.
The bat boost itself is dependent on a two pixel window on a coloumn and the highest delayed backflip possible all whilst being at the mercy of iframes.
Its also important to note that stage is where the endings divert, by dropping down i opt for the bad ending leaving both maidens behind.

Stage 4'
The damage boost to get through the giant skeleton is different, using the slide from the backflip i slide into and because im in a crouch theres no knockback.
The mud men room i managed to kill the first mudman on the frame it spawned which stops the second from spawning and after this i can utilise the ceiling spikes
to make two small damage boost through the remaining mud men and a bat.
I had plenty of hearts for the boss of this stage, not shaft but looks like shafts ghost. Easy enough i juggle him right and left through phase one and phase two
i hit him 8 times.

Stage 5
I got trolled by the flea men that cost me 3-4 seconds.
Now is the real change in route.
I manipulate the Armour Knights to the right and then pull them back to the left so they can boost me up and through the ceiling to
the stairs skipping the bottom route completely!
The werewolf gave me some interesting patterns but overall the kill was still fast.

Stage 6
I miss a one frame backflip on the 3rd screen but made the time back by not item crashing onto the elevator and using a bat to take damage instead.
I keep the axe i picked up prior to fighting the werewolf because the boss fight has been reworked.
The old strat for Skull Sorceress was to use the cross and the fight was rarely over before the homing eye phase, using the axe the fight is similar to the stage 4 boss.

Stage 7
I have a pretty good heart count but im still at the mercy of Draculas spawns, he can spawn on any platform in his chamber and its completely random.
I got lucky as he only had one off screen spawn although i nearly got knocked into a pit during phase 2 so i use two item crashes to finish him off.

Didnt expect myself to write so much!
Shoutouts to Golzil for the route, Joecoolgames for the stage 5 boost, Aldueco for various small time saves and Just_defend for convincing me to submit.