Castlevania Judgment was released in 2008 and is the first fighting game in the franchise. The game features over a dozen characters from various games in the franchise, including Simon, Alucard, Maria, and of course, Dracula. Galamoth has sent back a being named Time Reaper 10,000 years back in time to alter history. Using the power of a time rift, Aeon has called forth the best in the Castlevania universe to stop this plan from happening. The game was heavily criticized for its disorientating camera, unbalanced characters, and the character designs that resembled too much like Death Note and not enough like Castlevania, and praised mainly for its excellent music score. 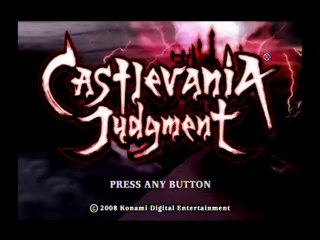 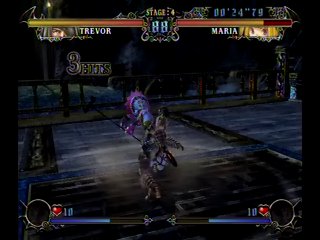 Right on time. Welcome to the time rift.

Castlevania Judgment is a game that has when first announced, made me wonder what Konami and IGA were thinking. The first images and videos I saw scared me. I thought this was gonna be a complete bastardization of the franchise, even more then Simon's Quest or Castlevania Adventure. Luckily, it's not as bad as I expected, but it's far from being the best Castlevania game (or the best fighting game).

This run is done on Arcade mode, which pits your character against 8 fighters (the last always being Dracula). Once you defeat all 8, you win. A timer is kept and is active whenever the fight is going (unless an uber special is underway). Unfortunately, Konami totally dropped the ball on this, as the scoreboard has NO separate categories for round, difficulty, or fighter. With this in mind, I decided to just go down to Easy Difficulty, 1 Round matches and just wax everybody with Trevor, who by far is the most powerful character, as this video demonstrates.

Trevor has a nice 5 hit combo that can take a good chunk of life, and his unbreakable attack works well against most characters. Also, you'll notice that I use the uber special...A LOT. Why? Because during the uber special, the timer stops, allowing me to take out the last portion of life without the timer running, allowing a lower time.

When I initially completed this run in December 2008, my initial time of 1:08.56 I felt was a very good time. I figured based on how battles went that 7.5 to 7.75s per fight was optimal (save for Dracula). After submission, I kept playing on and off, and then managed to beat the time by a short margin (1:06.08). I cancelled the run. Mike sent me comments from ther verifiers with an idea on how to improve it - whiff the first hit in the 2nd time through the combo.

Taking that idea into practice, I managed to cut the time down further. I managed to get it down to 1:03:44, also an impressive time. I was tempted to submit that, but waited a bit.

Then one day, I decided to take the verifier's comment one step further and whiff the first TWO hits in the 2nd combo. And suddenly, sub-7 seconds for a match. It completely blew my mind away. And with that, went about another month or two of practice, restarts, controller throwing, and more swearing then even Tiki does.

Finally, after umteen and a half restarts, I managed to get the best lineup imaginable - no Eric, no Golem, and no Death. The first two I know for certain I can't get under 7 seconds (Golem requires an extra hit, and Eric has absolutely bizarre timing). Death I rarely ever see in Arcade Mode (like once every 200 matches), so I don't know if I can pull sub-7 on him either. And at the same time, EVERYBODY cooperated. No overblocking, evading, or just generally being stupid. My long months of frustration FINALLY paid off!

I initially thought sub-1:04 was optimal, but sub-1:00 is absolutely fantastic. You may get about another 3 seconds off (if you're lucky on Dracula), but the margin of error elsewhere is absolutely minimal. The fastest fight I've had with Trevor to date is 6.71s. So if you could do that to everybody (good luck), that would mean another 0.87s off the fights in this run. So, in theory, you could get sub-56s, but you'd have to be a robot to pull that one off.

I hope you enjoyed this run, even considering how little I change things up. If nothing else, this should show you "The Power of Legend".

And for those that don't want to do math, here are the times. And for those who haven't played, with the character name I'll put in info that tells you where they were pulled from the Castlevania timeline to the best I can gather.

Other Characters (Not Shown):

So, there you have it. I've been studying the game to find good and enjoyable modes to speed run, but everything in this game (including arcade mode) has issues. Story Mode could be done, but the best way would be on true story mode, cause then you don't have to do EVERY character back to back plus 1 more FTW. Castle Mode is really obnoxious and boring to play, as it repeats pretty much 3 quests over and over (defeat the boss with hyper, defeat the boss with sub-weapons, collect hearts). Plus since you have to clear every room, it takes about 25-30 minutes to do. It's doable (I've thought about it), but I just don't know. This is all my opinion, of course, so take it with a grain of salt.

This run is Copyright (C) 2009 Nicholas "Sir VG" Hoppe and IMAMYTH Colosseum (http://www.imamyth.com/ and http://www.youtube.com/user/SirVG) and is allowed for downloading and private viewing. Permissions for hosting this run have been granted to Radix and Speed Demos Archive. Public viewing of this run is prohibited without prior permission from the creator. The selling or distribution of this run for profit in any way, shape, or form including (but not limited to) selling on eBay and television for profit is prohibited without prior permission from the author. Hosting on other websites is prohibited without concent from the runner or IMAMYTH Colosseum. Any violation of the above listed may result in legal action. Castlevania Judgment is Copyright (C) 2008 Konami.

Long story short, I tested out just about every character to see which seemed like a good candidate for doing a speedrun. I needed a character that:

It seemed only Alucard fit the bill (and sadly too, because I'm not much of an Alucard fan). Lets talk about what I use in the speedrun regarding Alucard, and it is a combo string of:

Most characters have quick starting attacks but what made Alucard more special than the others is his Summon Spirit. From my knowledge, it is one of the quickest recovery attacks in the game that doesn't have to be a starting attack. So I simply do this combo, and keep repeating the same combo until my Hyper meter is full for a Hyper Attack. Since I break the combo, damage nor Hyper meter gaining is scaled. The good thing is that even if the opponent blocks a few attacks, I can still gain enough Hyper meter and defeat the opponent without any trouble. The bad thing would be that after each Summon Spirit, the opponent has a chance to break the pattern.

That is where luck comes into play.

So since I do the combo three times in a match along with a Hyper, that's three chances to mess up per match, ruining the run.

Battle 1: Grant - Everything went fine. Would have been a bit faster if Grant ran towards me.

Battle 2: Trevor - The Summon Spirit before the Hyper seemed to follow Trevor and didn't hit as quickly as it should.

Battle 3: Alucard - I delayed the combos a bit because he was blocking and I didn't want to push him too far.

Battle 4: Eric - He decided to start running away and I didn't want the first three matches to go to waste considering I was lucky nine times, so i played a bit more patiently and finally landed my Hyper Attack.

Battle 5: Aeon - When I realized Aeon was blocking too much and I didn't get enough meter by the time the third combo finished, I was just about to put my controller down and call it a failed run but Aeon decided to attack me, giving me the last bit of meter so I continued with my Hyper Attack.

Battle 6: Sypha - This is just about the same as the Grant battle, but it was faster because Sypha didn't run away when I did my Hyper Attack.

Battle 7: Death - This match is a bit different. Since it's possible to push your opponent to a ring out spot, I pushed Death to the spot and decided to do a knockdown attack to ring him out. Doing a combo of Directional Combo x 3 would be faster than the actual combo I performed (Neutral Combo x 5) but I decided to play it a bit safe since the Directional Combo x 3 sometimes doesn't aim you in the direction you want.

That's 22 chances to mess up (it would normally be 24 but Death match is different) in a single run. I consider this run performed well. Well to my standards anyhow.

For a completely perfect run, it would probably have to be like the Sypha match every time, And I'm guessing altogether the time could be shaved to about 39 seconds.

Special Thanks goes to:

-SDA Team
-error1 and nate with the encoding
-Sir VG