Released on November 30, 1999, Castlevania: Legacy of Darkness is the game that Castlevania 64 should have been. Legacy of Darkness is a sequel, a prequel, and a remake all at the same time. While Reinhardt and Carrie return, you have to play through the game first as two new characters: Cornell, a man-wolf looking to save his sister Ada in events 8 years prior to Reinhardt and Carrie's stories; and Henry, a young boy originally saved by Cornell who comes back later with a mean 6-shooter to clean up Reinhardt and Carrie's messes. This game features new levels, new music, new bosses, and old levels completely revamped to create a completely new experience. 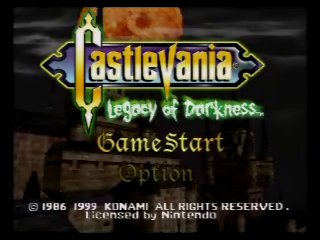 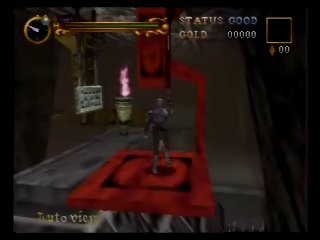 Castlevania: Legacy of Darkness for the Nintendo 64

IMPORTANT: I played this game in LO-RES because I notice some FPS drops playing in HI-RES. I guess it's due to the high textures in the game so I'm not taking that chance.

Henry has his own quest separate from Cornell's. The event takes place 10 years after Cornell's Quest where Henry, at the Age of 18, has become a full fledge Holy Knight armed with a pistol and his quest is to rescue all the kidnapped children throughout Castlevania within 7 Days. This is at the same event where the quest of Reinhardt and Carrie would begin in Castlevania 64.

Consider that Henry has his own quest he is one of the strongest characters in the game. His main weapon is the Pistol. With the longest attack range he can fire up to 6 times in quick secession before having to reload. Also he can withstand damage better than the others but his only drawback is that he moves slower and has the shortest jumps. There are a total of 6 children in this quest that you have to rescue and after that the game is over.

-First Encounter with the Giant Skeleton

I got lucky getting two powerups in this battle. It helped me and I don't have to worry about getting the powerup drops later. You can only hurt it when it stops and summons the lesser skeletons so I let it run around till it is defeated.

-1st Child in the Forest

I don't know if this was intentional but there is a hidden passageway leading to the 1st child going through the platform section in the level.

-Second Encounter with the Giant Skeleton

This one has a few new attacks but the same method in defeating it still applies.

-2nd Child in the Left Tower

Heading towards the left tower you go up the stairs till you get to the section with the rotating platforms. To the right you'll find the 2nd child so you might have to change the camera view to locate the child. Thankfully there's an invisible platform leading to the child. Then I backtrack down the stairs and took the fall damage which it was faster and then exiting the stage shortly after.

-Encounters with the Hell Hounds

Despite a few damage taken in the battle, this fight was easy lol.

I climbed up the fountain to get the Sun Card and Moon Card since it was needed for later.

-Into the Garden Maze and finding the 3rd Child

The 3rd child was located in a small area next to the Thorn Fence Gate of the maze. After that I head on over to the Copper Door of the maze which leads me to the next door heading to the Dungeon.

-The Coffin in the Dungeon

If you made it here before the in-game clock hits 4 pm then you should be good. The Coffin teleports you to three different stages depending on the time of day. Each stage there is a child you have to rescue. I did it in an order upon entering into each stage in this run.

-4th Child in the Waterway

This level has a lot of hazards. I did some tricky jumps across platforms to save time. The child is located in a spot where you have to jump in area above to get to the child. Then I backtrack to the crystal you seen in the beginning to teleport back to Villa.

-5th Child in the Outer Wall

Here's another level with hazards and some platform jumping. After taking the elevator the 5th child is located above in an odd spot on the pillars. The normal route to getting to the child is climbing one level higher and then dropping down from the top. Instead I saved time by jump towards the child from an angle at same high level. Then after I backtrack through the stage and taking fall damage before leaving the stage.

*HereI used the Sun Card before entering the coffin*

-6th Child in the Tunnel

This should be the final stage and the final child you need to rescue. This is one of the longest stages in the game you have to get through so it would make sense to do this stage last. There are some hazards and enemies you have to get through and the child is so far away inside a room. The difficult part in this stage is the platform jumping across water hazards. The camera view tends to go into Auto View during certain sections which can confuse your movement and making drastic mistakes. Here I played it safe through this stage. The 6th Child is located towards the end of the stage behind a Moon Door which you will need to use the Moon Card to open. If this was the final child you've rescued then the game is over otherwise you'll continue on the quest.

The quest took about a day and a half in in-game time to rescue all six children within 7 days. It's hard to imagine if you could rescue all the children in a single day but I think it is not possible due to certain situations in the game. There are bosses at the end of each coffin stages which they're optional to fight but at the same time it is necessary to complete Henry's Quest if you failed to find all six of the children within the 7 days before the castle collapses.

I got the time of 17:18.58 in this run. From the time which I start controlling the character to the time ending when I rescued the final child and the ending credits starts to roll. I believe it's possible to get a sub time of 17 minutes in this run but that will take some luck with RNG with the enemies and the item drops. This run can be improved either way.

This is a fun quest to do for Henry. In the meantime I'm still working on getting a decent single segment run for Cornell main quest is very brutal and even longer than the first game. So yeah it's still a work in progress. I think that's it. Thanks for watching this run.

Special thanks to SDA and everyone else in the community. You guys are amazing at what you do!

Now this is a run that I am satisfied with. The last time I submitted a run I had a few mistakes and I lost some time from them. To me this run is good but it can still be improved even further! By the way, this run was done live on twitch http://www.twitch.tv/demonflip84/c/4341860

I won't go into too much details about each level in this run but I will go over the key points.

Cornell is a "Man-Beast". He can transform into a Warewolf to deal extra damage to his foes. However there are a few drawbacks to using that ability. You can only transform when you have a sufficent amount of jewels to activate it. (I think about 15 Jewels.) Once activated you cannot turn off that ability until all of your remaining jewels has been depleted. (This is obvious why I don't use this ability often.) Also you cannot use your throwing items.

Now that's out of the way the obvious thing you'll notice throughout the run is that I'll be jumping alot because you move faster that way. Also I had this whole run planned out so I'll be picking up gold, jewels, and food as needed.

Foggy Lake - I had an okay boat level and I 1 cycle against the Sea Dragon Boss.

Forest of Silence - I didn't have too much touble getting through.

Castle Wall - The Towers of RNG did slow me down abit because I didn't get the best platform patterns so I had to adjust for them.

Villa - I did alot of backtracking between the Mansion and the Garden Maze. I had take a specific route in order to cut down the time obtaining the items needed to go forward. Also I had to escort Young Henry out of the garden to safety and I got rid of a strong vampire inside a dungeon.

Outer Wall - I did alot of climbing in this level and I took down a this flying boss with ease.

Art Tower - I took some high risk strats in this level to save time however it can still be improved because I had to slow down in some parts.

Tower of Ruins - This is a tough level to improve although I did okay getting through.

Tower of Science - I had a few mishaps in this level. The boss fight in the end was good.

Duel Towers - I thought I did good in the boss fights. This is another level that needs better improvement though.

Tower of Execution - Tough level to get through. I would like to improve this level without having to slow down due to the hazards.

Tower of Sorcery - Too many hazards that can end the run if you go too quickly. Although I thought I did a good job getting through this level in one piece. I can still save alot of time in this level alone. One of the hardest levels to improve.

Clock Tower - I thought this is one of my best levels I've done out of all the attempts I had trying to improve it. Once again this can be improve better.

Castle Keep - I had a good Count Dracula fight. The Dracula Ultimate fight however I had a few costly mistakes and I had to replenish on health a few times before ending him.

Well that's pretty much it to this run. Personally I thought this run was good but then again this run can still be improved. There is not alot of glitches and shortcuts that I am aware of in this game using Cornell. Expect to see an another improvement sometime soon as I am still finding ways to improve the route. Until then I hope you enjoy watching this speedrun.

Special Thanks to the people of the Speed Demos Archive community for all the help and inspiration for making this run possible.