Produced in Unity and released in 2014, Chameleon World takes the Jerry Paper album Big Pop For Chameleon World and places the player in an interactive world that seems to be based off of the songs of the album. Be prepared for some weird stuff as you guide the main character (who may or may not be Jerry Paper) as he purges his mind of the world’s unenlightening dross. 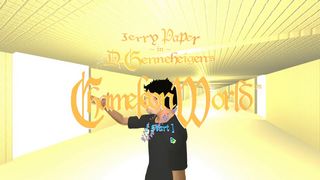 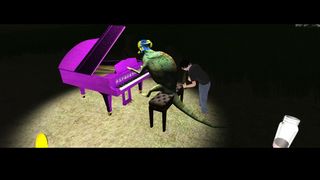 This run is pretty simple, not hard to understand, only one major skip. I only picked it up because I'm a fan of Jerry Paper's music. But anyway, let me explain what is going on here.

The route in a normal playthrough would be to go into level one, pick up the purge jar, finish the level, and leave. None of the other levels are unlocked until you do this, so it seems to be the only path. It is not however. In my speedrun, I utilize a glitch that allows me to clip above the main hallway and then jump down into certain levels, bypassing the door. This is done by quickly entering and exiting the side room with the blue door (Usually the hallway despawns when you pass into the door and respawns when you come out. By going in and leaving fast enough it switches which side you have to be on to have the hallway despawned, enabling you to walk along the outside wall of the hallway), then walking along the wall to the next door over, jumping repeatedly to gain height, and finally jumping down into whichever level you want. I picked level 10 because it is the fastest to get through.

So once you're in a level without having the purity jar, upon purging at the end of the level you will simply be given a purity jar and will not have technically beaten the level*. Upon returning to the main hallway, the doors will all still be locked. If you were to enter level 1 at this point, the chef would not be there to give you the purity jar, and you would have to purge at the chameleon to finish the level. Instead of doing that, I did the glitch again and entered level 11. I picked this level because in it you must obtain 12 Chameleon bucks, which can be gathered very quickly if you have fast mouse movement. Instead of getting only 12, I got 32 and used the extra 20 (which stay in your inventory throughout the game) to skip most level 8, in which you must obtain 20 chameleon bucks through very slow dialogues. This probably ended up saving time, I really don't know. It seems like it would though.
*I'm pretty sure this is because every time you purge the game just ticks a counter up by one. The counter most likely starts at 0, and when you talk to the chef, it increases to 1, which gives you the jar, but that specific dialogue skips the animation. So when you first purge without the jar, the counter at 0 goes up to 1, giving you just the jar.

The main reason this glitch is so useful is because upon returning to level 1 with a purge jar with one layer of vomit in it, both the chef and final chameleon are there. Talking to the chef fills the jar by one, and talking to the chameleon does as well. This gives you one more layer of vomit than you should have, and allows you to skip a level if you so desire. I skipped level 4 because its by far the slowest level besides the last. This skip is what got me the sub 20 time, never before done.

The rest of the run is fairly simple, nothing really crazy going on. One thing to mention is that upon purging at the end of a level, instead of reaching the exit (which can sometimes be very far away), you can simply pause and "Return to the main tube", saving tons of time through the run. Also, when you enter or exit a level, you can control your character before the white fades away, so I do that a lot. And finally I jump up the mountain on level 9 because the game wasnt coded well and its faster to jump up than walk around.

I would like to thank The Green Giant for creating his speedrun of this game and motivating me to try it as well.