Released in September 2008, Civilization IV: Colonization is a remake of Sid Meier's Colonization. The players take control of settlers from one of four European nations and are trying to colonize the New World in the period between 1492-1792. The game runs on an updated version of the Civilization IV engine (hence the game title). 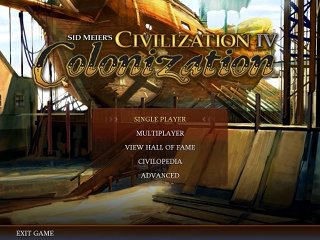 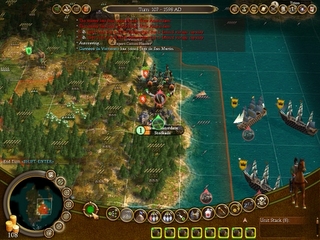 Civilization IV: Colonization is the remake of Sid Meier's 1995 Colonization using Civ IV's game engine. Condition for victory is for the colony to gain enough rebel sentiment and declare independence from their European nation and eliminate the Royal Expeditionary Force sent to subdue the revolution. The game rewards you with a smaller REF if you declare independence very quickly with a smaller settlement. The lack of income due to a smaller town can be remedied by focusing on trade with the Indians and exploration with a seasoned scout for treasures. The income goes directly to purchasing troops in Europe to fend off the REF.

This was the fastest run after many attempts, although the luck in treasure drops were more responsible for the fast time than my execution, which was rather sloppy.

-Select Dutch, for their starting merchant ship with 4 cargo spaces. Sail back to euro for a season scout and guns.
-Place a settlement with a big fish(4+food water tile) and a lumber tile(at least 4+ yield tile). Food+lumber mid tile is a big plus. gather food/lumber as needed with the 2 starting population
Build in this order:
PP for the two FF with a. faster euro travel time b. -cost for recruit in euro
school
printing press (your pioneer's tools will cover this)
rest in PP or MP
-Use the scout to explore for as many treasure as possible.
-Use the merchant ship to trade with the Indians, focusing on guns
-After the 2nd FF joins, buy Statesman and Galleon from euro. Add the statesman to the work force in your one settlement. Start training 2 more in school after printing press is done.
-Use merchant ship and galleon for trading guns/horses with Indians. of course bring back treasure to euro with galleon
-Start LB production when the 2 statesmen finish training, make sure enough food is saved up.
-Start buying more immigrants in euro and turn them with dragoons, bring them to NA, but don't join the settlement.
-Declare independence as soon as Rebel sentiment hits 50%. Should end up with more than enough dragoons to deal with the relatively small REF
-I also build enough MP so that I can receive a FF with Indentured Servants within one turn after Declaration of Independence for a larger army, although ending up with not enough guns/horses to arm them. Turns out they weren't needed to defeat the REF anyways.

Thanks to
-The awesome people running SDA, I've been checking out runs for my favorite games on this site since forever. I'm happy that I can finally contribute to it.
-The anri-chan creators, just WOW. That thing is so easy to use.
-The helpful folks on my planning thread, thanks for all your encouragements and kind words.
-The good people over at http://www.civfanatics.com/civ4/colonization. Without their helpful guides breaking down the game's mechanics, this run would not be possible.

Can't say I'm very satisfied with this run, however I will wait until I have a faster computer to improve on this. I think with perfect execution combined with good treasure drops, it's possible to shave 2 more minutes off the time.