Cobra Triangle was released in 1989 and developed by Rare. Best described as a mix between RC Pro-Am and Gradius, the game has also a few twists of its own. You battle through 24 action-packed levels, including 5 seafood boss battles. Without a sequel, the game still stands unchallenged among river running action games by offering top notch gameplay, original level objectives, and a complete lack of storyline. 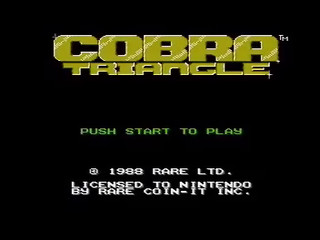 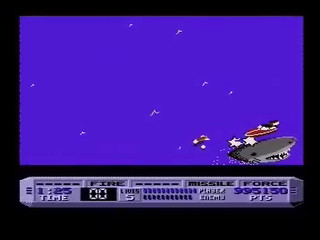 1) I reset on stage 1 75% of the time. I want to get two early pods before the 2nd guaranteed pod, as I can get an early speed upgrade. This usually saves a couple of seconds. I reset if I don't get 0:29 or better...

...excep this sort of sucked and was a 0:28. I kept going because I got a 3rd random pod, which meant I was only one away from getting early missiles from stage 2. I almost NEVER kept going after a 0:28 otherwise.

2) This was actually awful. I mean, the luck was fine, but I miss a jump like three times. It was near this time that was saying to myself "Why am I even playing this today? I'm playing like garbage. I think my d-pad is broken too". No, dying didn't cost time and didn't matter.

3) Can't complain. If you dispose of the last mine at a certain angle, it blows up quicker. I got that to happen, but it didn't also blow myself up, which is too bad because it looks funny.

4) Usually time-loss here stems from getting hit by random bullets, or the log patterns getting desynced. No, I just ran into the wall too hard.

5) Early missiles speeds this up a little. 0:57 still not possible though.

9) I have to pick up 5 random pods without wasting too much time. Usually, 5 don't appear and I have to reset. Went smoothly this time, only lost about 1 second (probably because I ran into the wall?)

10) This is the huge road block of the game. He was VERY cooperative until he was down to 1 health. If he died before knocking me back, it would have been INSANE. Instead it was just "very good", but looked ugly. Oh well.

Early missiles saves about 3~ seconds on average on stage 10, so as long as it doesn't cost me 3 seconds to pick up the extra 5 pods for force, it's worth it.

12) This stage took the most practice out of anything. If you act exactly the same, then HOPEFULLY the icicles act in a predictable manner, but that's not usually the case here. I got a 1:06, which is super rare. This is the 2nd best performed stage in this run, which is weird to say because it was basically perfect.

13) The dispose of mines levels were probably the most improved strategy-wise of any of the levels. Basically just taking more aggressive angles and hoping the enemy boats don't get stuck or anything. This was real nice.

15) I was probably typing and stuff during this. Just had to make sure a bomb didn't hit me into a 2-pod.

16) Most of the enemy boats get stuck into the walls if you go here, so that's why only 1 spawns at a time. I messed up a little so there are still 2 men left at the end, but I'm not in the business of taking chances on this level.

17) This is pretty hard. You have to turn slightly twice while mashing fast. There is some room for error though, but I did it without getting knocked back this time (hurray!)

20) This is usually not too hard if you keep track of what log cycle should be coming next. There's usually a tough dodge at the end, though.

21) Here's the best stage of this run. This level is freaking hard and was about a 40% success rate. Almost anything can and will go wrong. If you look at the 3rd mine, the enemy boats collide with each other, and come screaming in at me after a delay. I barely make it in time.

Anyway, 0:41 ties my best practice time and is extremely rare (like 5% during practice?).

22) This is always really tense when I have a good run going. I've definitely thrown it away here.

24) Screw this guy. About 30% chance of a good pattern. This was the 2nd best luck, which is not even a guaranteed kill, because his hitbox is so weird and it's hard to tell where to even shoot in the second phase. Sometimes 3 damage isn't even guaranteed. I barely got the kill here.

Anyway, the run is insane. I thought it was insane when it was 10 seconds slower, and basically luck and execution has been the only change since then, so that should tell you something.