Coma is an artsy puzzle/platformer flash game made by user "wittyhobos" on newgrounds. The plot is that your character, Pete, is in a coma and needs to be woken up. Gameplay is straightforward and, for speedrunning purposes, consists of a series of precise jumps and fast text skipping. 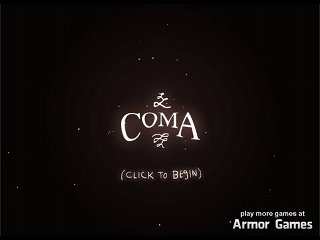 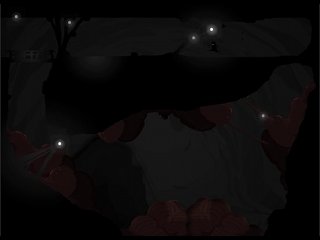 This is a neat little flash game that everyone should play, if only to listen to the great soundtrack that goes with it. You'll get to hear quite a bit of it since the game is quite confusing on the first playthrough. Eventually though, it just comes down to moving left/right as continuously as possible, which took a lot of practice to do. It's definitely one of those games that's more fun to play than to watch, so I'd suggest trying it out for yourself, and you'll see that nearly every jump is much harder than it looks.

I have to thank Kiyura for introducing me to the game and for racing it several times with me in the #speedrunslive channel. We shared a lot of strategies for timing various jumps and other small optimizations. We decided to try to get the best time we could within a week and a half and whoever was the winner would submit. The result of that was a 5:26 which I submitted, but it was rejected during submission because ExplodingCabbage, one of the verifiers, found some great tricks.

The first is in the trampoline room near the end. Normally it takes 15 bounces in order to reach the clouds, but he discovered that if you hug the left pole as you jump onto the trampoline, it only takes 12, which saves a few seconds. I had encountered this glitch randomly before in a practice run, but wrote it off as a random occurrence. The second, and bigger, trick he found was a way to skip taking the sewers when coming back from Shill Forest. If you line up the jumps just right on the fruits, you can grab the lantern and jump over the gap, which saves more than 20 seconds. It's a precise jump, so you'll see that I pause before doing it to make sure that I'm lined up correctly.

I believe that I made all of the jumps without losing time, although I did accidentally jump onto a fruit somewhere near the beginning. I've played this game way more than I expected to when I first began running it, but there have been tons of strategy changes and little optimizations for nearly every room, so I think the work put into it shows.

I hope you enjoy the run and will try the game (everyone seems to take away a different interpretation of the story and ending). Many thanks to Kiyura and ExplodingCabbage for finding a lot of tricks I wouldn't have and motivating me to resubmit. An equal amount of thanks to the newly reconfigured staff of SDA (flip, vorpal, and moooh), congratulations on the positions and hopefully it's a positive experience for all you guys. Lots of thanks to Mike and nate for all of the work they've done over the years, and I hope Mike enjoys his retirement.