Released in February 1988, Contra was one of the first of dozens of one-hit death run 'n gun shooters. Like all run 'n gun shooters there's a plot concerning a great evil (in this case the alien Red Falcon), but in the end everyone knows the purpose of the game is to shoot everything that moves while looking buff and manly. 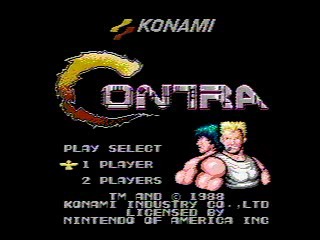 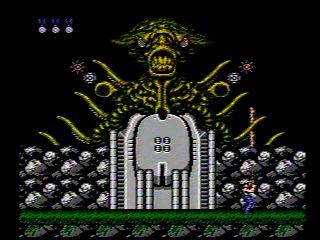 Note: Picking up no items is the equivalent of low% in Contra.

Runs on the Xbox 360 NTSC-US version:

I adjusted the settings to use the Original graphics and music. As far as I can tell this has no affect on the speed of game. I also tested this and my times appeared to stay consistent between settings.

Nothing out of the ordinary here. Quick and clean.

Again, not much of note here. Cores go down quickly and then it is on to the boss.

This started out as usual, with the two left panels going down fast, but that was all that went to plan during the first phase. The shot I fired when I jumped did not fire diagonally and up, but directly to the right. Fortunately it hit the lower right panel. From there I just improvised the rest of the first phase.

The second phase went as usual and despite that improvised start I actually gained a small amount of time on this fight!

The jumping in this game is...special. Boxfat referred to them as "Dolphin Flips" in my stream chat one day and it stuck. How appropriate that you see the jumping the most in this stage.

There is a rather tight jump in this stage (see if you can spot it!). I also have to make some fine adjustments for a couple of jumps, which is not at all easy with a 360 controller joypad.

The gun turrets on the defense system go down fast and I got really good luck on the gun panel opening right away. How fast the panel opens is completely random. It can open fast like it did for me, or take a really long time; long enough for a soldier to come wandering on the screen from the left before the core goes down. If we do not see that soldier at all; that "bringer of bad news", it is a good fight. If we do, we shoot the messenger and reset.

Fortunately we did not see the messenger and I am sure he was relieved to not have to get shot.

Not much to note until the last room. In this last room there is a box blocking the core. It is possible to shoot over the box and kill the core, instead of having to burn a few shots on the box before being able to hit the core, thus saving some time. During my first runs I could neither pull this off nor had the confidence that I could, so I was not going to even try. Then Boxfat and I had a bit of a lighthearted chat about "saving the boxes" and being a good sport about it I decided to take on the challenge. So I worked on it and it became second nature and so the box, although it gets destroyed in the end anyway, is not destroyed directly by me.

2-cycle is all you need to know here.

The aiming in this game is pretty special, too. Add the 360 joypad and it makes it worse. Add in more enemy congestion and things can go awry fast. I had to fire an extra laser shot at the first shield gunner and let fire a stray shot, but fortunately that is all that went wrong there and it did not cost much time.

Discus Guy #1 gave me a good pattern. He is usually fairly consistent from run to run.

Discus Guy #2 also gave me a good pattern, but as those who have watched the runs I have streamed know, he is a massive troll. I took no chances and did a safety jump.

You are set up perfectly to just keep running through the spiked balls in the next section and I take advantage of the shield gunner non-hitbox again.

Missed a shot on the shield gunner at the end, but recovered quickly.

Luck was really good to me on the midboss this time. The enemies the midboss spawns can show up in such a way that it is impossible to kill them before they kill you or that they can eat up a lot of time while you kill them before you attack the midboss. I got probably the best luck I have ever had here and was able to killed them really quickly.

You see me fire off some laser shots that do not hit anything. The purpose of this is to make sure my aim is staying where it should and to make sure I properly time the two shots I need to kill the lower mouths. The rest of the mouths and their projectiles are of no concern.

A few properly placed laser shots take care of the "spiders" and the rest of the shots break the heart quickly.

The Wait Until the Credits:

So...uhh...you can walk around while the victory music plays and up until the screen has faded out completely and switched to the credits. This takes fifteen seconds no matter what.

This is a very short run, but it is much harder than it looks. There is so much execution squeezed into a short time. There is also the factor of bad RNG in critical areas being able to just outright kill a really well executed run over and over again in the same place. That I only made several minor mistakes and got pretty much the best RNG possible is quite fortunate.

First and foremost to Mr. K. I would not have at all picked this up seriously if not for him and he provided a lot of key advice and encouragement. I also finally took his advice about letting this run be! Also a great big thanks to Mr. K for doing audio commentary with me.

Boxfat who also provided encouragement, was around for many of my run attempt streams and that 4:53 I got the day before this run, came up with "Dolphin Flips" as a descriptive phrase for the jumping, and encouraging me to "save the boxes!"

Hurblat, PJ, sinister1, DK28, zallard1, Deuceler, Murphagator, and anyone else I might be forgetting who showed interest in my progress and/or offered encouraging words. You all rock!

And lastly to the boxes who gave their lives before and while I was learning how to be consistent enough to shoot over the one in the last room of Base 2. I am happy to report that I did not hurt a single box in this run (directly anyway).