This game is... bad. It suffers from constant slowdowns and flicker. Somehow though it got a localised North American release, despite it being made for Japan to start with (it got cancelled there too!). Anyway this game oversees four heroes as they attempt to save Neocity from the terrorist organisation D.N.M.E. 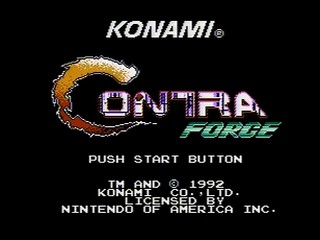 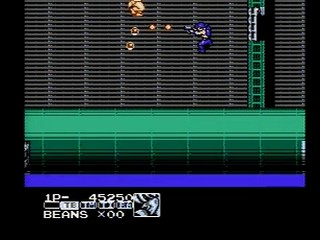 This run started as a joke. I took most of the week off during the first Contra Conference, but I had to go into work on one particular day. On that day, Heid and Blat defied my orders and started playing and routing this game.

Weapon upgrades - You get this by picking up the flashing box. It moves that white rectangle over a slot and pressing select activates whatever thing is selected in the bottom left. Burns for example has a machine gun listed as MG. Only the TI which stands for triple shots (that increases the shot limit of the current weapn from 2 to 3) and the flamethrower are used in this run.

Pausing - It takes 4 seconds every time, it's terrible

Infinite Jumping - Jump, pause the game, hold jump and unpause to do another jump. You can gain height forever, but

Ceiling clipping - not used in the run, but it basically involves using the second player to trick the game into doing a vertical screenwrap letting you clip through the ceiling. It's incredibly precise and gameover if you mess up.

Lag Management - 90& of the route for this run. Basically kill everything that moves as quickly as possible, even if you have to die on purpose. Despite frame by frame lag optimization, a quarter of the frames of the TAS are lag frames. That should give you an idea of what we're up against here.

Screen position manipulation - The game normally scrolls when you are at the center of the screen and scrolls with your movement. The screen does not scroll during the invincibility frames you get after dying. This allows you to get to the very front of the screen and helps you reduce lag.

I use Beans to start out. I need to get to the far right of the screen as soon as I can to kill enemies immediately to reduce lag. I die on the forklift to accomplish this. Once I'm at the far right I can basically kill everything immediately to reduce lag. This also includes the crushers on the conveyor belt. A bit later on there are some barrels on the crates. You can despawn them if you destroy the crate they are supposed to fall from if you don't scroll the screen too far. I grab a triple shot on the way to the boss.

If you stand point blank with the boss he will just keep jumping backwards for some reason? I have no idea. I use it to kill him quickly.

I take a dive here to get to the edge of the screen again. This lets me progress through the stage whil spawning very very few enemies. Also you can run through most of the jet exhaust? Pay close attention to how I enter what looks like the cargo hold of the ship. You can sneak past the gigantic soldiers inside the ship, but the positioning is precise and collision detection with the crate is intermittent.

Standing in a specific spot with the boss causes him to fire through you and not charge you. The positioning is precise so it's tricky. It's also hard because sometimes you clip through the crate he's hiding behind at the start of the fight.

The elevators in this stage are SOOOOO SLOW that even though it's 4 seconds per pause, the jump glitch trick is the fastest way to ascend. Getting up to the platform with the catapult is a little precise. Also the pause jump bridges the property of being catapulted which ends up being a huge shortcut for this stage. It's also an opportunity to switch in Iron without eating an extra pause. Iron struggles to navigate this stage. I need to get flamethrower beofre the boss which I do.

The boss is quite difficult and has a ton of health. You have to take out the center gun and all the thrusters. The thrusters can't be damaged while thrusting. You can manipulate the gun in the center to not hit you with proper positioning and I pretty much use flamethrower to take out everything. Taking it out with peashooter in a similar amount of time requires mashing at 30 hz with perfect precision. In other words it's nigh impossible in real time.

I hate this stage. I hate this stage. Did I mention I hate this stage?
So this stage is the biggest and longest in the game. There are no shortcuts through it. I need to switch out Iron. I decide to let him take the death and use the I frames to get Beans in front. You basically have to memorize where everything spawns and take it out immediately. The lag is just...it's inconsistent. The section where the tank is is byfar the most difficult as enemies respond and one of the enemies has a flamethrower who needs to be taken out immediately. Boarding planes is...yeah. The turrets have the craziest hitboxes and angles.

The boss is luckily a pushover. With proper positioning, you can take out the boss by hitting some area...below his feet?

Stage 5
Burns/Beans can run past the final boss without him catching up at the beginning of the stage. It's pretty straightforward up until the big steps. That jump is so scary.

The final boss can't hit you with his gun if you're close enough to him. While the fight does take precise positioning it's consistent.

That's the game. I could go into more detail, but...yeah. Thanks for watching!