Released in September 1994, Contra: Hard Corps received mixed reactions from fans. Some liked being able to choose characters with different abilities, and choosing paths that affect the ending. Others thought the game was too hard and the cutscenes distracted from what was really important, the action. There is a story about a colonel who turns traitor against his country and steals an alien cell to exact revenge, but most people are too busy staring at the hundreds of explosions to notice. 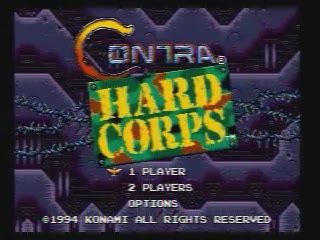 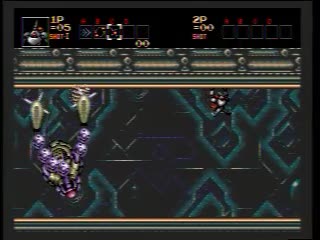 Q: Why did you pick Browny? His weapons suck.

A: All of them except for weapon C (the yoyo), which is unbelievably broken. Don't believe me? Look at how quickly the first boss dies.

Q: What happened to the first boss? He didn't even go into his second form.

A: If the first form is destroyed before it lands from its second jump, then you skip the second form entirely. Don't ask me why this works, it just does.

Q: Why is your yoyo method inconsistent? Sometimes you spam it at point blank range, and at other times you let it linger inside the bosses.

A: If I can get up close to a boss without dying, then I spam the yoyo at point blank range. However, not all bosses let me inside point blank range, therefore I sometimes have to shoot my yoyo from a distance and let it linger.

Q: Why are there some funny pauses when you text skip?

A: Speeding through text and skipping text are mapped onto the same button, B.

Q: Why do some bosses take tons of hits before dying, then suddenly die when you didn't even touch them.

A: Some bosses (the doctor in this path, the three-part boss in the lab, fight path) have attacks that can't be interrupted. Even if you kill the boss two times over, the boss won't die until it finishes its attack.

Q: Why do you do some very stupid things that almost get you kiilled while fighting the jungle boss?

A: I was very, very bored. You try fighting a boss where you spend 90% of the time waiting for it to become vulnerable, and only 10% actually hitting it.

Q: Why do the runs vary a bit in quality?

A: I discovered a couple of new strategies while running the game, and I was too lazy to redo the earlier runs. I don't think these new strategies shave off more than a few seconds.

After I finished Metal Slug 3, I wanted to run a game that was easy and short. I decided to run Contra: Hard Corps because it's a short and easy game that people think is hard for some reason. It also makes me look a lot less lazy than I really am doing 5 runs on one game =P

This path is the shortest path, with the exception of the secret ending path. You might notice I do a couple of things differently than the TAS, mostly because I can't hit a button 30 times per second. Though I will admit I could have copied the TAS in a couple of places and shaved off a few seconds.

The only thing I think that really needs explaining is the doctor fight. Once the doctor chooses an attack, he can't go into his next phase (the legs growing) until he is finished attacking. That is why it looks like I have killed him two times over, but he is still alive. No, my luck against the doctor wasn't optimal, but it wasn't terrible either (the pole attack takes longer).

Overall I think this run went really well. There were only a couple of mistakes in the end of the run, and a little bit of bad luck against the constellations. I think the best time someone could get on this path is around 16:15, if someone was devoted enough to try for optimal luck throughout the whole run.

The most annoying thing about this run is the headless chickens in the last stage. If I try to slide across the stage, a chicken usually runs into me. Not many problems with this run, my fight against the heart could have been a second or two faster with more jumping and rapid spamming of the yoyo, but my good luck against the crawler boss more than made up for it.

I know these comments are very short, but there really isn't much more to say. If you have any other (as in not covered by my comments) questions, just ask me on the forum.

A couple of quick comments on the run:

I used weapon A against the jetpack guy's first form because he moves around too much to hit with the yoyo.

Yes, I should have slid to the right before I started fighting the dual wheel miniboss in the jungle.

Don't ask me why the yoyo's auto-aim doesn't work very well against the robots in the train stage. It just doesn't.

Yes, I was disoriented for about a second when I collected weapon D in the final stage (though I always collect it)

My doctor battle was really piss poor. I think this was the first time I couldn't kill him before he created a second set of webbing.

Using my third bomb on the second form of the final boss prevents the boss from jumping over to the left and using an attack that wastes at least 15 seconds.

Secret ending path as Browny in 0:05:30 by David Heidman Jr.