Released in October 2002, Contra: Shattered Soldier was released after two subpar (to say the least) Contra games developed by Appaloosa. Konami's internal development took over the reins and made a successful throwback to the old-school Contra days of fast action and unlimited ammo. This Contra features veteran Bill Rizer and a new cyborg character, Lucia, in a mission to destroy Blood Falcon. 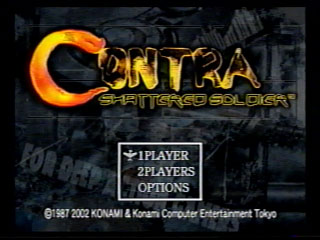 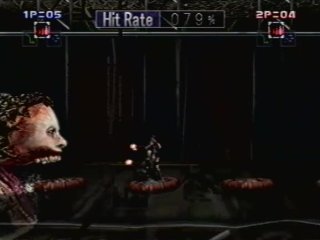 My first non-Mega Man X speed run! Hopefully you will like it. I know there are two other Contra: Shattered Soldier S-rank videos out there, but neither of them aimed for speed. The main reason why both runs (Psyrell's and Rouven's) are slower is because both players failed to abuse the flamethrower, which is by far the best weapon in the game. The charged up flame thrower shot not only has a lot of power, it also travels through the screen quickly, and it goes through solid objects (see my battle with the robot in stage 4). I know there is one area I use the flamethrower when it isn't the best weapon to use, and there might be a place or two where I underuse it.

For those of you who don't know the game very well, Contra: Shattered Soldier is mostly boss battles, meaning your time mostly depends on how fast you can kill bosses. Also to get an S-rank it is necessary to destroy every destructible non-respawning object (100% hit rate) in the game without dying. If there is a section that looks uneccessarily slow, obtaining an 100% hit rate is usually the reason why.

Although Psyrell's and Rouven's Contra runs were not fast, they both had some interesting tricks I used in my own run.

Rouven: Use of homing missles in the section right before the boss in stage 4, flamethrower positioning in the beginning of stage 6, and using the mine gun in the last area of stage 6

Psyrell: Using the flamethrower when Mr. Heli-Robo shoots the laser beam (in robot form), positioning when firing the the machine gun at the stage 4 robot mini-boss, and using non-charged flamethrower against the plant boss in stage 5.

Overall I'm satisfied with this run, I make a few mistakes here and there, but nothing incredibly costly to my time.

First of all, i would like to mention despite the game appearing to have 3 weapons, there are only two(plus charged versions of course). FULL STOP. :)

I now state all the mistakes/stuffups and you can assume everything else is perfect. :)