Released in February 1993, Cool World is a platforming game loosely based on the movie of the same name. The player guides Jack Deebs the cartoonist on a quest to return to the real world from the fantasy world he finds himself in... 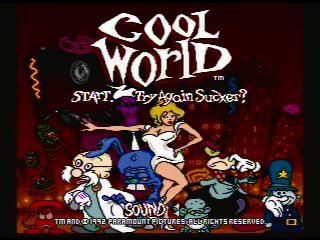 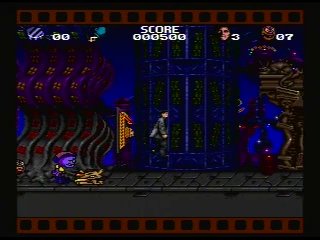 So what made me run this terrible game you might ask? Well, to be quite honest, I don't really know! I played this game during Mechathon (a marathon I did to help raise money to get myself to AGDQ). No one donated for this game. It was all just a random decision of mine.

It's weird, because I remember playing this game only once and thought it wouldn't be that bad of a game because the music is actually decent. Not until I tried to beat the game that I realized what I was getting myself into. I wasn't even planning on finishing it, but someone found a guide somewhere online and something just made me want to finish the game. Again, I don't know why...

So I beat the game, ended my marathon (what a great way to end my marathon, I know), and thought to myself "you know what? I wonder how long it would take to speed run the game". Once again, I don't know why I thought this. I was originally going to offer this game to the poverty exchange, but decided I would just run the game myself. Miraculously, I completed a speed run of this game in only one day. I beat the game in one day and speed ran it the next. I think someone was looking out for me to make me suffer through this game for only one day. Now, onto the run itself...

If you actually completed this game, the rest of this is for you. Otherwise, if you're still curious as to what's going on, I'll still try to explain it to the best of my ability. But honestly, I never understood this game either. And just for the record, I have never seen the movie and probably never will thanks to this game.

The beginning is pretty straight-forward. I grab the fist then grapple (?) to the roof of the shop (yes, that's a shop). I hit the rabbit twice so I can become invincible. Those biffs that come off of enemies...every other one gives me temporary invincibility. After this, I grab the keys. The keys are a pain in the ass to grab because your grabbing animation is slow and just plain garbage.

The first neat trick I do is instead of taking out the big guy to activate the switch behind him, I found out you can still flip the switch with him there if you're invincible. After that, I grab 7 coins, which in this run, is the only time I ever managed to grab 7 coins in that jump. Any other time, I would get 5 or 6.

Making my way to the bar, this is where the run starts to get annoying (not that it hasn't after powering up the game). The trick in this area is to get a soda for Holli so she'll go out with you. You have to order one from the bar tender that you can only talk to when he's not moving (this is random). On top of that, if anything hits you, you drop the soda. I also had a couple cases where the soda fell from my hands for no reason at all. Once I give the soda to Holli, I kill myself on purpose because I warp back to the beginning of the bar, and this is faster than walking all the way back.

The car area went really smooth. It's hard to mess up this part.

Candy Land. This area was a trip to see when I made it here the first time. Anyway, you're supposed to have 10 candies to be able to get into the malt shop, but it's possible to enter with only 9, which is probably just a simple programming error. In the shop, I use the wall to bounce me over the gap. When you touch that wall, it sends you moving back.

Car area 2 went perfectly. This area is where almost all of my runs were ruined because I hit too many objects. It's possibe to skip the last red light if you jump high enough over it, as seen in this run.

The tall building went well. I got knocked down a couple times, but it went much better than it usually does.

Fast forward back to the malt shop. I couldn't take out the woman by the spike (for some reason, they are invincible). The death wasn't intentional, but it worked out since it wapred me back to the entrance.

After I leave the malt shop, I have to sit around and wait because the game has a hidden timer after you get the pen that sends you back to real world when the time is up.

Fast forward to the hotel. When I get on the spider (I don't care about this game enough to know what his name is), you can just go all the way to the left and be completely safe.

The big purple body guard, you take the blocks out from underneith him and he'll fall. If you stand still, he'll burp on you (which he does to me once). That's why I have to inch forward after every punch.

The last guy wasn't a perfect fight, but it went well enough.

Holli "fight" went way better than expected. Basically, you have to suck up those drawings with your pen. That's what I'm using when the character is bending over. It's really hard to time it because the ability is so slow and its range is garbage. It's possible to pick up more than one drawing at a time and that's how I was able to take out Holli so quickly.

So there you have it! If you managed to sit down and watch the entire run, I applaud you and would like to apologize. But thanks for taking the time to check out my run! I'm proud of how well it turned out, and only a day of running it! It's not a tough game so if you like really bad games, this one is worth checking out!

Thanks to everyone who verified, Flip for handling the run info, etc., and nate for encoding!