Released in 2003, Crash Nitro Kart is about several Crash Bandicoot characters who are abducted by an evil emperor with a fetish for racing. Needless to say if they refuse his challenge to race, Earth will be destroyed. Players need to free other characters and complete way too many races and challenges before the emperor and his subjects are satisfied. If the players are hungry for more action-packed racing, the game features even more racing modes for two to four players. 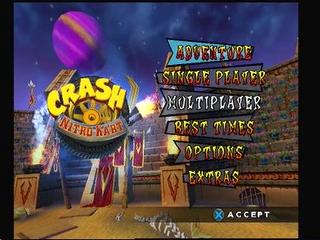 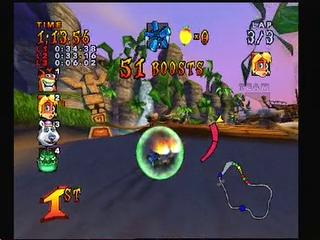 First of all, there is one thing in this game, you have to be aware of: If you try to go as fast as possible, the power-sliding is obviously used. But in order to gain maximum speed you shall actually boost when the meter is full. Not almost full, but it really has to be FULL. If you keep that in mind, you should be going as fast as possible. Technically it would make more sense playing as Crunch/Tiny, as you can swap drivers at wish, but since Crash/Cortex has better turning I prefer him, plus I once tried doing this run with Cunch/Tiny and it was even worse, but then again I failed slightly more. I am using the PS2 PAL version of the game. I am totally not aware if there are any differences in terms of loading times between versions, and about the speed itself I'd say NTSC is faster but that is just a random guess. Either way, this is a single segmented Any% speedrun.
I do not use the Team Frenzy feature, as I cannot handle it to keep track of the boosting at the same time while spamming power-ups. If you want to get around sharp corners without losing speed, while your drifting wouldn't be enough to get around it, just jump and brake. You will lose the boost count, but not the speed, which makes it possible to retain in well speed.
My time in this speedrun is not perfect, but it really is good and if you do this run perfectly (as of not screwing up shortcuts and not getting hit by bad stuff) you should be able to slightly sub 1:10:00.
Anyway, I will go more into detail now, how well I did in the single levels.

~TERRA~
#01 Inferno Island: I did quite well. Some random slowdowns and hitting the wall didn't affect the end time too much.
#02 Jungle Boogie: I had a bit of a poor start but it went down to a decent time.
#03 Tiny Temple: Besides from some minor mistakes it is okay.
#B1 Krunk: Besides failing the shortcut at the beginning of the track twice, I did relatively well, but still worse than the Trophy Race.

~BARIN~
#04 Meteor Gorge: Let's just say it was perfect.
#05 Barin Ruins: A good performance, the biggest mistake was probably me getting hit by that orb in mid-3rd-lap.
#06 Deep Sea Driving: Close to perfection.
#B2 Nash: As this is Deep Sea Driving again, I got even close to perfection. If I didn't got hit near the end of the third lap I would have probably gotten my boost up over 150.

~FENOMENA~
#07 Out Of Time: I did relatively worse on this one. Though I did not fail any shortcuts I took, I didn't use on at all, as it is really glitchy and it is a bit risky to take it, though it does save 4-5 seconds. Also there were many parts I just stopped drift-boosting so an improvement is not unlikely.
#08 Clockwork Wumpa: Besides some minor mistakes I did this one quite well.
#09 Thunder Struck: If you think of it, this is my least favorite level and knowing this, I did extremely good.
#B3 Norm: As I had a bad start by screwing up the first shortcut, I made up for it by using the glitchy shortcut later on. But the rest was worse than the overall view of this speedrun.

~TEKNEE~
#10 Assembly Lane: The start wasn't the best, but the last two laps were almost glorious. Well, almost.
#11 Android Alley: Acceptable.
#12 Electron Avenue: There is one glitchy shortcut that saves a good amount of time. Unfortunately I failed it once, though this race was still bloody good.
#B4 Geary: Wonderful in a way.

~VELO~
This is usually a difficult race, though I managed to finish it off even with some mistakes.

All in all it is possible to say I did an overall good performance, though if some mistakes did not happen I could have gotten under 70 minutes. But then again, in a single segmented speedrun that takes over one hour, it can be difficult to not screw up and with such a time I am happy.