It's a proven fact that if you want to be a video game mascot you have to be featured in more than one genre. Crash Bandicoot was intended for the mascot role at one point, so the 1999 release of Crash Team Racing was practically inevitable. In typical franchise kart racer fashion, Crash and other characters take to an assortment of tracks and powerslide their way to the gold. 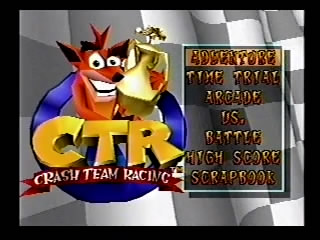 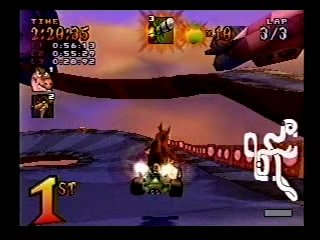 I used Dingodile, because he and Tiny are the fastest characters. And I also made sure to skip as much of Uka Uka's talking as possible.

Here's a little rundown of the levels:

Crash Cove- Decent race, could have better. Lost speed at the beginning of the 3rd lap.

Roo's Tubes- Could have had some tighter turns. Did well going under the mushroom.

Mystery Caves- First real mess up of the run; losing control at the very end.

Sewer Speedway- I used the big shortcut and the slanted wall glitch, but got stopped by the wall on the 3rd lap.

Ripper Roo- In the 1st lap, I missed the turbo. Everything else was fine.

Tiger Temple- Had good luck getting the right items to open the shortcut. Had some trouble boosting in the narrow hallway at the end of the 3rd lap.

Coco Park- Everything was fine.

Papu's Pyramid- Messed up the shortcut on the 2nd lap but went for it on the 'replacement' turbo.

Papu Papu- Had a little trouble getting around Papu in the beginning. All 3 shortcuts were good.

Blizzard Bluff- Got hit by the boulder in the 2nd lap. The 3 lake jumps were good.

Dragon Mines- Got hit by the mine cart in the 2nd lap.

Polar Pass- The start to the 2nd lap was sloppy.

Komodo Joe- Took a dumb fall on the 1st lap.

Cortex Castle- Ran into a few walls during the 2nd lap. Great otherwise.

Hot Air Skyway- I got very lucky in the 1st lap when I missed the shortcut but Uka still picked me up and put me on the other side of the track.

N. Oxide- Got hit with a nitro on the 1st lap. The 2nd lap was amazing. Great race overall.

Q : Why Coco ? She is not the fastest for speedrunning ! Tiny and Dingodile are faster than hem
A : Yeah, that's true, Tiny and Dingodile are the fastest character.
Because they are both second fastest character, but they turn a little better than Tiny/Dingodile, so she can do a lot more shortcuts (I think especially about Papu's Pyramid, Hot Air Skyway, Oxide Station and also Tiny Arena)

Q : Why is there no text on the game ?
A : It's because of the "Japanese language glitch", You enable it by press Triangle in the language menu. It have 2 effects on the run :
1. : Normally, after being back on the map. You're supposed to wait a few seconds before Aku appears/You can have the control of your character. The glitch removes it (PAL only)
2. : It skips a cutscene (The one before racing Komodoe)
And before you ask, no, this is not what reduce loading times. It is just because I enabled the PS2 Fast disk speed.

Q : Is this WR ?
A : Errr, 14 seconds behind, close enough. Blame Hot Air Skyway and Oxide Station
(At the time this commentary was provided)

Q : How does your boosting last for so long ? Are you cheating ?
A : This is a basic mechanic for the speedrun. When you are boosting, you are filling an invisible boost stock which keep your boost on as long as it doesn't reach 0.
You can fill it more or less depending on how much you fill the boost bar. (At the bottom right corner)
To give you an idea in terms of number :
The boost stock is a number beetween 0 and 32767 (It can overflows)
It decrease by around 1000 each second.
A boost can give beetween 0 and 2000 depending how much you fill the boost bar.
A boost pad give +38 every frame you are on it (to prevent it from decrease) and gives an extra 960
A boost pad type 2 (See below) give +38 every frame you are on it and an extra 160

Q : What is the insane speed up you get by sliding on this wall on Sewer Speedway (4th track)
A : It's called Speed Ghost. It happens for reasons. I dunno why. You get it by just being on the wall. No joke, you can try it

Q : How do you get this huge boost on N.Gin Labs / Cortex Castle and how do you keep it for so long ?
A : This is a special boost called "Ultimate Sacred Fire" which you can only get from a boost pad type 2 on some tracks. (Not even every pad are type 2 on those track though.)
I'm not sure about the technical details, but here is what I know :
This speed is glitched and has been coded like that intentionally. So when you have this speed, you are not allowed to do any form of boosting. Only simple jumps and drift are allowed. Otherwise, you lose the Ultimate Sacred Fire.
So to make it last as long as possible, you have to fill the boost stock as much as you can before getting it. (See above)

Q : What's with the hop on some tracks ?
A : When getting a speed above the usual maximum (When you pass on a normal boost pad) by getting a downhill, speed ghosts, USF, etc... .
You can keep those a little longer by "froggying" (Yup, that's actually how it's called. Don't blame me, I'm not the one who come up with the name :P)

Q : No comment track by track ?
A : I haven't got anything particular to say. Everything in general has been said above.
If you're more curious about technical details. You can always search for guides on the Internet ;)