Released in November 2007, Crysis is Crytek's another graphical monster designed to stress out every part of the player's PC (the first 'killer' being Far Cry). Despite a certain obsession with insane graphics, the designers managed to put some really well designed gameplay into the mix. Our hero, Jake 'Nomad' Dunn, possesses a suit of nano-armor that lets him become inhumanly fast, strong or resilient, and even disappear into thin air; and he must use his technology fueled powers to wreak havoc against North Korean cannon fodder and some extraterrestrials for good measure. 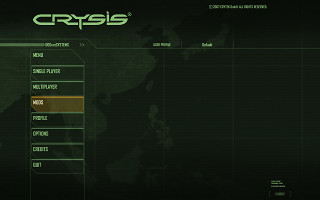 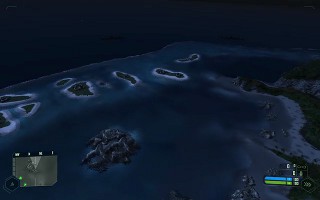 This is my first speedrun and is a project that I have restarted twice due to constant discovery of new things, particularly the circle jump as well as its different uses and tactics. Credit goes out to LagMasterSam for getting the ball moving with his original videos. Thanks to Mike for support, nate for anri-chan and rest of SDA staff for publishing the run.

Autosaves
Easily one of the top causes for death in this run. Basically every time you complete you complete an objective or pass through one of many checkpoints the game pauses for about 1-2 seconds to save which is quite longer than most games. This isn't a big deal when you're casually playing the game, but when you're completing objectives at the speed that I do they become lethal as they tend to screw up your circle jump, and get you killed by helicopters and random Koreans.

FPS
The game in general is extremely resource intensive, which is amplified through the use of fraps (and to a lesser extent, autosaves). Even with complete minimum graphics it was impossible for the circle jumping segments to appear smooth due to the speed that I am traveling (close to 3x normal speed). Hence I attempted to find a balance of decent visuals for relatively small fps hit.

Saving/Loading
Crysis has a ton radio comms with lengthy dialogue; problem is that if you save during the dialogue, upon loading it begins to repeat from the start and really brings down the quality of the viewing experience when putting the segments together. I could have disabled dialogue all together, but that would also mute suit effects and enemy sounds, therefore I've only muted sounds sparingly throughout the run, and planned my segments to start and end between dialogues.

Tricks/Glitches
The majority of glitches/tricks and level specific tactics that I've used in this run I discovered personally, with the exception of the first two.

Fast swimming
Look up while holding down w + d or a, while pressing space. Credit to LMS.

Rocket Launcher
For a faster RL switch press 'melee' while taking it out.
By switching to a different weapon after firing, you can move on to do other things while the rocket travels to its target.

Cloaking
More of a tactic, when you cloak air vehicles like helicopter tend to stall in the air, making them significantly easier to hit.

Save glitch
This one is on a case to case basis. Basically if you do certain things in the game, ie open a door through a specific scripted event, when you load back to a state before you opened it, there is a possibility that it has been kept opened even though you have yet to do anything. Finding where the save glitch can be used is simply a process of trial and error.

Punching in speed mode
I use this to get rid of excess energy.

There are a lot of different ways to begin a circle jump, for simplicity I will describe the specific steps to perform the jump while stationary:
1. Enter speed mode and sprint so that you energy is below 20 (red zone)
2. Stop moving, keep holding down sprint, remain in speed mode.
3. Wait for energy to begin recharging and allow it to go above 20 (blue zone)
4. While holding down sprint (DON'T MOVE YET!), simultaneously do the following: jump + press and hold W + A/D while moving your mouse to the corresponding direction that you are strafing. For instance, I personally hold W + A and begin to look to the left. You want to then create a semicircle-like movement while doing this jump.
5. After some distance, strafe and look to the opposite side.
6. Repeat 5 in a certain interval in order to gain altitude and fly.

Second, you need to find a suitable surface and ample space to successfully perform the jump. In order to gain height, the surface needs to be a slope of varying degrees. The type of slope will ultimately determine the type of jump you will do. Furthermore, different slopes have different levels of jump difficulty. For instance the Paradise Lost jump I can perform close to 100% of the time, whereas the second Recovery jump I succeed around 15% of the time.

The process of flying and maintaining altitude including ascending/descending is indescribable and can only be done with sufficient experience.

Some facts about flying:
-Throughout the entire process there is a risk of imminent free fall, where you lose the control of your character and fall to your death. There are techniques to prevent this, one of which is doing a 360 turn, however they all take up extra time. The objective is therefore to minimize their use, and fly directly towards the desired destination.
-You cannot save & load while flying, doing so will result in immediate free fall and the loss of control.
-Autosaves constantly mess up your timing leading to free fall and death.
-If you touch the ground, the jump fails.
-If you collide with an object, the jump often fails. It is possible to recover if you are high enough off the ground.

Contact
Fast swimming to the shore allows you sequence break and get your energy back faster.

Recovery
At the beginning I perform pretty much a flawless circle jump, I lose a second from a random Korean blocking the RL. During the second jump, the reason I fly through the jungle rather than go straight to the cave is because there is a trigger I have to hit in order for the cave entrance to open. I die at the end of the level to an incredibly unlucky landing (I am like 1 hp short), I use an autosave from a moment before to complete the level costing me 1-2 seconds. In addition, I never planned to fly inside the cave in the first place, it is definitely possible but requires amazing luck and I've never personally ever been able to do it. If one were to manage it and not die from fall damage before hitting the end level trigger, you could save 2-4 seconds.

Relic
After the first landing near the dome I get shot at and lose energy, and can be improved by a few seconds with better luck. After the cut-scene, I do a combo of strength mode jump instantaneously followed by speed mode to get out of the trench. The second circle jump was done close to perfect. The nano suit soldiers spawn in 2 groups in random parts of the forest, and with luck manipulation I get the ideal spawn combination.

Assault
The first segment of this level was easily the hardest in the run as stalling in the air while aiming often results in entering free fall mode. I survive the fall to the ground by exploiting the game's physics. The boat jammer can be destroyed rather than deactivated in order to complete the objective, and the hitbox extends to the outside of the ship which can be hit with a precise rocket shot. I had an unlucky autosave while looking at the gunner and was fortunate that he didn't kill me.

Onslaught
Autosave galore, the hardest part is staying in the air with the constant pauses. I actually fail the jump at the very end but it didn't matter as I was already over the final trigger.

Awakening
I tap forward in the beginning to get rid of energy faster. The cinematic in the cavern can be triggered from the air by flying over it.

Core
After you enter the alien ship you can't progress further until anti-gravity kicks in, as such I don't make a lot of effort to optimize my jumps in the beginning. The door at the end of the level is prematurely opened using a save glitch, completely skipping the long fight sequence.

Paradise lost
I perform a different circle jump where I don't gain any height and instead I slowly descend down the mountain, since I want to minimize my free fall distance at the end. I complete the objective before I die, allowing me to go to the next level.

Exodus
This whole level is heavily scripted, and I make no attempts to optimize certain parts as they can't be sped up. The first AA gun sequence was close to perfect, and the second could be better by a few seconds (unfortunately my save file got corrupted and I didn't get a chance to optimize it further). The problem is that the AA rockets are incredibly hard to hit with as they do not auto lock, in fact I think I should have used multiple segments per AA gun sequence as it requires luck manipulation just to hit certain alien targets.

Reckoning
This is another heavily scripted level. I skip the whole reactor sequence via a shortcut. During the final boss fight I encountered the infamous TAC bug (a save-specific bug where by loading using a particular saved game you are unable to lock with the gun), and had to load to an earlier auto save resulting in an additional segment. I use a save glitch disable cannons' immunity and destroy them before they are activated. In an attempt to make a dramatic finale, it looks like I do not get to the VTOL fast enough, however I get in position just moments before you are able to trigger the cinematic, not losing any time.

Hope you enjoyed the run!