Released by Namco in 1993, Cyber Sled is based in the year 2067 where the world is falling apart and in order to escape the problems, a new sport based on tank combat is started. Every contestant puts their life on the line in order to become the best fighter in the world and win the ultimate prize. Totally makes sense. The game features 8 characters, 8 battlezones and several powerups to help you destroy your opponent swiftly. 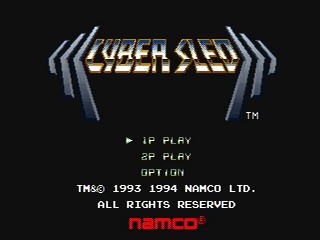 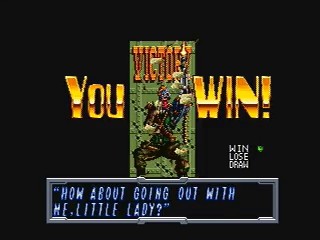 I loved this game in arcades as a kid and recently found out there was a ps1 port. So of course, my first instinct was to buy it and start recording stuff. The ps1 version is a HUGE drop in difficulty from the arcade version (although arcade difficulty is selectable on it), which leads to a pretty hilarious change in strategies. I initially was using Amanda because of her balance of attack power and speed, but in the end I went with Rexer because he fires missiles about twice as fast as other characters and has a huge stock of them. The flip side is that he's pretty slow, and can't take damage worth anything, so if I don't win immediately, I pretty much am done instantly.

During fights, the most important things are leading shots properly so that missiles land on target, and avoiding hitting opponents' missiles with your own since they will collide. Also the CPU has infinite missiles, which makes a couple fights really stupid.
The fights in this game take place in a set order regardless of who you pick, but your individual character is removed. This affects the fights slightly since the stages are also on a rotation, meaning different characters do certain fights on different stages.

Amanda is fast and has almost no health. She went down in 4 seconds on this particular run, but if I get perfect luck with her movement it's possible to get a 3.

Roger is intended to be a slightly better balanced Rexer, with a lot of attack at the cost of speed and average armor. His AI seems to generally sit around and not do much of anything. I got a 5 here and a 4 is my best, again due to minor AI movements.

Victor has a ton of health, but really nothing else of note. I tied my best time on him here with a 5.

Alan is fast as hell, but makes up for it by having no health and little attack power. This was the worst fight in the run since I didn't catch him right away, this fight was a 9 and my best is a 5.

Sylphy is an oddball. She has a boatload of health, I think the most of the selectable cast, but accelerates extremely slowly. She accelerates so slowly that the CPU doesn't understand how to move out of the starting block a vast majority of the time. I got a 7 here, best is a 6.

Hans is tough as nails and has close to as much attack power as Rexer, but makes up for it by being the slowest member of the cast. I missed a few shots here and ended up with a 6 second time when my best is a 4.

Heintz is about as fast as Alan, and I think even accelerates faster than him. He also does a surprisingly large amount of damage, which is supposed to be balanced by him only stocking 2 missiles, but the computer cheats. This particular fight tied my PB with a 4 second fight, which is important since if Heintz decides to run away he can easily eat up 10+ seconds.

Marie is intended to be a balanced character with a very minor favoritism towards speed over armor. I got a 6 second time here, which I have only beat on one occasion when she drove straight forward instead of following her usual AI patterns and got a 4. I fully expect to never see that pattern again, so this basically ties the fastest I'd expect.

Kyotaro is an oddball. He has completely balanced stats, but being that he's a crab walker thing, he moves extremely slowly forward and backwards, but rivals if not beats Alan when moving sideways. Fortunately, the AI doesn't understand how to abuse that sideways movement, and he mostly just kinda puts around. I ended up tying my PB time of 4 seconds on this fight.

Madison is the true balanced character, and that makes him as boring as possible. However, his AI is completely crazy since he's the last standard character, and he manages to dodge enough stuff to give me an 8 second time instead of a possible 5.

Damon is the final boss of the game, and he's every bit as unfair as I'd expect from an arcade game final boss. Damon has maxed every stat on his character roster, and he certainly deserves that display. I managed to hit a sweet spot in his AI pattern, didn't get any missile collisions, and only missed one shot.

This is a PB time of 9 seconds, with the next closest time I've had being a 14, and makes up bigtime for some of the earlier problems. Also 9/10 times fighting him this way just gets me killed, so actually wining the fight is a plus.

So that's the game. Pretty great for a PS1 game, even if it does end up having far more loading and transition times than actual fights. Maybe someday I'll take a look at the arcade difficulty, but that will require significantly different strats than "go in firing blindly"