Cybernoid was unleashed unto the unsuspecting masses in December 1989. Anyone expecting a game with fun and enjoyment should look elsewhere, for this is a joyless exercise in frustration. Your mission is to eliminate any baykor pirate ships in your way while trying to get to the exit elevator. 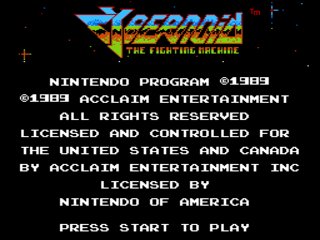 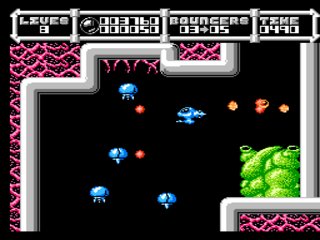 Okay fine, I'll admit that this is an awful game, one that most people don't like or care about. Simply file this one away under "they said it couldn't be done." It's so hard to learn this game that most people won't even give it enough time to try and beat it.

HOWEVER, the truth is that this game isn't really that hard, once you grasp one simple concept: You get 9 lives and you're supposed to use them! Why? Because each life comes with a full complement of special weapons, including a Shield (temporary invincibility) and 2 Genocide bombs (clears enemies off the screen). If you use your lives and weapons effectively, you should really only have to fight your way through about one third of the rooms in this game.

As if beating this game on Easy wasn't hard enough...

Only two gameplay elements change with the difficulty level, but both are rather annoying. The first is that the bubble-makers actually shoot AT you, as opposed to just randomly spewing their stuff in a single direction. The second is that all projectiles (bubbles, cannon shots, etc.) move faster.

This requires a few new strategies not used in the Easy run, such as using Shields to get past the cannons. This makes beating the game a bit tougher, as those Shields are useful in other places too. Fortunately, I reached the end with enough lives (Shields) to finish off the last couple of "impossible" rooms.