Released in November 2011, DLC Quest is an examination of what will happen when DLCs are taken to their logical extremes. In the game, you have to do the standard heroic fare - defeat the bad dude, save the good world, get the pretty girl. After first buying DLC to enable literally everything. 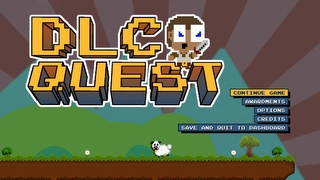 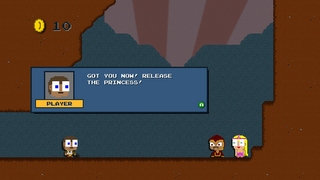 I've been an SDA fan for a few years now but have never considered myself much of a speedrunner as I tend to lack the required patience and discipline. Nonetheless, DLC Quest gave me "the speedrun itch" because it is so short, and rather caters to speedrunning with its in-game timer and leaderboards. It's also a hilarious game with clever writing, so if you haven't checked it out I highly recommend it.

Naturally the insane times on the leaderboards got me curious, and I watched the 4:35 run on SDA by David Heidman Jr., among others online, to get an idea what kind of tricks were discovered. After playing around with these tricks for a while it became pretty clear that I could improve on the existing Bad End run on SDA. I managed to beat it numerous times, but I wasn't going to be happy until I got a run that beat it by 10 seconds and didn't make me cringe repeatedly. That led to the 4:24 run you see now.

The Bad End run involves obtaining the Finish the Fight Pack, then finishing the game without buying the Armor for your Horse Pack, resulting in the bad ending.

Two tricks are used in this run:

High Jump
If you press the jump button a second time rapidly after initially jumping, you will essentially double-jump, without needing the Double Jump Pack. (Credit to David Heidman Jr. for explaining this in his run's comments, which is where I first learned it from, and Zyre for coining the term High Jump.) For optimum height, the second jump needs to be performed on the 8th frame after the first.
Falling Jump
After falling from a platform, there is a margin of a few frames where you can still perform a jump.

The High Jump allows you to get to areas earlier than you would ordinarily, and thus amass enough coins to obtain the Map Pack to progress to the Night Area without needing to encounter Random, collect the Psychological Warfare Pack or the Double Jump Pack, etc.

The Falling Jump allows you to navigate a couple of areas more efficiently, e.g. the jump from the platform with the sheep at the top of the map to the hidey-hole leading down to the Sexy Outfits Pack.

One thing notably missing from this run but seen previously in David's is attacking Smith (the gun NPC) with the sword to get him closer to the exit. As far as I can tell this is not possible to do on the current version of the game on PC. This might save half a second if it were possible.

Here's a run-down of the route:

Given those mistakes, I could probably fathom a 4:21 at best if everything went without a hitch. I'm a bit worn out on this for the moment though, and achieved my goal of beating the existing run by 10 seconds. I do hope to eventually do an any% Good End run and maaaaybe a 100% run, but those will take a lot more patience, so I may take a break first. :)

I bought DLC Quest in early October 2015, after seeing it on YouTube. So i just played casually through the game. Then I saw that I missed two achievements. I looked up and now I had a goal. Playing through DLC Quest 100% in under 12 minutes. After a few hours in, I got a 11:58. I was not done! So I played a little bit longer and after around 5 hours in total speedrunning this game my best time was 11:46. Now I learned how to High Jump. And my first run with this new knowledge was a 10:28. I was hyped and started to grind more. 12 days and 26 hours later, I had a 9:50.933. With that I was 1.8 seconds faster than the current record. My sum of best showed that I could save at least 5 seconds more. With every new time I got, there was still time to save. Nearly one year later. I am presenting a 9:21.741. This is still not the perfect run. Sub 9:20 is possible, but I’m done for now. Until someone else comes close to my time, I will try to get Live Freemium Or Die on this site.

The two main tricks I use in this run are:

1.    High Jump: done by pressing the jump button twice. Second press must be around 7-9 frames after the first press.

2.    Double Button Spamming: you can skip text and buy things from the shop with the A and Start button. By spamming both buttons repeatedly, you can save a lot of time.

There is one more trick, that I didn't use in the run: the Double High Jump a frame perfect trick with which you could save another 0.8 seconds. Right now this trick is way to hard, comparing the time you can save. But maybe, we will see this in the future?