In September 1991 the world's most accurate proletariat simulator was released unto the suffering masses. In this game you play a lowly rutabaga farmer, trying to wrest away the means of production from the bourgeois Black Knight. Being one of the privileged bourgeoisie, the Black Knight is too lazy to do any work himself, therefore he sends out enough bats, rats, and zombies to fill five low-budget haunted houses. Dark Castle had many innovations, none of which are seen today, such as the "arm's length" protractor aiming method for pinpoint accuracy, and tripping over stairs to simulate the lack of nourishment and exercise of the lowly proletariat. 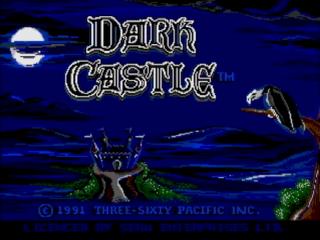 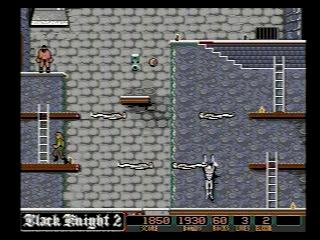 Thanks to Mike Uyama for his support, DJGrenola for helping with the site, and Nate for the dvd recorder and capturing.

Dark Castle is notorious as one of the worst games ever produced on the Genesis. When I heard this about 6 months ago, I knew I had to have the game. I didn't think I would speed run this game initially, because it was so bad, but my mind changed when I realized it wouldn't take that much work at all, its shorter than a lot of segments in segmented runs. It now holds the distinction as the fastest run on SDA with full completion.

I actually didn't know how to beat the game for a while, and I'm sure a lot of other people don't know how or haven't. The controls are pretty clunky, and its not really obvious how to beat the last room. Normally a shield is required for that room: on easy and normal difficulty, you can go fast enough to miss the bird that you need the shield for.

Level comments (I refer to point totals for level times, since the points count down at 10 per second):

1850 is the fastest I've done this in, the first jump caused me to stand next to the restart button on the console.

I hope you enjoyed this run, I recommend playing the game first before viewing, as it will make no sense to anyone that hasn't (and even then, it still probably won't make sense what I'm skipping, what can damage me, and when I take damage).