Released by Beam Software in 1989, Dash Galaxy in the Alien Asylum follows the titular character in his attempt to escape an alien world. Featuring some of the worst running and jumping controls you've ever seen and Boxxle-esque hub screens where you can trap yourself easily, this is a game that will have you reaching for the suicide button (which it graciously provides to you). 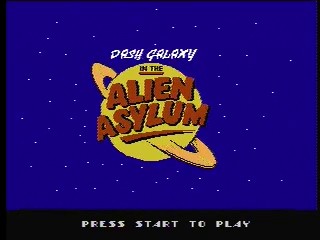 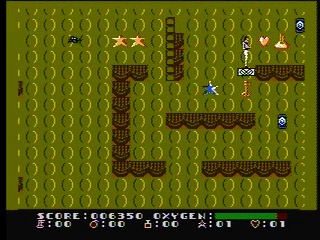 So, like most Beam Software games, this game is designed terribly. Most of the rooms have nothing of any consequence in them, the only reason to enter them is points. All of the warps I take are 100% mandatory. Most of the "important rooms" aren't even hard to enter, while crappy rooms are surrounded by laser beams and block puzzles. You can easily get stuck if you exit a mandatory room the wrong way.

1) Hitting select in the top-down parts is a suicide button that starts draining down your oxygen. I hit select as I enter rooms and elevators to "damage" myself so the oxygen countdown is sped up. Floor 21 is the most obvious usage of this.

2) Holding up allows you to turn around without losing run-speed, so I'm able to do a running jump from spaces that normally wouldn't have enough room. I thought this was a tas-only 1-frame turn trick before, then murphagator told me "dude, just hold up". Best usages are floor 6, twice in the warp room of floor 15 (which is the only hard part of the entire run), and twice in the final room. Floor 15 went so well that I actually didn't have to wait for the dino-skeleton-roomba to pass by, which surprised me.

3) Holding left while entering a room where the door has a wall immediately to its left causes the game to fail to reset your x-coordinate, so it will be the same as the last time you exited a room. This is used in the first room of floor 15 (that's why I walk slightly to the left at the start), and twice on floor 24. If you can't tell what's happening the second time I enter the room, I'm spawning on top of the key (because that's where I died), then just holding right until I die. I still don't quite understand this bug, but it saves a LOT of time.

This run is really good, most of the mistakes are invisible to most people, except on floor 22 where I go up slightly more than necessary (oh no!). I only wish I hadn't wussed out at the end and started the "horrible suicide noise" a bit sooner. Look how much health I had left!