Dear Esther, originally a Source engine mod, was released as a standalone game in February 2012. The game is based around story and features few actual tasks to complete. Instead, you venture around an island in the Hebrides listening to the narrator as he writes letters to Esther and engages in flashbacks. 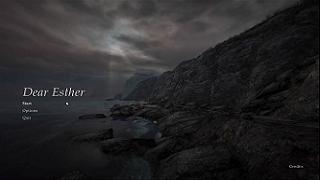 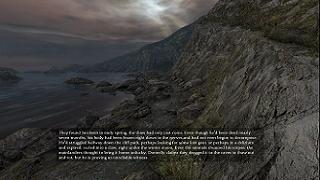 I have lost track of how long I have been here, and how many visits I have made overall. Certainly, the landmarks are now so familiar to me that I have to remind myself to actually see the forms and shapes in front of me. I could stumble blind across these rocks, the edges of these precipices, without fear of missing my step and plummeting down to sea. Besides, I have always considered that if one is to fall, it is critical to keep one's eyes firmly open.

This game involves a lot of rocks, plants, invisible rocks and invisible plants. From up in the air they are mundane, but since you can't jump, they fugue into ambiguity. For instance, I cannot readily tell whether they are solid or not. The dinstinction now seems bizzare; why not everything and all at once? Is there nothing better to do here than indulge in inconsistency?

A wonderful sight. Default has already done a run before me. It cast a light on the route for this run, all the world as if he had signed his name across the sand in untidy handwriting.

Dear Samantha, I have now spammed ADADAD over twenty-one times, but although we have all the reports and all the witnesses, and have cross-referenced them within a millimeter using ordnance survey maps, noone ever thought of using it. You'd think there would be marks, to serve as some evidence. But it was only z1mb0bw4y who thought of actually using it.

I have burned this game, I have drunk deep of it. My heart is my leg and a black line etched on the paper all along this boat without a bottom. You are all the world like a nest to me, eggs unbroken form like fossils, come together and send small black flowers to the very air. From this pain, hope. From this island, flight. From this grief, love.