Released in 1998, Deep Fear was the last Sega Saturn game to hit the European market. Borrowing many aspects from typical survival horror games, it is often compared to Capcom's Resident Evil. The game takes place deep beneath the Pacific Ocean in a research facility known as the Big Table. You play as John Mayor, an ex-Navy SEAL who joined forces with a civilian corporation known as the ERS (Emergency Rescue Services). After an UFO descends from space and lands near the Big Table, further investigation is required. 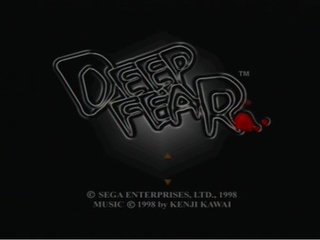 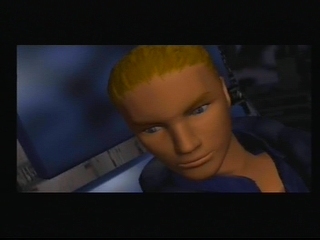 I originally intended to do this run single segmented, but since there are so many points in the game which are just purely random (like most boss fights) and can cost a lot of time and energy, I decided to go multi-segmented.

This run was recorded from the PAL release being played on an European Saturn console. There's also a japanese NTSC Version which is probably faster, but I neither have the game nor a way to run it on my PAL console.

As I'm skipping every single cutscene and FMV sequence, you probably won't catch much of the story or anything of the awesome english voice acting. So for all the Dubois fans out there, I apologize in advance! ;)

Before starting the game I turn Enemy Search on, which allows me to just press a button and automatically aim at the enemy's direction while holding a gun. This saves a lot of time and ammunition. Also you can easily tell if there are any enemies left in the room, in case you can't see them due to the fixed camera angle.

Sometimes you will see me draw a weapon, run past the enemy and then just put it back without having fired a single shot. In that case I make use of a fine bug or glitch or whatever you call it, which gives you a short moment of invincibility while drawing a weapon. If timed correctly (or luckily enough) you can avoid being hit by the enemy. This comes in handy especially against larger group of enemies or if you enter a room and something is right in front of you, giving you no chance to just run past it. However, it always cost a little amount of time to put the gun back, since you have to be unarmed in order to open a door or examine something.

Unlike Resident Evil or most other horror survival games, Deep Fear offers you an unlimited amount of ammunition and health replenishment. You can just go to the nearest storage and fill up your ammo anytime. If you find an ambulance box, you can collect up to 8 first aid kits, each healing 25 percent of your health. So basically it is very difficult to die in this game, unless you really mean it.

If you're wondering what the green or red number in the top right corner indicates, this is the amount of oxygen left in the room. If the number goes below zero, you start consuming air from your regulator, which can be recharged at the yellow boxes. You can also just fill the room with new oxygen, but I only do this twice in the game, as it is required. Just like the weapon drawing trick, putting on the regulator makes you invincible for a second. Same goes for climbing ladders and throwing grenades. If the oxygen runs out while you're in movement, John won't put on the regulator unless you make him stop, allowing you to run into the next room and save time.

The Z-button on the Saturn's control pad can be assigned to either grenades or health kits. I use this a lot in order to quickly heal myself without having to open the inventory each time I get hurt.

I usually try to dodge most of the enemies, but in some passageways that are narrow and that I use often, I just have to get rid of them. Otherwise they would drain too much of my energy in the long term. On top of that there are those unpredictable foes which you just can't tell where they'll appear, since their positioning and movement is pretty random in each game. So sometimes I just take the damage instead of wasting even more time trying to find a way around them.

The first time I save my progress is right after getting the Chemical B from the Junk-Area. The reason why I do this is the machine in the laboratory, where you have to mix the chemicals in a specific ratio (10:25). This is very easy to mess up so I save my game just in order to keep myself from wasting 30 minutes of my life over and over getting that damn ratio right. You can also use the machine to create powerful health kits, but I don't do that in this run.

Fighting the big rat boss at the end of Disc 1 is always very luck based. Sometimes (which is very rare) it goes just right, letting you kill it quickly without getting hurt too often. Most times however (as in this run), the rat just moves around way too much, hitting you all the time and forcing you to use one first aid kit after another. You need the very right timing (and luck) to make this fight go perfect, and I certainly didn't have it. After all I lost a few seconds here, but since the rest of this segment went very well, it wouldn't have been worth doing all of it again just for the rat.

After a lot of very boring backtracking through the entire facility I finally confront Anna in the fourth segment. I tried to figure out a way to skip her battle, but since you need her security card in order to board the Big Jim, it is necessary to defeat her, because you can't just pick up the card and leave her room. The fight could have gone a little better, but since it is very rare to not get hit by her at all, I didn't bother repeating this fight until it was perfect. So I just took the few extra seconds there. After all the battle went well, and since she knocked me off my feat only once, I didn't lose too much time at all.

The underwater part is pretty much just as luck based as the boss fights against Anna and the rat. In over 10 playthroughs it only happened to me once, that I got through the water with only one barracuda biting me, and I believe that was a miracle. Normally I get bitten four or five times, so I guess it's okay to just stick with that number. Considering the rest of the segment plus Anna's fight, almost every other event to come is luck based anyway. You can get through the water just perfectly and then have bad luck for the rest of the game, which would be pointless. So I decided to do everything just fine, taking a few extra seconds here and there, but still trying to clear the game as fast as possible, avoiding any mistakes. This would still be faster than doing one part perfectly and messing up on the whole rest.

Dubois' fight isn't really a fight. You can entirely skip it by just running past him. Same goes for the underwater part and the mutant cow at the Sea Farm. It took me three playthroughs to figure that out. ;)

Before retrieving the last communicator part I wasted 2 out of 5 grenades on that big monster and I draw my gun way too late to finish it off. This could have been done faster.

At the point I got the assault rifle with 21 bullets left in my shotgun I realized that it wasn't necessary to pick up the two boxes of extra shells. However, this sums up to maybe one and a half second wasted, so guess it's not even worth mentioning.

I really hate that underwater part right before the final boss. I always try to draw the harpoon in order to make the enemies attack me while I'm invincible, but it's still very luck based to make it to the other side unharmed. 1 Hit is okay, but whenever I'm recording I always have the worst possible luck and get hit 3 times by those bastards hanging from the ceiling, no matter how hard I try to avoid them. Luckily, after that they got me only one more time, so in total I took 4 hits, which is very good.

Final battle went well. Could have been done a little faster, but after all it was pretty normal.

After the final boss I went off to the Engine room to start up the self destruction system. On my way back I took the usual hits and then finally made it to the Clean Freezer, where the game ends...