Released in 1994, Demon's Crest was met with incredibly poor sales. Nintendo Power claimed the game sold so badly it actually managed negative sales for a month. However, the game has a strong cult following due to its great soundtrack, Metroidesque gameplay, and unique storyline that doesn't feature a hero as the protagonist. As the demon Firebrand, you set out to recollect the Elemental Crests from Phalanx, who stole the crests from Firebrand when he was injured by the Demon Dragon. 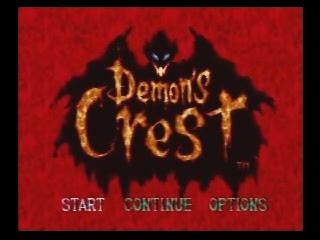 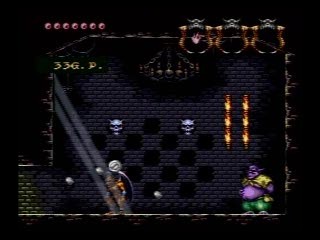 Out of all of the SNES games that I have played, Demon's Crest is definitely one of my favorites, and has one of my favorite soundtracks. The atmosphere and gameplay mechanics are great, and the storyline isn't half bad at all.

However, it's very easy to miss the bulk of the game's content. As you can see, it's possible to beat the game almost immediately, but as you'll see in the 100% run, a lot of the best content of the game is a bit out-of-the-way and is easily missed. Adding this ending to the game may have been a mistake; I bet plenty of people saw this ending, and returned the game for being "too short."

This is a very solid run. The best points of it would be the entirety of Level 1, and the final battle with Phalanx. Honestly, if you're interested in checking out the game to see what it's like, you should go for the 100% run, as most of the game's best content can be seen there. Still, those interested in seeing just how quickly this game can be beaten should find this run to be quite interesting.

My copy of this run is just over an hour long, with a sixth of that being the ending sequence.

Unlikely as it may seem, this game has had something of an influence on me. My friends and I love Demon's Crest; for years, we had a complex RPG going that was based on this game. And, I never get tired of the music in Demon's Crest; I would say it has one of the top three SNES soundtracks.

A 100% run on Demon's Crest means starting from a new game, and beating it after collecting every item in the game: the five Crests (including the five pieces of the Crest of Fire), five Vellums, five Urns, five Talismans, and every life extension. This involves a lot of backtracking and unearthing secret locations. There is a blank spot in the game's submenu at the end; this space is for the "Ultimate Gargoyle" form, which can only be attained by using a certain password, which the game grants you after getting this ending.

I'm very happy with the way the run turned out. Almost all of it is solid, or at least entertaining to watch. I used a few renegade tactics well, such as switching to the Crest of Time against Holothurion. The second and third battles with Arma were hard-fought and among the most exciting parts of the run. With the exception of the headbutting mini-game, I think I may have a flawless level order here... I could have used some Sulfur potions to speed up the backtracking, but I can only think of one, maybe two spots where it would have saved even a little time. I was low on money, anyway. The only ugly part of the run, unfortunately enough, would be the final battle. The first two phases went well, but the third was rather pedestrian. I even had to use my second Ginseng potion.

Final battle aside, this is the best Demon's Crest run I've ever done. Have fun.