Demon's souls is a game developed by From Software, released in Japan on February 5th 2009 and in the US on October 6th 2009. It is notorious for its unforgiving difficulty, simply put; this game was made for the masochist inside you. 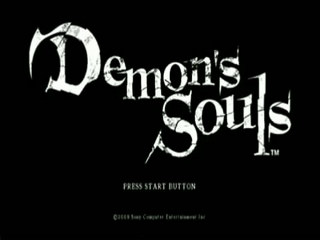 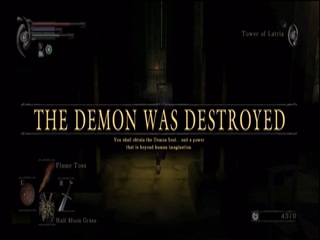 I am glad I've finally succeeded making this run, more than in one occasion I was about to quit but nothing worth doing is ever easy.

I'd like to give credit to the Japanese run, letting me know of many shortcuts I didn't know about.

I started work recording this run for about a month and a half, and many months prior to that figuring out how the game worked, after i witnessed the Japanese run i knew it could have been done much better so i decided to give it a shot.

1-1: not much to say here, pick up the thief ring, get firebombs and turpentine for the boss, and hope you get lucky in the boss fight, this is a tough fight because it will ALWAYS be different regardless of skill, you are not fighting just one boss, it's also 20 enemies with their own random attack patterns.

Nexus: talk to the monumental; spend 5 points on magic.

4-1: pick up crescent falchion +1, perform shortcuts (the first shortcut is a pain to get to work during the first try, but i got lucky) hit the boss 6 times, then 7 times on its side, and it should die no problem.

3-1: pick up magical and clever rat's ring as well as the special key, the boss will never attack during the first 8+ seconds, that's the only way to know who's real and who isn't.

3-2: I love maneaters, they killed me many times but after the +200th try you get good enough to tame them, no matter what they do they'll never hit you.

Nexus: 19 intelligence to have 3 spell slots as well being able to perform homing soul arrow 3 times without using spice.

Nexus: 13 vitality (for the 2-1 shortcut just in case) acquire homing soul arrow, discard soul ray, consume legendary soul and buy 29 spices for the rest of the run (no more trips to the blacksmith needed)

2-1: perform shortcut, equip thief ring before the boss fight so you can get close to him more easily.

2-2: 30% flamelurker, i died countless times here as you might imagine, so i had to figure out a way to safely and quickly kill him.

2-3: nothing to say here, he will never kill you as long as you're close to the wall and his finger when he hits you, if you're too far back, he will hit you, and the pillar he destroys will also hit you, which means instant death.

4-2: That last reaper is a pain, if he hits me i die, which is why i had to heal up before i went down there, i didn't lose too much time though, the reason i went "slow" on the boss was because if you get too aggressive (attack him as he does his whole hurting animation) he'll instantly start attacking you 1 or 2 times, which wastes a lot more time than simply waiting 1 second per attack.

4-3: very easy, if you get close to where the white herbs are he'll usually come down quicker, if you wait too close to the fog gate or don't kill enough flying mantas he'll keep flying around for a long time.

5-1: this map is a pain, but i didn't make many mistakes here, i only got hit once by the giant goblin, which almost killed me, but didn't waste too much time.

5-3: i equip the rat's ring just in case, you don't have to worry about garl, just wait for him to attack, then backstab him.

1-2: the boss fight was sloppy, for some reason the damn homing arrows decided to attack some archer, so i had to play it safe and use soul ray, much quicker to hit and less dangerous (homing arrows have a bad tendency to disappear mid way, or hit its shield)

1-3: it went pretty well, the boss fight could have been done a couple seconds faster if i had hit him with the sword on the first try.

1-4: i had to way for the dragon to kill the first fat minister, he's a total pain and destroyed my run more than 5 times before, he usually hits you with fireball, then the dragon hits you with his breath, means install kill, the boss fight could have also gone better, but he wasn't cooperating much, and given the fact i don't have warding, i can't be too careless.

King Allant: kill him with homing soul arrow, believe it or not he managed to kill me one time (i wasn't speed running at the time) and if you're wondering if something weird happens if he kills you, no, nothing happens.

So there you go, Demon's souls done in nearly one hour, i am so happy to finally have my name on SDA and under such a great game, if you have any questions or want some help my msn is limpbizker666@hotmail.com (i made that account when i was 12 and am too lazy to change it)