This 1999 kids' game by Mattel has been pegged too difficult for kids, but technical issues notwithstanding, is more or less okay. It takes place around a seaside hotel called Lighthouse Cove, the scene of a grand jewel heist. Barbie and Ken are there, of course, along with some friends. Unlike the toys, here everyone has actually reasonable bodily proportions, and while none of them have anxiety disorders or crippling depression, one at least has plain "crippling". The most striking feature is how every girl's name in or out of existence was voice-acted into a file so they could incorporate the player's name into Barbie's voiceovers. The spellings even accounted for every severity of dyslexia. 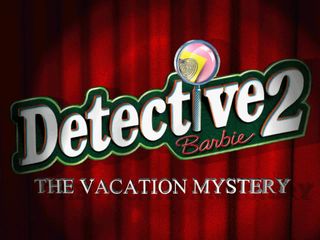 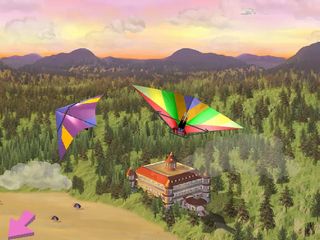 A copy of the run with my commentary is here: https://www.youtube.com/watch?v=ZtBZ87pfv7A

This game is randomized. All the clues and puzzles, as well as the order you go through them, are randomly selected, at the start of the game. I estimate that the ideal route for the game occurs less than 2% of the time. It is far, far more common to get a pathway that takes you through one of the glitched locations, which are the maze, the gazebo and the gameroom passageway. If you go in those places, the game automatically crashes.

The game's general route is this:

In a single segment, it doesn't matter TOO much if you get the beach cruisers or hang gliders first. Since I got hang gliders first, I was able to save at the lighthouse twice. When the game reloads, Barbie is standing in a different position. This is a minor timesaver.

In Step 6, Barbie goes to a random clue location, such as the greenhouse, the attic, or the guest room. The guest room is closest to the lighthouse, so that's the one you want. There are three possible hiding spots in teh guest room. Oddly enough, this is the only element of the game that is truly random, in that it can change when you reload the game.


It should probably be noted that the controls to this game are not very good, and it's easy to have Barbie zig-zag around items or get stuck in a corner. It's always faster to avoid these unnecessary movements.

The biggest mistake of this run is around 2:10 of video 1, where the key drops from my hand back into the inventory. I kept going, because getting the best route is so rare.