Devil May Cry 3, released in March 2005, takes place 20 years before Devil May Cry. Dante is confronted by an unusual gentleman who informs him of a "Party" that Dante's evil twin brother, Vergil, is holding. Less than ten minutes later, the Temen-ni-gru, a tower that once served the link from the Demon World to the Human World, rips up from the ground, bringing with it a slew of demons and hellish monstrosities. Now, Dante has to race to the top of the tower using his skill in combat and his Devil powers to stop his brother from opening the portal to the demon world. A new version with the suffix 'Special Edition', released in January 2006, lets you play as Vergil. 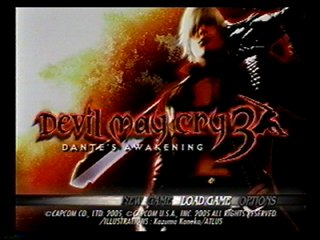 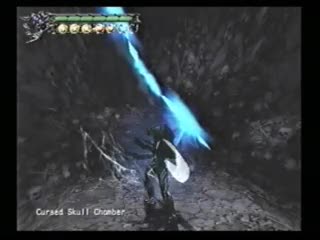 First off, I feel it's necessary to thank the following: BallofSnow for the support and helping renew my interest in starting and finishing the run; Nate for doin' the thing he's been doin'; Joch (A.K.A. "The Jochness Monster") for the help and support he gave me especially when mission 12 rolled around; Devil May Asian and Rustedfaith for their banter and general hijinx; Ifrit and Mike Uyama for inadvertently helping me out; Da_Dood and guitarslinger44 who tipped me off to a Holy Water I never knew existed, kip for his suggestion to what to DO with said holy water which comes into play later on, Xarugas who ALSO helped with "That Geryon Thing" along with Volteccer Jack and Madsharkk (All three from Gamefaqs) and of course, Radix for the most obvious of reasons.

So here it is, a full speed run of Devil May Cry 3: Special Edition on the "Hard" difficulty setting using Vergil. That's right. For any DMC3 fans who've been completely neglecting the franchise since the third was originally released, a Special Edition was re-released back in January that included Vergil as a fully functional and playable character with his own style, moves and even a re-worked weapon swap system where Vergil has access to all three of the weapons (Which he starts with) at all times (unlike Dante who's stuck with two). To trade this off, Vergil only has one ranged weapon, his Summoned Swords attack, which work FAR differently from how Dante's guns work, as does how upgrading weapons and such work on Vergil's campaign, being reliant on your style level to purchase upgrades instead of simply having the weapon making his campaign far more interesting to run.

For starters, I apologize for Mission 2. That was a miserable attempt that should've never made it into the final product and while producing a second version, I was able to chop off 16 seconds ALONE on this stage. The same goes for Mission 5, where I've cut off another 20 seconds or so from the final time. My purchasing order is for the most part, fairly sound throughout the first 10 missions of the game since I NEED the Devil Trigger orbs, I need Starfall, I need pretty much everything I pick up and interestingly enough, I'm able to actually afford all those things before I actually need them. It works out very nicely.

In hindsight though, my purchasing order in missions 11 and above need to be changed a good bit. I should be picking up Stinger Level 2 immediately after Mission 10. I don't NEED Spiral Swords and the only reason I pick them up (And so late into the run) is that I thought that they'd be far more useful against mission 18 than they actually were. My bad. Future revisions of this run will include me purchasing an extra holy water somewhere in here for use in Mission 16's Living Statue Room (Or saving Mission 15's) and also possibly an extra one on top of that if I save the one from Mission 15 for a rematch in Mission 18. And of course, I've simply improved so much since I first started playing with Vergil that there's bound to be plenty of time saved just from an overall superior execution.

And I've had someone claim to beat my mission 3 time by well over 20 seconds. I GOT to figure out how he did that.

Sure, I've got a few regrets with this run(2, 5, 17), but despite that, the run overall is actually very tight. Don't think that I'm done with this game just yet though! There is a revision in the works which will hopefully shave the time down even further. As of this writing, I'm a minute and a half under this run's time by the halfway point and it's some VERY impressive stuff... it just still has a ways to go before submission. In the mean time though, I hope that you all find this run very entertaining and keep an eye out for my next project when it comes around. Contact me by "Psychochild" on the SDA forums or PM me via AIM where you'll find me hiding under my SUPER SECRET ALIAS, SpasticHeathen.

Well, here it is... (Deep breath) My Devil May Cry 3: Special Edition Segmented Heaven or Hell Any Percent Turbo Mode Gold Orb Fresh Super Dante Speed Run! Where as my last few segmented runs were the product of months of dedication, this one... not so much. This run came about quite simply from a thread at Phantom Babies, a Devil May Cry forum I frequent. The thread was about Devil Triggers and the effects with different Devil Arms equipped. It was a post by Ryan86 that got me started on this.

So I load up my version of S.E., started playing around, and eventually I begin to wonder what it would be like to do a Heaven or Hell run.

This is where I try to justify every category in my gigantic run description.

Devil May Cry 3: Special Edition: Where as Devil May Cry 3: Dante's Awakening's Heaven or Hell mode used the enemy spawns from the Dante Must Die difficulty , Special Edition lives up to its reputation of being the easier of the two and only uses spawns found on the Hard difficulty mode. Most people don't know it, which is why I feel I need to mention it here, or else people would start wondering where the hell all the wraths are in mission 1 that simply aren't there in my run.

It's made into two segments for one very simple reason. Two, actually. Make that three. The first being that I wanted this run to head out along with my Vergil segmented run. The second - Dullahans. I NEVER thought I'd ever find myself saying this but the Dullahans are probably the most frustrating enemy you can find on this kind of run. They are a RUN KILLER. You HAVE to use melee attacks, you HAVE to attack them from behind while avoiding the front half unless you're trying to commit suicide (More on that later) AND they're so huge they often block other Dullahans in the same room which leaves you very vulnerable to be double teamed. Such pains. Scratch yourself on the side of their shield? Dead. Last, I really wanted to get a Turbo Mode run onto the site just so the category exists for this game. I didn't want to send a full run like my new Vergil just to have it rejected because it was in Turbo, so a quick, easy run like this was the obvious answer.

Heaven or Hell difficulty meanwhile can be summed down to this. Everything dies in one hit. Bosses, enemies, Dante... If a bullet even GRAZES your foot (As it did with Jester) you're dead. Hence what makes Dullahans such a pain.

In this run, I do pick up Air Hike for both Beowulf and A&R for obvious reasons and I also pick up a Holy Water (With hilarious results) for the chessboard in mission 18, hence the Any % marking. Of course, I also level up Trickster throughout the run though once I get Devil Trigger, I don't use it much anymore.

Two exclusive features of the Special Edition, Gold Orbs and Turbo mode, are used for this run. Some people (Wusses mostly) just couldn't handle the fact that if you died in D.A., you would have to start the mission over unless you had yellow orbs on you. You know, the same exact way that DMC1 handled death. So in the re-release, Capcom implemented a checkpoint system that allows for some death abuse in Missions 8 and 15. Turbo Mode meanwhile made things just a bit more interesting for me by boosting up the gameplay speed 20% and allowing me to further push the entire "Fastest completion possible" theme further.

Last, that leaves me with Super Dante. I do use a fresh Dante in this run which means no devil trigger until mission 7 but once I do, it never goes off due to the massive speed buff Cerberus offers (Either 20 or 30 percent on top of Turbo's 20% increase by default).

So, now that we have all the basics covered, it's time to nitpick.

Everything from missions 1-12 is excellent, though fatigue becomes obvious throughout mission 13. Even then there's some movement flubs in a few missions where I get turned around a bit due to the ultra-twitchy Dante and a targetting issue in mission 6 in the Trial of Fighting. Mission 11 does have some significant issues in the Altar of Evil room when I try to get up to the second floor which costed me several seconds before I could get up there. The ideal fashion, as I COMPLETELY drew a blank when I got there, was to wall run up and then air hike to the second floor. Again, I just blanked there and it costed me a few seconds.

Mission 14 has some movement issues that could have been cleaned up a bit but otherwise isn't worth dwelling on (2:30 is the lowest I've been able to do anyway). I was so wrapped up in living and so pumped that I completely forgot to change from Beowulf to Agni and Rudra. Because of that, I lost five seconds (I counted!) trying to use Straights to smash the wrecking balls in the Chamber of Sins to reach the Moonstone.

Of course, you could argue that it's time saved from having to switch the weapons, but it still looks sloppy if you asked me even if I DID come ahead in my times because of it.

Mission 17's Doppleganger is just ugly. When I was practicing, I found that Aerial Cross, the A&R move I used, shattered the window in three hits. I found that odd, but justified it as it being an attack where both his weapons got a "Hit" on the window, meeting the five smash quota, much like how an average helmbreaker is actually two hits, one that deals damage, the second that deals damage and knocks the enemy back.

Well, I never practiced the stage again, I was more focused on 15 in particular, so when I went back there, lo and behold my plan DIDN'T work out which really threw me off. So, I switched to Revolver and finished the fight, costing me about eight seconds or... five seconds, depending on when you count (After the first charge or after I shatter the first window and miss him).

I have no doubt in my mind that this run could be faster. Sub 1:00:00 would be hard to reach knowing what I do, but I imagine this could probably be handled just a minute or two faster if I were to fix up the problems I found in the run. Keep an eye out for a revision when I get around to it!