Released on May 2012, Diablo 3 resurrected Diablo so that a new hero could rise up and defeat him yet again. It also added new features and classes, as well as auction houses which were taken down on March 2014. Overall it improved much over its predecessor and is well received. 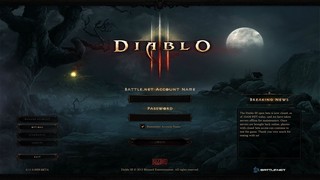 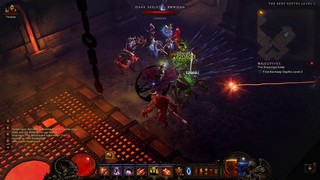 First to explain some key concepts of these runs. Demon Hunter is currently the fastest class by far when it comes to NG+. The sole reason of that is Vault. Movement speed is capped at +25% on items, so after you use Vault with the Tactical Advantage passive you'll be running at +85% speed for a few seconds. But the thing is that the actual vaulting is equivalent to a +300% movement speed, and attack speed decreases the startup frames of Vault, so with a high attack speed you can spam it almost endlessly with the right equipment. Hitting enemies with Multishot and picking up health globes replenishes Discipline and the Preparation skill completely fills up your Discipline. There's a 30% chance that the cooldown is not triggered on Preparation so if you're lucky you can get a lot of extra Discipline so that you can Vault like a mad man.

I apologize for the low frame rate but I couldn't get it any smoother even on lower graphical settings. The game does not like when you go this fast and kill so many enemies at the same time.

Act I
This is the longest act but still the most optimized one since I've played this act way more than the other ones. Cathedral 1 is the first random dungeon and I got a decent spawn. Defiled Crypt causes the most resets by far since you have a 1/3 chance of finding the correct one. Cathedral 2 was good and Cathedral 4 was mediocre, could be a lot worse though. Khazra Den was good, if I don't get one of the two best spawns I usually reset since the other two are so far away. The next random area is Caverns of Araneae and I get a decent spawn here. Halls of Agony is where I saved a lot of time but I made a huge mistake in the second level where I didn't realize I had taken the wrong path for some reason. Still these areas are a nightmare to go through when you've got a good run cause they can be really cruel.

Act II
You probably find this act to be the largest when you first play through the game but there are a lot of areas that you can skip so it's actually slightly shorter than Act I. The first random area is Sewers of Caldeum but the first real problem is Dahlgur Oasis. The Forgotten Ruins here can spawn in a ton of different spots and unfortunately I got pretty much the worst one. The dungeon on the other hand was pretty good. Desolate Sands is similar to Oasis but I got great spawns here, was pretty much flawless except for a dead end in Cave of the Betrayer Level 2. Perfect RNG on the first two Zolten Kulle dungeons but the opposite on the third, which is too bad since it's the last random area.

Act III
I'm using an outdated strategy for raising the catapults. It's better to wait a little bit at the first catapult and then move on to the others. The Keep Depths went pretty well, the first level is always huge. Ballistae spawns on Fields of Slaughter were perfect. Arreat Crater can be a run killer if you take the wrong path, usually it's a 1/2 chance of doing so but the dead end I took wasn't that long. The towers and The Core of Arreat are easy since they're pretty linear.

Act IV
The final act is surprisingly short but still a bit annoying. The Hell Rift portals in the Gardens of Hope 1/2 are positioned randomly so if I don't find them on the direct path to the next area I have to reset. The Silver Spire 1/2 are the most random areas and can lead to a reset as well if you get lost. Level 1 could have been a bit faster but level 2 was great. At the Diablo fight I switch weapon since my damage is poor with speedrunning gear. It's very important to kill Shadow of Diablo instantly or he will teleport around and delay the fight.