Released in November 1997, Diddy Kong Racing is a Mario Kart clone with boats, planes, and a story mode. It featured a roster of a bunch of characters made up on the spot, but nevertheless Rare would pick up a couple of them and give them their own series, including one of a decidedly different nature. 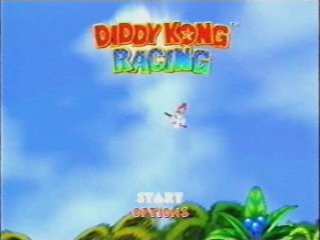 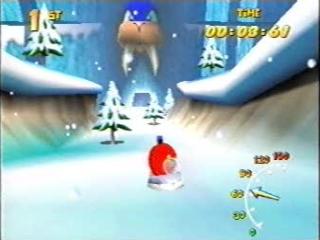 I call it a 100% run, because I do the last (fifth) trophy race which can be skipped and I also unlock the secret character Drumstick. These two things could be skipped in an any percent run. All other things like the TT amulet, the first four trophy races and the magical amulet can't be skipped (as far as I know).

Back to the run: I used Bumper. He and Banjo seem to be the fastest characters besides Krunch, TT and Drumstick. However, TT and Drumstick are secret characters and this is a "new game run", so I couldn't start the run with them. Krunch's handling is the worst in the game. Never use him. So then I had to decide between Bumper and Banjo, but because Bumpers handling was a bit better for me, I took him.

During the run I use all advanced techniques: rapidly pressing the A button to go faster, going off the A button before zippers, snaking, barrel rolling, wallboosting, ..., but I want to mention that I used no turbo controller. I change the course map to the speedometer at the beginning of the game. So you can see that my speed isn't always constant and that no turbo controller was used.

Before the run starts I go into the cheat menu to ... well, to enter a few cheats ;) No not really. I just turn off the secret characters, so that I can unlock Drumstick again during the run.

Here is my any percent, new game+ speedrun for the N64 game "Diddy Kong Racing".

It's a new game+ or special run, because I use a secret character that isn't available when you play the game your first time. You can unlock this character by beating him (or his ghost) on all time trial tracks. You probably already know who it is: TT, the clock. There is no doubt that this character is the best in the game, because it has excellent acceleration, top speed and handling. The run is also any percent, because I don't do the last trophy race and I don't unlock the secret character Drumstick (who isn't needed anyways, because he is worse than TT). As in my 100% run, I make use of all advanced driving techniques. But again no turbo controller was used.

The strategy is (nearly) the same as in my other DKR speedrun. Well, it's a racing game and it's just do drive around the tracks as fast as possible. And because you need a certain amount of ballons to enter a specific track, there aren't many possible strategies. So I do one whole world and then move to the next one. Changing between the worlds would take too much time.