Released in April 2002 by Fox Interactive, Die Hard: Nakatomi Plaza puts you in the bare feet of New York police officer John McClane during the events of the first Die Hard movie. The FPS allows the player to live the movie almost exactly as McClane did and even throws in a lot of side adventures and floors not explored in the film. 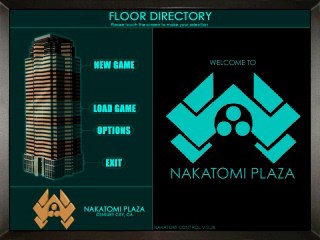 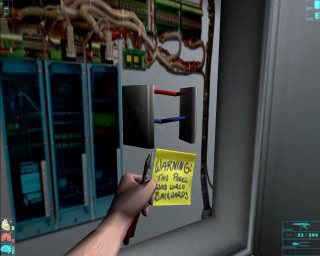 A huge thanks to Radix for being patient, tolerant, and very helpful and for accepting the run. Another huge thanks to Nate for his FAQ and for capturing segment 16: In the Vents.

HI! :) This is my very first speed run and I'm proud of how it turned out. I think you'll be able to tell this is my first time *blushes* Die Hard: Nakatomi Plaza received lackluster reviews and a fairly negative response from gamers, but I'm a fan of the movie and the game itself is something of a novelty; I've never come across anything like it. I don't think the game is really that bad. Not great but not horrible. Nakatomi Plaza originally started as a Half Life mod, but Fox Interactive bought it and the game transferred to the Lithtech engine. I would've liked to have seen this game on the Half Life engine, but alas, beggers can't be choosers or whatever.

Some basic info on the game:

3 "health" bars: Nakatomi Plaza incorporates a 3-bar health system that affects the overall performance of the player. The first is the most important: physical health (the bar next the the heart symbol). When this bar goes, you go. The second is the second most important (notice a pattern?): stamina (the bar next to the lung symbol). This affects how fast you run and whether or not you can jump. Running and jumping depletes this bar. Because of this, and the fact the game runs on Lithtech, bunnyhopping is futile; something that might've been possible on the Half Life engine. Also, the speed of your running is relative to how much bar you have. The third bar is the least important: morale (the bar next to the brain symbol). Apparently, this meter affects the enemy A.I. If the bar is fairly high, the enemy acts more agressive; if it's low, the A.I. cuts you some slack. Personally, I think no matter where this meter happens to be, it doesn't change the fact the terrorists all drove in on the short bus. The meter itself is affected by what's happening to the character. If you get some health, the meter goes up; you get shot, the meter goes down. Either way, it's pretty useless.

Highly inaccurate weaponry: Self explanatory. The MP5 is the best example of this. Also, on the more powerful guns such as the M60 or the M16, the muzzle flash blocks out the reticle and the enemy you're shooting at, making it difficult to maintain a decent aim.

Sequence breaks: There are hardly any to speak of. Like the movie, the game takes place completely within the confines of the Nakatomi building, meaning no wide open spaces like in Half Life or Far Cry. In a hopeful situation, I could shoot out a window, scale the side of the building, and blow Hans away right off the bat. But the maps are built seperately, like "chunks" of the building. Each level is not contained in one giant model of the tower. I make a point to show this at the beginning of segment 28: Just Like Saigon. At the beginning, before I swing through the window, I look down. You're able to see only the top portion of the building, with the picture of the ground and the cityscape in the background. The only sequence break is near the end of segment 15: The Architect, where I crawl into the elevator before the architect. I wouldn't even call it a sequence break, but it saves me a few seconds and allows me to kill the last to terrorists more safely.

The flow of the run: My stamina bar doesn't last forever. There are plenty of parts where I run like an oompa loompa on crack, and there are parts where I take a backseat to speed so I can regain some stamina. In general, I didn't like my stamina to be in the yellow or red. There are levels in the run where I don't adhere to this, though. It all depended on the situation, and stamina management and planning could've been better. Also, there were times when I could've been moving ahead while shooting at terrorists, but I didn't in order to maintain my accuracy. So I apologize if the flow of the run is a little spastic :S

Mistakes: Theyr'e inherent and pretty obvious. I can't justify them, but they weren't huge or horrible or anything.

There are some things in the run that might strike normal speedrunners/viewers as time wasters, but there is a method to my madness. There are also some things that might strike you as strange or pointless. A few of these things are just simple old mistakes and a few really are strange and pointless :P I will explain, though. In segment 1: Nakatomi Plaza, I crouch through the elevator doors. This saves me a little time since walking through the doors too early would bounce me back into the elevator. In segment 5: Down the Shaft, I pause before I go through the door past the two guys debating which wire to cut. This is because the terrorist behind the door is scripted to throw a flashbang. I wait for it to happen, but it doesn't. *shrugs* Better to lose a second in anticipation than to get blinded and blown away. In segment 6: Welcome to the Party, everything goes smooth except for the terrorist I shoot at through the glass door. In the thousands of times I'd played the level before, he went down without a problem. This time around, though, he decides not to. This takes a few seconds. In segment 8: Argyle's Run, I get a little confused as to which direction some of the terrorists are supposed to come from. Another error of anticipation. In segment 9: Playin' the Hero, I have to kill all the terrorists in the forklift room to progress. In segment 12: Aftermath, it's the same deal. I have to kill all the terrorists in the level to progress. In segment 13: Clearing the Bird's Nest, the M16 is put into effect. I do this just to show what it looks like and stuff, but I put it away shortly to conserve my Steyr ammo. The M16 and Steyr both use the same ammo. Also, I get lost in the construction area near the end. It's obvious since I panic and run like the dickens when I realize my mistake. In segment 15: The Architect, I get into the game a little bit. Also, there's one point where I backtrack to get the architect because his A.I. doesn't want to follow me. When I'm in the elevator shaft, I start to take damage from the fire on the other side of the wall. And the terrorist I shoot above me is scripted to climb down and attack me after the architect hops on the elevator. I beat him to the punch by using the aforementioned "sequence break." Segment 16: In the Vents has an interesting story behind it. Well, not that interesting. I had to have Nate capture this for me from VHS because Fraps caused this level to glitch badly. When Fraps was recording I couldn't get into the vents for the life of me, and if I did it took literally 3 minutes at least. This was strange considering I didn't have a problem with vents earlier in the game. The level goes fairly smooth, though. Segment 17: Send in the Car, is a tad sloppy because it was one of my early practice runs of the level. It doesn't go as smoothly as hoped, but it doesn't go bad either. I had to use this recording because I hit the end of the level. This automatically replaces the autosave with the one for the next level, and there was no way I could go back. In the room with C4 strapped to the chair I run all the way to the opposite window in order to trigger the "car" cutscene. In segment 20: Coulda Used His Shoes, I constantly take damage because of the glass in my feet from the previous level. The goal of this level is to get to the bathroom and find some bandages. In segment 23: R&D Lab, the four switches I pull in the control room kill a buch of terrorists in other rooms later in the level. It's very convenient, health wise. Also, I ram the last clean room door a few times to trigger the thing to open. Stubborn airlocks! What's the world coming to? Segment 24: Fumbling in the Dark is one of my least favorite. Near the beginning, I run down the stairwell to evade a terrorist who is scripted to enter behind me after I kill the first terrorist. Then, when I get to the door that's "Argh! Locked!" I turn around to make sure the two terrorists behind me are good and dead. One of the requirements needed to progress. At the end of the level, I have some bouncy difficulty getting into the elevator shaft. Segment 25: A Fish in a Barrel is the most boring segment in the run. I pretty much have to sit on the elevator and twiddle my thumbs. Everything I do in this level I do to up the entertainment value, or try to. In segment 26: Karl's Revenge, I start off running. A little later I jump into an elevator shaft and start scaling the wall. I open the grating at the top and blast the two terrorists below me as opposed to moving forward. If I move the forward, the guy closest to the top of the screen runs off and triggers two more terrorist ahead. I kill both terrorists before I climb through the grating to save some time, ammo, and health, the latter of which is desperately needed by the end of this level. In segment 28: Just Like Saigon, the silly fire extinguisher keeps running away from me at one point :P

Those are about all the strange/interesting/whatever points I found that I felt needed some explaining/commenting. Anything else not mentioned that you see in the run is probably a mistake. I could babble on forever about the run, but I'll stop here. I hope you enjoy, and if you have any questions or comments feel free to post or drop a message =)