Released in November 1993 by developer Virgin Interactive, the Genesis version of Disney's Aladdin was one of the best selling games on the console. Taking control of the titular character, players are lead through a loose retelling of the animated film's plot, complete with flying carpets, genie lamps, angry guards, and a princess named Jasmine to be rescued from the clutches of Jafar. 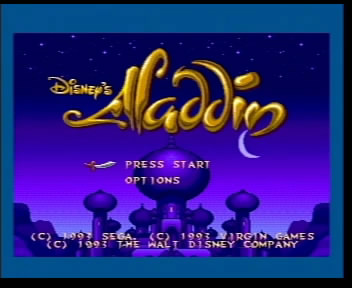 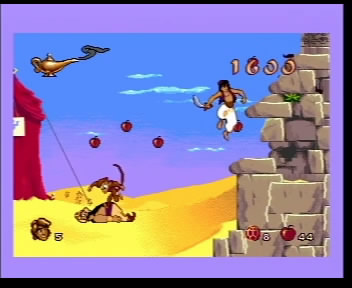 This run was made on a trusty Mega Drive Model 1 (PAL). Thanks for still working so well after so many years, although you could have made a better job with the RF signal to the TV. One third of my runs I had to play in colours fluctuating between regular colours and a black and white display, one other third of my runs in super saturated colours.

Disney's Aladdin, a pretty good platformer made by Virgin Interactive (not to be confused with the Aladdin game for the SNES which was made by Capcom and is a completely different game).
One annoying thing about the game is how the animation system ties in with the hitboxes. While running full speed forward and swinging your sword against an enemy you might sometimes take damage from them unless you time everything perfectly. Basically you have to line up both the running animation, the sword swing animation and the enemy's moving animation perfectly in order to hit it before Aladdin takes damage from it. It's pretty much random whether or not you'll be taking damage from the enemies since you would have to be consistent with which frames you initiated the running animation on at all times in order to avoid this happening.

One main trick used Alot when running this game is stop-running. When Aladdin has been running for enough animation cycles he will make a skidding animation when you stop instead of just plain stopping. If you immediately start running again when in the skidding animation you will be gain a slight speed boost for a very brief period of time. There is however a slight thing preventing this from being used all the time. As soon as you jump, swing your sword, take a hit from an enemy or do pretty much anything except running straight on the ground, the running animation will be reset and the next opportunity for a stop-run is delayed.

Another trick used a couple of times is the long-jump. The long-jump is basically a jump executed immediately after a stop-run which will then add the speed-boost to the length of the jump.

I delay a stop-run before the second guard thus making him step forward onto the hot coal so that I can pass him without having to reset the running. By holding jump when in the falling animation Aladdin will receive a higher bounce from the camel allowing a shortcut. The first genie head is not avoidable even if you went the normal way so we're having a forced bonus round for this level taking up an extra 4 seconds. In the bottom right section of the level I stop-run in just the right spot to prevent one of the sword guards from spawning due to max sprites on screen. Randomly, the flagpoles might decide to not load at all forcing you to scroll them off screen and back again. This would yield an instant run reset, but fortunately it didn't happen all that often.

You are invulnerable for a few frames while swinging your sword. This can be used in a few places where the hitbox is small enough, like the moving ground spikes in this level. The snakes are very difficult to hit while running. The same is true for hitting any enemy while running, but the snakes are that much extra difficult due to having a low positioned hitbox. The trees, ugh so many runs ruined because of them. Aladdin goes into a falling animation while standing on them, making him slowly slip off them. Your jumps may or may not register when you are on these kind of special objects so more often than not, you end up running off the tree edge because you jumped but nothing happened. I don't know what happened at the black lamp. That knife guard has never been affected by it before and now all of a sudden he goes and drops his pants. Someone once said that in every run there's something occuring that never happened to the runner before. This was definitely it, as the guard ended up in the wrong position and ruined my long-jump over the spikes. The next snake shows off his fancy small hitbox and avoids my swings completely and thus damages me twice. This doesn't cost me any time though, since I still have enough health to finish the level without stopping.

Not much to say about the beginning of this level. I collect the flutes in order to reach the higher areas. I avoid swinging at the sword guard after taking the fourth rope or else Aladdin will end up grabbing the Genie head with the swing as well. I skip picking up a flute in the middle section since the next rope will show up anyways. This flute is in fact triggering the longer rope ride just before the boss so skipping it saves around 10 seconds (What do you know, the TAS might actually learn something from me). Near the left end of the middle section I take a small shortcut by utilizing a long jump. Hitting enemies from above when you are falling down on top of them requires a very precise start of your swing animation. The problem is that your run animation determines when you will walk off the edge which in turn affects when to start the swing. As is the case with everything, you oftenly end up taking damage from the enemy instead. The miniboss goes down stupidly fast with the apples. The flute won't appear until you move off screen and back. The boss guard goes down optimally with two hits each jump.

The stepping stones in this place used to be a bane when playing this game back in the days, but they're really not that difficult traversing since it's a fixed rhytm. Before I say anything else, NO, I couldn't have reached any of the chains from one lower stepping stone despite it may have looked like it. Aladdin just won't grab the chain if you try it from anywhere else but the top stones. Right after the 4 swinging balls your jump will sometimes be stopped mid-air due to the lag caused by the scrolling of the screen, which is exactly what is happening here. The third stepping stone of the final long stretch might sometimes decide to drop you right through it sending you back to the bottom again. I'm still not sure exactly what causes it, but doing a forward jump instead of a standstill jump seems to help in preventing it from happening.

This level is pretty easy, there's not many places where you can screw up. These mini-geysers might decide not to trigger when you land upon them. This is especially happening when you land on them at the same time as the impact animation of the statue's projectiles are present on screen. Hitting the boss as soon as he is vulnerable is easier to accomplish with jump hits. With perfect timing it is possible to land and immediately jump off the rug to get enough height for the ledge without having to wait for it to ascend. I press the jump button a few frames too early this time around so the jump doesn't register and I miss out on this small timesaver.

The jump at the first Genie head is a precise one. You have to make a middle height jump in order to avoid the Genie head without falling into the lava. I had room for one more stop-run just before this jump, but adding that in will quite likely cause Aladdin to long-jump instead which would hit the Genie head for sure. The time gain from doing stop-runs is most noteably seen when being chased by the huge boulders. Normally the boulders will have caught up to you just as you reach the edge but with stop-running they are still close to off-screen when Aladdin reaches the edge. I get hit by one of the random falling rocks while in the air forcing me to turn around and redo the jump. Getting hit while in the air will slow down your jump so I wouldn't have made it to the other side if I had just kept going forward.

Probably the most hated level in the game. Since this is a run without deaths I can't skip the level (you can by dieing 3 times in a row) so I try to make the most of it by doing abit of dancing around and stocking up on extra lives. I stop messing around after the first cycle of the music (I lost a couple of runs there due to dancing into a rock).

A pure platforming level, there are no enemies in this level. More horrifying is the precense of the genie smoke that has the same kind of physics that the trees of the desert had. The second place in the run where holding jump while falling shows its benefits. This lets me skip the horrible moving hands climb which would otherwise screw you over every so often. Disaster, I jump too high and thus fail skipping a Genie head. This is merely a 4 second loss but still a very annoying loss.

I mess up on the flamingo jump pattern in the beginning costing around half a second. I am not attempting the TAS skip near the end of the second rug ride. Only once have I been able to pull it off on console, it's far too frame perfect to even attempt to incorporate this late in a run. Some more top-notch game engine bugs shows up when I land after the second rug ride: You are unable to swing your sword for some reason and the only way to reset that seems to be jumping or throwing an apple. Jumping over the second Jago is more than just show, it skips a Genie head. Exiting this level can be a menace. Sometimes being in invincibility blinks after taking a hit makes you walk right through the end level trigger costing you several precious seconds. The apples prevail once more, taking down yet another boss in a blink or two or three really long ones.

The last level, and usually where an abundance of random mistakes decides to show up. I start off this level by messing up a stop-run later followed by a mistimed jump near the pillar before the spikes. Perfectly timed swings can get you through a few of the swinging balls at the bottom of the stage without taking damage, but in reality that never happens. Remember, getting hit while in the air will most likely stop you completely and you'll drop down into the pit (which for some reason is an instant death pit here, not a spike mat). There's nothing to worry about for the last stretches, except random damage (curse you, stupid animation system). My initial apple missed Jafar by an inch, boo. Oh well, only 0.2 seconds lost. Once again, apples to the rescue!

Runs ended due to falling off a tree in the desert level: 29
Number of times falling through objects supposed to be physical: 6
Hours of recording: 31
Deaths: 24
Deaths caused by playing around during the Rug Ride level: 3
Really good run attempts botched in Jafar's Palace: 5