Donkey Kong Country 2 came just one year after the first. The game is much more challenging and the star is now Diddy Kong, Donkey Kong's sidekick from the first game. Diddy goes on a quest with the latest kong character, Dixie Kong, to rescue the kidnapped Donkey Kong. The game was rereleased for Game Boy Advance in November 2004 with an extra boss, more DK coins and an uglier world map. 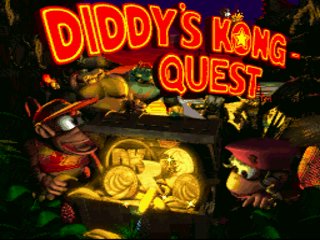 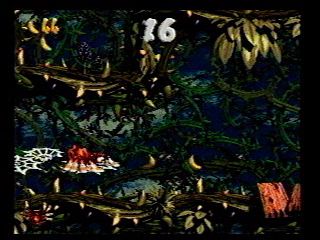 Note: The game calls the 100% completion 102%. 'Hard mode' is the result of using the code which removes DK and continue barrels.

Runs on the GBA version: Return to the Game List, the FAQ, or the Home Page.

By memory I died once, in mudhole marsh [Marais Marrant] and make some time losses here and there. In Rambi Rumble Rambi Chambarde, making the rush trick is possible and I don't do it in my video. Because of that, I think that 1:30 is possible. I saved my game at different points so it's useful to localize yourself during your eventual game of DKC2. Here some tips for the ones who wants to run that game.

-Choose you character : Remember that Diddy climbs faster than Dixie (Chain Link Chamber [Sallon du Maillon]) and the throwing techniques are different for the two monkeys: Diddy throws faster but Dixie is protected when she's below the enemy (see my selection in Kleever's Kiln [Fournil de Kleever]). The flying technique of Dixie is also a big factor to make a good time (for example, in Jungle Jinx [Jungle ensorcelée], in Krockhead Klamber [Crapahute des Croqueurs] and Gusty Glade [Fatale Rafale]). Personally, I think that Diddy runs faster than his girlfriend. In water, I favor Diddy and in Windy Well [Gouffre Glacial], Dixie looks smaller to me. Use the character you're the most at ease with in the different levels.

-The sacrifice: Sacrifying a character can save a lot of time. See it in my video in levels like Squawks's Shaft [Perchoir de Squawk], Bramble Scramble [Embrouillamini-Joli] and Parrot Chute Panic [Perroquet Paniqué].

-The warps: Warps are presents in the two first world of the game. See how it's useful, particularly in Gangplank Galley [Passerelle de la galère] and Red-Hot Ride [Traversée Embrasée].

I'm really proud of some tricks I succeed, like the falling down with Dixie's spin in Kannon's Complain [Complainte de Kannon] and my team-up trick in Castle Crush [Bastion Broyeur].

Thanks to SnapDragon, his video helps me in my achievment. For example for the trick in Barrel Bayou Bayou du Baril and the sacrifice in Windy Well [Gouffre Glacial] (the line of three Zingers).

Greetings all to my first pathetic attempt at a Speed Run. The game? Donkey Kong Country 2. The system, my GBA. DKC2 is really one of the better Kong games, that isn't too simple (DKC) or too gimmicky (DKC3... ugh). My motivations behind the run?

It's a fun game, and it's still one of my favorite games after all these years, but Rare really ruined the port with their incessent need to tinker with things. It's still fun, and it's great for that DKC fix you need from time to time, but it hardly compares to the original. The new mini games, whatever. The new mini-map, fine. But they had to tinker with all sorts of minor things. There's tons of shortcuts like in the second level of the game that are removed. The barrels have been tweaked (Especially the Blast Barrels in Barrel Bayou), the collision detection now registers a hit when you're in mid air, and you hit any part of the top half of their body (Refer to the Klobber in the first level, you can't do what I did on the SNES version), and, god forbid, they added "Kerozine."

Anyways, this run is an any % run under "Hard" mode. Ignoring the idiotcy on the menu screen, I put in the "Rockard" code. What this code does is remove all DK barrels and midpoint barrels. That means I can only have two folleys in a level, and I'm done.

((Note: If you wish to respect my skills, just skip the first two worlds. Really. You will lost all respect for me in the first 5 minutes of the video, easily. Also, it is 2:45 AM upon writing this. Bear with my spelling, grammar, and generally ranting.))

Gangplank Galleon: It's only when you start recording when all of these completely random factors start showing up. In 1-1, Rambi snags a barrel costing me a few seconds. And 1-4, woo. Usually, I hug the right wall when falling, hit the secret little ledge, and cartwheel jump into the barrel. You can't toss the monkeys up there, so either you hit it, or you continue on, trigger the water rise, and swim back. I missed, and on my way hit the barrel, picking it up, and then THROWING it rather than plowing into the Kremling. Lost lots of time there.

Krow: I deliberately allowed Diddy to get hit to switch him out with Dixie. I'm lazy like that. Expect to see that lame gimmick another dozen times before this run's up.

Crocodile Cauldron: Nothing much here. Red-Hot Ride has a warp barrel that I haven't seen in the SNES version, and when battling Kleever, I don't jump up to hit him, because it almost always sends me into the water if I jump into him. Upon further thought, I realized just now upon writing this commentary I could have thrown the cannonball up into him...

Krem Quay: Let the near death experiences begin! Count the times where I almost fall to my death. Lots of fun there. The Krusha battle went well enough though. Just watch this part, and laugh at my spastic mad skills. I think Rattly Battle was a little poor though, but then again, controlling that guy is a PAIN. Thankfully, he only shows up twice in this run.

Krazy Kremland: Bramble Scramble went well, as did Mudhole Marsh. Now, I'm not sure how it is in the SNES version, but in the GBA version, you can get a solid time going through Rickety Race by jumping before you hit the dips, jumping up into hills, things like that. I did mess up on one jump and knicked the car ahead of me slowing me down, but this level is single handedly the one that ended the majority of my runs. Damn level. I'm content that I lived.

The King Zing Sting battle went FANTASTIC, although I wish I was able to hit him when he was ascending and shave more time. There's an interesting glitch, where if you managed to hit King Zing into the wall on the final hit before he shrinks, he only summons one bee that you have to dispatch. Woot.

Gloomy Gultch: Behold, as I, Psychochild, abuse Dixie's helicopter spins to a new extreme. I was INCREDIBLY pleased with Parrot Chute Panic. A small note: Parrot-Chute panic features extreme slowdown which I will chaulk up to hardware limitations. Doesn't make this level much easier though.

Web Woods, I was more cautious than I normally am (Mostly because I forgot what the entire game after Rickety Race looked like. Go figure)), because the new game physics allows you to sprint through your platform jumps, since Squitter's webs seem to go at different speeds depending on if you're running, jumping and running, walking, etc. (Where as in the SNES version, it was the same constant speed).

Kreepy Krow, I think I got stuck behind him when trying to beat him with his infernal egg as Diddy, and lost him earlier as I had hoped. Otherwise, I would have been showing off on the last batch of vultures, just going back and forth.... Mostly because I have a sick need to be noticed. I'm such an attention whore.

K.Rool's Keep:Nothing special. I tried this shortcut in Castle Crush that should have saved me some time (Or merely just averaged out to be the same, but I rather not have you sitting there for 10 seconds watching me do nothing). I also skip getting Rambi because it costs me about 5 seconds to get him, and he's hardly nessecary.

This world is the most dull of the bunch easily. Windy Well, another one I hate. It's pretty straightforward outside of finding the specific places to trigger the gusts. At this time, my mind was filled with a million voices going "Woot!" This was the run, I knew it.

Chain Link Chamber came out well. Behold, Snapdragon, as I can move horizontally AND vertically on the chains at the same time. I call it "Diag-a-ni-al" movement. Take that, SNES version!

Toxic Tower is a fun level with Squawks because the physics are completely wrong. Rather than drifting downward like normal, he kind of floats up in general. I don't recall if it was like that before the port, but this level just feels weird, or something. They were kind enough to ruin the Rattly shortcut where I could spring up as well. Bums.

Stronghold Showdown: Children are fleeing in terror, the dog is hiding under the couch in fear! Look out world, it's "Kerozine" the giant Kremling!

My friend, who was watching me do this fight on a practice run sums it up nicely. "What the ****!"

The crappiness of this boss, you have to see to believe. I'll let the fight speak for itself though, as I honestly don't remember it. I assume I won though.

Screech's Sprint, several changes. The most noticable one, is that they either removed or relocated the second blast battle during the player's ascent from the first one. I spent a good four minutes looking for it my first time through before giving up. I did get a little forgetful near the end, where I started killing all the bees, rather than plowing through.

I remember going into this fight "Oh man, I can't believe I did it! I got to K.Rool! Oh man, I'm gonna do this right, all Diddy action!"

Then I got Diddy's face shot in with a spiked cannonball because I didn't feel like jumping over it during, I think it was, K.Rool's second round.

Either which way, enjoy the new ending, which is hardly as good as the original's, and feel slightly bittered just how much Rare sodomized their own great game like that.