Released by Nintendo in 2005, Donkey Kong Jungle Beat is one of the very few games released to use the Gamecube's Bongo controller. Outside the odd method of control, Jungle Beat is a pretty standard platformer in line with the other 2-D titles featuring Donkey Kong, but the bongos add a twist to the traditional gameplay. 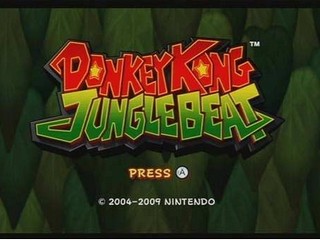 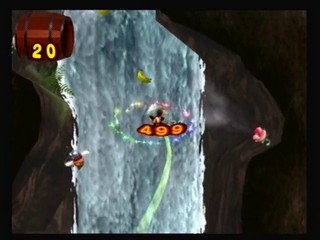 Any% in this game might not be exactly what you would expect. Even an any% run can't just rush through every level in the game. To unlock the final boss of the game, you need to have 51 crests, which works out to, on average, 3 per Kingdom. However, some Kingdoms are not too much slower to get an extra crest, and some save a lot of time by missing a crest, so I opt to get 5 platinum crests, which lets me get 5 silver crests.

A new glitch has been found recently in this game, known as Infinite Wall Clap (will be referred to as IWC). This glitch is why, at the beginning of Banana Kingdom, I set my clap sensor down to the most sensitive. To do the glitch, while you're sliding up a wall, you need to clap on every single frame. This will lock you in the "sliding up the wall" animation, and, for some reason, when you edgehop off of a corner, you have a tremendous amount of backward speed, the exact speed is determined by how long you have been sliding up the wall. This trick is also used on vines, to make them swing back and forth very quickly, although it's very situational. Clapping every frame is done by blowing into the microphone. This is why I need to have the sensitivity down so low; if it was any higher, the microphone would filter out the sound too quickly for it to be useful.

There is a better setup for that IWC, but it's MUCH harder. This one is hard enough as it is. There was a little mistake on the mushrooms, but nothing too bad.

This one is really straightforward. Nothing really went wrong here.

The Monkey Fest Skip probably saves around 10 seconds over the safer route. Knocking extra coconuts out of the boss does more and more damage for each coconut that you hit at him (10, then 20, then 50). A 2-cycle is not too hard if you hit three out of him.

Getting a lot of points in this Kingdom requires going pretty far out of the way, so getting a silver crest saves a lot of time over gold.

There are a LOT of points right at the end, so you don't need to go that far out of the way to get a gold on this Kingdom.

Not much to say here, except based on how the pattern for Orca works, if you miss a cycle, you lose about 5 seconds, so, it's good that I just barely made it at the end of that cycle.

I actually intended on getting a platinum crest on this Kingdom, but I accidentally landed in the middle of the combo, so I had to take a risky strat against the miniboss to preserve my combo. That didn't work out, so I only got a gold crest here. I made it up on Cactus King, on which I usually only get a gold crest.

Here, we see a more subtle use of IWC. It's used to slide up the wall, but I don't care so much about the speed I get from edgehopping. Because of this skip, it's best to get silver on this Kingdom.

I had a little trouble getting the combo up for the part in the water, but that wasn't too bad. Skipping a coconut tree pig is always good-the less RNG to deal with, the better. I believe there is a way to manipulate the devil panda at the end of the level into a faster pattern, but it's only happened to me once or twice, I have no idea how to do it consistently.

Pretty straightforward level. This one's really easy to get enough points on.

Another straightforward one. It's easy to get a lot of points on the autoscroller, so this is a great level to get a platinum on. For some reason, this Hog boss stays stunned a lot longer than the other ones, so it's easily possible to 2-cycle him with only 1 coconut per cycle.

There's a couple cool uses of IWC in Battle for Storm Hill, in making the rope swing up really fast, and the edgehop near the end of the level. There's also a neat little trick in Aerie Fortress, where you can grab the black pig through the ground, skipping the one on the right. Ninja Kong is one of my favorite bosses, I love all the back-and-forth in that fight :P

As I said in Lemon Kingdom, I usually get just a gold on this, but I needed an extra crest. This Kingdom seemed like the best place to get it, as all that needed to be done was to kill those Ninjapes.

This Kingdom has probably the coolest-looking IWC in the game. You can clip through the wall, and do the entire race out of bounds. The timing for the clip is very tight, there's a 4-frame window for when you have to stop clapping/blowing. This wouldn't seem that bad, but, let's not forget, we're not letting go of a button, we're stopping blowing into a microphone. That's why this clip takes a couple tries to get. Comparing the race time gotten here, to an average race time, this clip can save a maximum of 20 seconds, although it didn't save quite that much here.

This one's also pretty straightforward. Because of how the Helibirds control, it actually is faster to drop, and run to the next one in a couple parts.

Without a doubt, this is by far the hardest boss in the game. Generally, this boss fight either goes perfectly, or horribly wrong. This fight didn't quite go perfectly, but, it wasn't that terrible, either.

Took me 2 tries to get the Asteroid Skip, but, that's a tough skip. You need to be sliding up the wall a very specific distance (because, for some reason, sliding up a wall gives DK more height...)

Not much to say about the final boss. It's not too hard of a fight. See how many differences you can spot between this and the Cactus King fight :P

In Banana Kingdom, I change the clap sensor to be more sensitive. Without doing that, IWC is impossible. IWC is a glitch that is done by clapping every single frame when you are sliding up a wall, or swinging on a vine. On a wall, you will slowly slide up the wall, and when you reach the top, you will be sent backwards very fast. Notable examples of this can be seen in Durian Kingdom and Pear Kingdom. When done on a vine, you will turn 180° and start swinging in that direction very fast. This can be seen in Strawberry Kingdom, Chili Pepper Kingdom, and Vs. Ghastly King. In real-time, setting it up costs 6 seconds, but as this run is timed by ingame time, there is no time loss for doing so.

This run, overall, is very good, the only mistakes are missing the clip in Pear Kingdom twice, and messing up that miniboss in Chili Pepper Kingdom. I'd estimate that these two mistakes add up to around 27 seconds of possible improvement.

About the levels specifically, there isn't too much to be said that wasn't already said in my comments for the IL run. Some changes in the route, some optimizations I hadn't thought of at the time, and of course IWC, make this run actually about a minute and a half faster than the IL run!