Nintendo released this god game for a very short-lived peripheral called the N64DD that alleviated data storage limitations and generally widened the horizons of the mother console. Of the only 10 games released for it, Doshin the Giant represents something a little bit out of the norm: as the Love Giant Doshin, and the Hate Giant Jashin, you ply your will on little sim villagers harboring demands such as reshaping the land (how about you just build it a little bit further that way, you little nincompoop?), providing flowers (what you a hippy?) and leaving their young un-stomped-on (no). 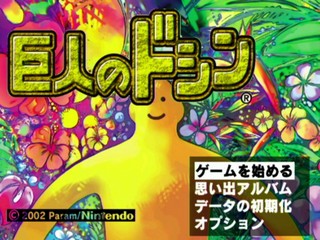 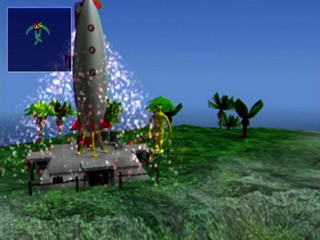 The goal of the game is to build 16 monuments, 15 from the permutations of 4 colors and a final monument that can only be completed after these 15 have been built and by destroying the RGBY monument By destroying monuments after they are built and getting rid of unwanted villager colors you can complete the 16 monuments with the 4 starting villages, Red (R), Green (G), Blue (B), and Yellow (Y).

After a monument is built you can destroy it as Doshin by repeatedly dropping the Hairpin Spawn on it or grabbing the monument if you are big enough. I do this because there is far less damage to the area with this strat and prevent villagers from getting distracted from repairs and giving you skulls which make you grow too big. This is the recommended method of monument destruction in all villages besides Y.

You can also destroy a monument with Jashinfs fireballs, NOT his ground slaps. Ground slaps cause too much damage to villagers and buildings.

To add a village color, carry over a villager of a new color and drop him in the town square. Do this before the monument is destroyed or else they will not accept the new villager. You may need more than one new villager. You can remove a village color by either killing all villagers of that color or giving them to another village. You sometimes have to wander and wait a minute for the color change to appear.

You can store villagers you will need in the future on a small island you make anywhere away from other villagers. This is handy for Y villagers as the travel time to Y takes a while.

Do as much as you can before the fourth day. Natural disasters start spawning on the dawn of the fourth day and can destroy a village. Counter with landscape changes and Jashin's jumping and fireballs.

The only time the villagers should see you as Jashin is when you are destroying a monument or stopping a natural disaster. If they become angry they will give skulls and make you grow big too quickly as well as make hate monuments which are harder to destroy.
?
Always have a flower near a town center of a village close to starting construction on a monument unless there are two monuments ready to be built and one of them is in Y village. If a monument has started to be built and there is no flower it, stop what you are doing and provide a flower. If a monument is halfway completed without a flowerCit will turn into a poop monument and getting rid of this takes a long time.
?
Prepare flowers by placing 5 trees together near each village. When a flower is needed, place an additional 2 trees next to previously placed trees. The 7 trees will die and 8 new trees and a flower will spawn.

If you need to pause a monument under construction, place a tree in the center of a town square. This doesnft always work though.

Expect to step on villagers because they get in the way a lot, but make sure to get rid of their lonely flowers left behind after they die. They spawn trees in the morning which sometimes in the way of constriction.

If you have any free time, check on your villages to see if they want anything. If they are in the middle of a project or in need of help from Doshin, they will not build a monument.

Spend as much time as possible in the area between R, G, and B. Being in sight of monument as ifs being built speeds up its construction by a large amount.

Sometimes construction on buildings gets stuck in limbo. Destroy the building so the villagers start work on another one.

Ignore what the villagers tell you in terms of changing elevation. Just make the land level with X and Y and theyfll stop nagging you.

Plan your landscaping projects for late in the day for when you're big. When you reach a certain size, you can level by pressing X+Y.

Days last approximately 30 minutes. On the dawn of each day, villagers usually build additional projects before them start work on monuments; because of this, start monuments before the sun goes down. Beware though, because if a monument completes during the night, it wonft register as being finished by the monument list.

Jump with Jashin whenever you get the chance. Itfs 4 times faster than walking at smallest size and gets even faster as you grow.

Nothing goes as planned in this game and half the mechanics donft even work, but you can be prepared for when the game inevitably screws you over.

Ifm not going to delve into detail about what happened in this run because I think a lot of Doshinfs charm is from not understanding what the hell is going on. Everything was executed well with phenomenal RNG until Day 3, at which point Yellow Monument completed but didnft register. I had to spend a lot of the day recovering Yellow Village and killed time while I was waiting for the Tower of Babel and Rocket to build (losing me about 4 minutes).