The first of the four part series was released in February 2003. In the future, an epidemic is taking place. People who are playing the most popular game on the internet called "The World" are mysteriously falling into comas in the real world. You are Kite, a newbie to The World who is invited to play by your friend Yasuhiko (Orca in the game). You only just finish learning the basics when a monster appears that can not be harmed. It attacks Orca, and the next day you find out Yasuhiko is in a coma. Just what was that monster, how can Yasuhiko be brought out of the coma, and what is it that spared you from a similar fate? 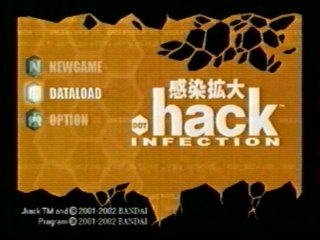 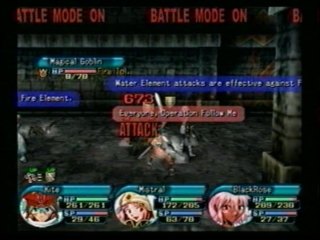 This is probably the first time I've ever seriously sped through a game. Usually I'm horrendously slow, taking my time on everything; how else would I rack up 60 hours on Infection alone? To chop that down to 2 and a half is something else. I guess the first thing I should do is thank Brightstar for his run. Had I not watched it, I wouldn't have gotten the idea to run Infection myself, nor would I have known how to get that kind of speed or what to improve upon, etc.

At any rate, a lot of the extra speed in this run came from new level-up fields and a bit of luck. The massive Virus Core A and B gathering over two segments, for example, really did come one after the other, no retakes involved, almost completely eliminating what I think is the biggest headache of running Infection. The monsters I faced levelling up were only physically strong, making the battles nice and one-sided despite hideously low levels so long as I kept them at a distance. The final segment had a couple practice runs, but amazingly the one time I taped it, I had all the luck in the world. The monster encounters lacked the trouble I had on the practice runs, and I was able to get better weapons for BlackRose and Piros, speeding up the final battle. About the only thing I really question is whether it was worth the 5 and a half minutes to grab the Kagayuzen at all, but I'd have to rerun the game to be certain its magical attack and defense didn't make enough of an impact. I know giving Piros the Axe Bomber was a waste of time seeing as how I already gave him the Master's Axe, but my good fortune outweighed the small mistakes in the final segment.

The other little things I changed up had to do with gathering the right skills. I took Mistral's Sotetsu instead of the Raitei from Koji because aside from elementals, the Sotetsu is almost statistically identical to the Raitei and Tiger Claws is 20 SP less expensive than Thunder Coil (plus equipment level has no bearing on combat anyway, so the Raitei being two levels higher doesn't make it automatically better). Magic-wise, I had to trade for the Smith's Gloves before Expansive Haunted Sea of Sand so I could unequip and transform the Leather Gloves into the Wrist Band; these gave me Juk Rom and Vak Don. Vak Don helped out really well versus Arrow Fish on the first level up field and Juk Rom was useful throughout the game for its area effect. The main reason behind Juk Rom, however, was preperation for tackling Mu Guardians at the end of the game. I only "downgraded" the Smith's Gloves to the Fire Bracer because I didn't want to waste SP in the final dungeon on a single missed hit, but in hindsight I don't think it made that big a difference. I needed to Data Drain an Anshou from a Metal Goblin on the second level-up field. The Goil Menhirs can be a bigger menace than Mu Guardians in Chosen Hopeless Nothingness not only because of Rip Maen, but also for their Magical Evade, forcing you into physical encounters. The Anshou's Swirling Dark combined with its +15 Darkness boost makes short work of them, and thankfully they only appeared twice on the run so the cost was affordable. Aside from all that, I also employed what I've called the Quick Hit bug. If you move during a normal left hand strike, Kite will cancel out of the animation and can strike again immediately, saving just less than a second between blows if you do it right. I dunno how much time I saved doing this, maybe a minute or so if I was lucky. It is possible to cancel out before doing any damage, so you have to be a little careful.

I enjoyed finally putting those hundreds of hours of .hack to the test, and aside from nitpicking, I'm rather pleased with how this turned out. Maybe I'll do this speed run thing again someday.

...oh, almost forgot; ignore the fact I always waste all of my GP anytime I'm at a shop. I have no idea why I did that other than to max out supplies, but that was a stupid reason because I should have saved up for Skeith. Oh well.