Double Dragon II was released in 1990 for the NES. The Double Dragons, Billy and Jimmy Lee, are back to avenge the loss of Marion. The twins fight the ultimate battle between good and evil. A battle where not only their lives are at stake, but the fate of the entire world! 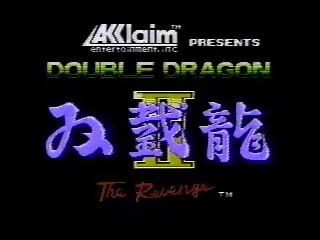 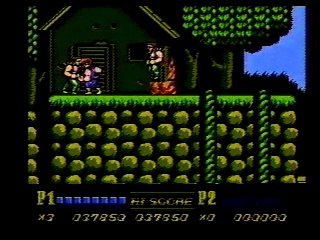 Thanks to the SDA crew for this great site.

This run is the product of what I first thought was a cruel twist of fate. After my 12:01 deaths run was approved I wanted to make a no deaths run and was planning to submit once I got around 12:15 or less. The idea was to have both deathless and deaths runs up simultaneously. My first good no deaths time was 12:01 which just so happens to be EXACTLY the same time as my previous deaths run. This presented a problem because Mike Uyama informed me that the deaths run will be obsoleted.

At first I was annoyed at how I could randomly get the exact same freakin time (which has never even happened until now). I mean how could it not have been a few seconds faster for sub 12:00 or a few seconds slower to be a nice complement to my 12:01? After my initial annoyance and disgust subsided, it hit me. I realized the beautiful truth...this was a sign that my work on this game was not done. Sub 12:00 had to be achieved and I knew I could do it. I actually developed a few new strategies for this run some of which you will get to see. Others will just be described in the comments since I did not execute them correctly.

I am pretty pleased with this run and all told I managed to save 39 seconds. Most of my mistakes were not too costly and I did execute pretty well in some spots. The best part for me about this run time is that I actually completed the entire game faster than the original 1 player TAS done by Fobbi on Intermediate difficulty in 11:22 (timing ends with final hit). I think 11:0x is definitely possible but I am not going to be running this game anytime soon. If someone comes along and beats my time I will return and go for sub 11:00 which is the Holy Grail for this game but requires the mission 6 glitch to be performed or near perfect execution in all 9 missions.

Thanks to the SDA crew for keeping this awesome site going. Special thanks to Mike Uyama and David Heidman who picked up this game for the AGDQ 2012 marathon and participated in the 2p race. If they had not gotten involved I doubt that jprophet22 and myself would have practiced nearly as much. Because of all that practice we found ourselves playing extremely well and pushing the time lower and lower.

****TLDR; HISTORY OF THIS RUN, SKIP TO MISSION 1 FOR LEVEL BY LEVEL COMMENTS****
This all started when jprophet22 moved back to his home state of Maryland, making it easy for us to do attempts. Our original goal was to get the sub 12 we were unable to the first go round. It took a surprising amount of attempts for us to even get sub 13 and for a while we though we were not going to even beat our original run. Regular practice finally paid off and we got an 12:07 which was a small improvemnt over our original 12:13 run. Sub 12 was still the goal so we pressed on and it was not long before we crushed that time with an 11:46. Submission was considered at this point, but fortunately we had missed the Mission 6 skip which is pretty much unacceptable so we had to press on. 11:3x became the new goal and was met. The run still didn't look quite right so lower we went. Finally an 11:23 seemed to be a sure winner but I realized that the two player run would obsolete the one player run if we shaved off a few more seconds. I don't think either of us were expecting the 11:08 which this finally became. But as with the previous runs we kept feeling that there were enough mistakes to warrant improvement. Of course at this point the run is super optimized and would just result in a ton of resets early on to get a perfect first four missions in order to keep going. We actually lost the most time in 1, 3, 7, and 9. No time could be gained in 2 and 6, while extremely minimal gains are possible albeit unlikely in 4, 5, and 8.

Mission 1 - Into the Turf (1:20)
This mission had a few small upgrades strategically, most notably using the whip to kill the 2nd set of Lindas on the 2nd floor. This has to be one of the strangest Mission 1's we have ever had because so many weird things happened but we improvised beautifully and managed to save 3 seconds over the original run. The 2nd set of Williams on floor 2 hit Billy which never happens unless one of them jump kicks, or timing is way off. This oddity led to Billy being further behind on the ladder which causes the Ropers on the catwalk to spawn together. Lucky we have played this game enough to know that and jprophet makes the strat adjust to kill them both at the same time and go first up to the rooftop. We rarely had success with Jimmy going first on the rooftop but somehow things played out just well enough for us. This was actually rather below average for Mission 1 at this point in time and we would usually get in the 1:16 - 1:19 range, but we pressed on anyway.

Mission 2 - The Heliport (1:09)
An additional death abuse gains a couple of seconds. The other minor strat upgrade comes from having Billy jump before being knee'd to get some extra distance and save another half second. The execution in this mission was pretty good and the RNG did not behave too unfavorably. Billy misses a knee on his ninja but this does not really cost much time because it take Jimmy longer to kill his ninja no matter what due to how they spawn.

Mission 3 - In the Chopper (0:29)
A small gain made here due to better execution, although overall the execution was still bad. We had come up with a pretty good strat that would have the 2nd Bolo going out the door when it opened the second time for about a 0:24 time, but it was not to be in this run. At this point we are on an "okay" pace, nothing special, but good enough to keep going. You really cannot lose that much time in the first three missions, so now is where the run really begins.

Mission 4 - Undersea Base (1:34)
The upstairs portion of this mission went flawlessly thanks to improved strats and unusually favorable RNG where none of the Ropers throw a bolo. The downstairs was kinda average but we had developed better strats for the end of the level and it showed (even though Billy missed an uppercut) we even got lucky after botching Bolo, by hitting exactly enough punches that the knee would take him out. Just to show my lack of confidence at this point in the run I did not go along the top of the conveyer belts as usual which is only frames faster than the technique shown here, but I messed that up and cost about 1 second. Overall still happy with this mission as anything in the 1:30's is good.

Mission 5 - Forest of Death (1:39)
Not much in the way of strat upgrades here, just flat out better execution. The true tell of how much better we had gotten at backing each other up when things didn't go as planned was shown here after Billy misses the 1st knee at the top of the train. That could have been a run killer, but Jimmy was on top of his game and saves the day making for an acceptable train, rather than a train wreck :P

Mission 6 - Mansion of Terror (0:48)
This mission goes to show how much execution matters in this game. Time is not lost in small increments when you make a mistake it is in chunks. We have flawless execution and save 5 seconds in a very short level. The only way it gets better is if both players can hit a pixel perfect jump to get to the exit door 5 seconds faster than normal. To attempt in a 1 player run would be madness, and in a 2 player run it would be sheer lunacy.

Mission 7 - Trap Room (2:01)
This mission was pretty much dead even with the previous run except again cleaner execution, most notably on Arnold (Abore) saved a nice 8 second chunk. The strat upgrade that really didn't pay huge divedends due to average execution was to split up at the base so enemies would not go wandering after the other player and we could get easy isolated kills.

Mission 8 - Double Illusion (1:33)
The most time saved in a single mission happened here due to much faster ninja and illusion battles. A monstrous 24 seconds were saved, and it could have been even more with slightly better execution on the final illusion who proved somewhat evasive. The idea of cycloning the ninjas and then kneeing them was much better than the jump-kick kneed strat because it was more consistent and dealt more damage in case one got away. Billy jumping is a manipulation that we discovered which can be used in a few places, most notably here that makes the enemies think one of the Lees is not present and react in a favorable way. The illusions gave good RNG and did not pull any dissapearing acts.

Mission 9 - Final Confrontation (0:35)
This is the only mission in the game in which we actually lost time against the original run, but fortunately it was small amount (3 seconds). The missed knee by Jimmy had been quite costly in a previous attempt when a knee off the ground was also unsuccesful. We devised a contingency plan in case this happened again where in an uppercut followed by a knee would be used because essentially it is actually faster once you have been knocked down to do this since 9 knees, or 8 knees and an uppercut/cyclone kick will do the trick.

It would be nice to push this game to the limit and get just under 11:00, but that is probably not going to happen for these two runners. It would take flat out near perfect execution to achieve such a thing and probably many more attempts. For now this run, a one minute four second improvement, will have to suffice.