Released in 1991 for the NES, Double Dragon III once again requires Bimmy and Jimmy Lee to rescue Marion from the clutches of evil. This time they are aided by the Chinese martial artist Chin Seimei and the Japanese ninja Yagyu Ranzou as optional characters. The Lee brothers are sent across the globe at the behest of the mysterious Hiruko in search of three sacred stones that somehow relate to the damsel in distress. 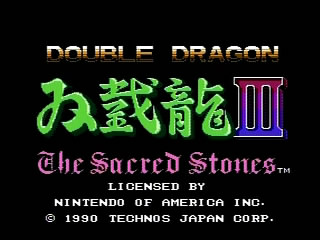 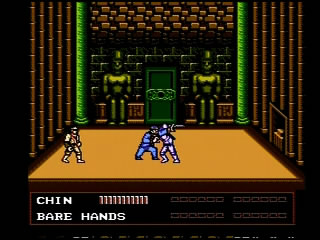 Big thanks to all the SDA crew for maintaining a great site and speedrunning community board. Also, a big thank you to Cremator for giving me advice and encouragement over at #irc every time the game brutalized my morale.

In all honesty, I cannot say how many attempts this run required before I achieved this time since keeping track would have resulted in madness. Over the course of about half a year, I probably poured in hundreds if not over a thousand attempts at this game before I acquired the consistency necessary to even consider submitting. Unfortunately, there are mistakes in this run that are avoidable despite the fact that some of them were due to bad luck and positioning. With that said, I hope others will pick this up and provide some competition. But know this:

My kung-fu is without equal.

* After the dojo, the areas outside in the alley and on the second floor are probably the most random parts of the first stage in terms of enemy behavior. The key is to get a consistent pattern where the enemies come after you in such a way that allows Billy to take them out quickly so that more of them can spawn. The pattern that I got actually is the fastest most likely (and the riskiest) since you have to make sure you don’t trade with their jump kicks and get knocked down. Also, the enemies were cooperative on the second floor so throwing them off went without a hitch.

* The warehouse sequence went pretty well since none of the enemies backed off. There’s no room for improvement really considering the boss fight went perfectly. You can perhaps shave some seconds off this stage but it’d have to be completely perfect and follow the TAS strategy of taking out multiple enemies at the same time which isn’t viable normally.

* The first area by the woods is fairly straightforward. I purposely delay for a second so that none of the initial enemies spawn on my left side which makes it more likely for any of the Bruces to slide kick backwards and waste time. As a matter of fact, they actually slide kicked forward so that was some good luck.

* Billy’s “re-grab” technique is only useful in USA and China so I use it to full effect while I can. Right off the bat, I get bad luck when a Bruce jump kicks off a Williams that spawns off the screen. That leads to my being in the bad position of being between them and being at the right distance where the Williams throws an army knife at my back. This could’ve been avoided if I had just moved down or up a little but the stun would’ve worn off the Bruce anyway most likely. I lose 2-3 secs. right there.

* Inside the cabin, my strategy of spin kicking goes well for the most part. Unfortunately, I eat a bottle to the head from a Longhair as I was right in front of the door when he comes through. Normally I’m able to strike him with a sai before he can nail me but he gets the jump on me this time. Lose another 2-3 secs. again.

* The battle with Chin goes extremely well. He usually ducks at least once or twice against Billy’s nunchucks but I manage to defeat him seamlessly; therefore, I think this stroke of good luck negates one of the mistakes in this level at least. It’s possible to beat him faster (one spin kick faster) by using a kick to nunchuck combination but this is a very risky strategy considering Chin will destroy you at close range. Chin is used predominantly for the remainder of the run because he’s so beastly.

* I make yet another mistake at the beginning outside of the dojo when I fail to time the spin kick correctly and get cut down by a blue ninja. This is probably the worst error in the run imo since it is completely due to mistiming on my part. Lose 2-3 secs. with that knockdown. The rest of this section goes pretty well though.

* Going into the dojo I switch to Billy and follow the TAS strategy of utilizing his nunchuks. It’s possible to dash across the bamboo spikes but it’s very risky and usually results in a lot of lost time. I successfully get the 2 for 1 trick and take down two enemies with my final nunchuck. I switch back to Chin, kick some more ass, and ‘run’ up the ladder. Thanks to Cremator for telling me how to do this trick.

* The last area of the level goes well for the most part. It can be better but I don’t make any mistakes at least. Ranzou gets decimated by Chin’s combinations. There’s no way you can beat him faster than this unless you somehow manage to replicate the TAS strategy of stunning him with a 3-hit combination and then finishing him off. I’ve never been able to pull that off since Ranzou loves to backflip out of danger.

* Instead of fighting the Gladiators right away, I dash across the screen until I get to the ledge where the enemies spawn from in the wall as it’s generally faster and safer. I take a couple hits initially but luckily don’t get knocked down. I don’t really consider it a mistake because of that as my rhythm wasn’t thrown off and my rate matched most of my best times. Once again, I copy the TAS and jump kick off the wall to save time. Thanks to Cremator otra vez for telling me how to pull it off. Get it on the first try too, woot!

* At the beginning of the Colosseum, I eat another bottle yet again. This mistake, however, is mostly due to bad luck since you have no choice but to confront both of those enemies at the same time. Sometimes you can take them both out, other times he’ll get in a cheap shot. All you can do is position yourself, mash, and hope for the best. Lose 2-3 secs. right there.

* Soon after, I somehow manage to get flanked by two enemies and take a spear from a Gladiator and take some heavy damage. This probably could’ve been avoided with better positioning but I didn’t realize that distance would’ve been enough for the Gladiator to start throwing projectiles. Lose another 2-3 secs. This part of the level goes well for the most part though but it could be faster.

* The boss fight goes pretty well since instead of landing 2 hits each time for a knockdown, I opt for the riskier strategy of landing full combinations. It worked.

* Switch out to Ranzou for the quick kills and succeed. This sequence required a lot of practice on the emulator because it’s too easy to fall off and die. The rest of the outside area goes well and I switch back to Ranzou for the interior of the pyramid. I didn’t get the quick kills perfectly but it was still fast though. Using the ninja’s jump slash, I glitch onto the moving ledge and commit suicide at the top to avoid switching characters. Unfortunately, the Gladiator doesn’t run to my left and I have to kick him for a knockdown. I botch a double kick once…hate the clunky controls sometimes. Lose a few secs. due to those errors.

* The next few rooms go pretty well mostly. There was some time lost but it is difficult to get the two rooms before the mummies perfectly. The ninja room can be very tricky so I decide to run to my left so that I get a more consistent pattern (getting flanked here can be brutal). It’s possible to beat these sections more quickly but your positioning has to be perfect and the ninjas must cooperate.

* Ahhh, the mummies. They can be such bastards. One of them only ducks once and I botch a spin kick as well so I lose a few seconds on those occasions. It isn’t as bad as it looks though considering they usually duck 2 or 3 times.

* Princess Noiram aka Marion is easily the most random part of the entire run. She will rip your heart out and feed it to you. Any good run of this game requires a good Marion fight no matter what. The positioning required is very precise and even then her ground flame attack is spontaneous and can stuff your attacks even if you anticipate it. Of course I take a couple of those attacks but it really can’t be helped. Getting a no damage Marion battle is nearly impossible. You just have to avoid her telekinesis attack which is a run killer and hope that she limits her flight animations as well as teleports. She teleports a couple times and flies away as well but it was kept to a minimum at least. I usually try and land 3 punch combinations with Chin cleanly before switching out to Billy (not counting any jump kicks). There were times where I do this and get greedy for more but Marion would promptly ruin the run by going on a teleportation spree. For that reason, I decided to utilize Billy’s nunchuks for consistency as the timing for kicking and stunning her is much more lenient as Marion is prone to teleport away after landing a single strike with Chin. Luckily, when I switch out to Billy, I manage to get her in a nice loop in the lower right corner and she never flies or teleports away. Billy disposes of her quickly and finishes her with a left hook to the temple. Beautiful.

The final time clocks in at around 14:12 but it’s probably closer to 14:11, I’m not sure. I have to say I am satisfied with this run after so many improvements and repeated attempts. It is not perfect by a long shot but it’s pretty fast and very difficult to beat considering all the boss fights went extremely well. The only areas of improvement are cleaning up the mistakes, getting faster quick kills in the interior of the pyramid, polishing up a few sections, and defeating Marion faster which is really hard to do. That may sound like a lot of room of improvement but this game is fickle: something always goes wrong. There’s also the disappearing bottle glitch which kills enemies in a single blow but the timing is strict so it’s not really viable in most runs even though I’ve been able to pull it off like 4 or 5 times. Getting a sub 14 min. time is definitely possible with perfect execution and good luck on Marion. This is definitely an achievement I hope to accomplish some day but I doubt it’ll happen any time soon. Thanks for watching!