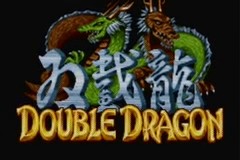 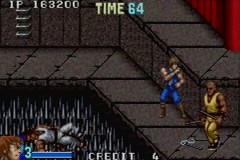 This game is basically a remake of the first arcade game, but cleaned up a lot and with a bunch of added features and levels. The game has a really cool movelist with a lot of flexibility in your attacks, but thats mostly overlooked in this run since Super Uppercut combo'd into Flying Knee does huge amounts of damage, although a few random things do sneak there way in when enemies have fairly specific health totals.

A lot of 'routing' this game is just having a feel for how the AI is going to react to your actions and adjusting on the fly to make them do stupid things. That said, the AI is extremely random in determining its actions, so backup plans are key. The other major thing in routing is knowing exactly how much health various enemies have in order to finish them as efficiently as possible. Going for the maximum possible damage isn't the best idea if a simple headbutt will finish an enemy off, and that is pushed further by the fact that enemies won't die until they've been knocked down, even if they are at 0 health.

While a lot of moves get used in extremely random locations through the run, here's a short list of the most useful attacks:

Standing Kick - 8 Damage and stuns. Useful to round out the very common 40 health spawns or to go into throw combos for bigger targets.

Reverse Elbow - 6 Damage, knocks enemies down (facedown). Mainly used to give myself time to responition against enemies who select a side I don't want them to be on. The hitbox on this move is crazy, and the AI doesn't really know what to do if you just keep doing the move as they stand, but the low damage means that would be really, really slow.

Headbutt - 10 Damage, knocks enemies down (faceup), can juggle enemies who are falling faceup. Great finisher for enemies at low health or a slightly faster alternative to a Flying Knee in a combo, and also fantastic for shoving enemies into hazards.

Dashing Spin Kick - 10 Damage, knocks enemies down (faceup). Great hitbox, especially on the depth axis, makes it a safe move to use in a lot of situtions, and pushes enemies far enough to knock them into hazards. Mainly useful in round 4 where the extra depth axis coverage is needed over the headbutt to knock enemies off the truck, and running off the edge is not a risk.

Super Uppercut - 16 Damage, launches enemies (faceup). Big damage, good hitbox, moves forward, and executes out of a crouch that can be used to dodge attacks. It has some issues with hitting enemies who are stacked directly on top of each other sometimes. The bigger problem is that it is done out of a crouch, and a crouch has the same input as the stomp attack done to enemies on the ground. Since the stomp is context sensitive, I cannot execute a crouch nearby an enemie who is prone, which is why I often have to hesitate instead of going straight to attacking.

Flying Knee - 18 Damage, launches enemies (faceup). Juggles enemies who are falling faceup, the trademark double dragon 2 maneuver returns to destroy everything. Super uppercut combo'd into this move is a fast, highly damaging combo, and it sees a lot of use here. It should be noted that enemies who strike a wall after a juggle will always fall facedown, which is an unjuggleable state, which is why I don't attempt to bounce them.

Dive Kick - 8 Damage, knocks enemies down (facedown). A useful alternative to headbutt in some situations since enemies cannot duck this move.

Hair Pull - No damage, done automatically on stunned enemies who are very close. Leads into Knee Bashes and Shoulder Toss, as well as a couple other moves I do not use.

Shoulder Toss - 12 Damage, throws enemies (faceup). Has some invulnerability frames during the toss, but mostly this is a way of repositioning enemies. It should be noted that while the thrown enemies body can strike other foes, it only does damage to the one actually tossed.

Knee Bashes - 7, then 7, then 10 Damage, launches enemies (faceup). Each knee is done individually, and other throw attacks are available after each. The final knee launches into just the right position for a flying knee, which makes this a slightly more damaging combo for a few bosses and larger enemies to prevent having to wait for them to stand up again.

Stomp - Prone enemies only, 6 damage. A nice way to add a bit of damage here and again, but causes some problems due to overlapping inputs. Killing an enemy with this move skips their post-death animation, if any.

Mounted punches - Prone, faceup enemies only, 4 damage. Stomp into mounted punches can add a decent chunk to an already almost dead enemy. Enemies will break out of the punches after 0-3 strikes depending on how much health they have left. Killing an enemy with this move skips their post-death animation, if any.

Anyways, a breakdown of each stage and my approaches.

Mission 1: Nothing too fancy here. Knowing which enemies have how much health lets me optimize combos easily. I stop and kill the lone roper before the 3rd wave because it prevents the boss from spawning off-screen to the right, and instead he ends up in a position where I can attack him more immediately. When the boss Abobo dies, he takes all his minions on screen with him, so I mainly want to focus on him, but I do need to make sure I've spawned the last of them. That said, I do clear out a lot of the minions to prevent them from getting in the way.

Mission 2: First two fights are pretty straightforward, although I did have an issue with the gamecube controller deciding that I ran on a single input. The third fight I abuse the conveyor a bit on the higher health enemies, and abuse the fact that most waves are triggered when there is still one enemy from the previous left. The Burnov fight I do in a very specific way because of an odd bug. Burnov has 150 health, and the first time he dies, he restores his health after a long animation. However, since this animation is his death animation, killing him with an on-the-ground attack skips the whole process and ends the stage. Killing Burnov also kills any of the Lindas who are still alive, but not the Steves, which is why I make sure to finish them off.

Mission 3: Still mostly straightforward, a few of the enemies here start to have a lot more health and so can't be killed with a single combo. The bosses, the Dragon Twins, are somewhat odd in that they have seperately tracked HP values of 120 each, when either dies they take all the enemies on screen with them, including the other twin.

Mission 4: The truck stage is magnificent. This is the stage that introduces pits effectively, and because of how good the spin kick is, many enemies can be knocked off in one attack, instantly killing them. The last wave on the truck manages to avoid this, but considering the rest went quickly it is not a big concern. The boss, Kikucho, can be a nuicance since sometimes he'll decide to walk off screen to the left, and his minions tend to get in the way a lot, but it went just fine this time.

Mission 5: Here we are introduced to the axe, which is a really mediocre weapon (12 damage per swing), until you realize you can throw it for a massive 50 damage. There's also a lot of pits and water around, which are fantastic for shortening up fights with high HP enemies. The generic enemies also start having more health around this stage (Williams and Roper go up to 50, which is out of standard uppercut to flying knee combo range), so the new methods help more than ever. I get some pretty extreme luck in this run here, including getting an enemy to kill another with an axe throw (although I took that hit as well), getting multiple enemies to just jump into a pit completely of their own accord, and actually hitting an enemy with the jumping dynamite glitch. I also have at least two input mishaps, one that ends with me jumping into the lake and another where I just completely fail to attack a Burnov. The boss Abobo here doesn't take out his minions like many previous stages, so I have to finish everyone off. I also have to be careful because the final cliff doesn't always kill enemies correctly if I send them off with flying knees (resulting in a softlock), so I stick to the headbutt for the most part.

Mission 6: There's water everywhere and I love it. The enemies are normally not anywhere near this cooperative, so it's hard to be anything but amazed by this result. There's not a single enemy in this stage that I have to kill with damage, even in the waves upon waves of rainbow colored Abobo's.

Mission 7: The lake has been replaced by spike pits. Again, the AI normally spends a lot longer just walking around in areas I can't attack them realistically, so this is nothing short of amazing. This stage is also great since it keeps track of the pits off-screen, allowing me to kill many enemies with pits that I otherwise would have to trudge through their health or rely on enemy dynamite throws. The bosses go pretty well, and only escape from being looped a handfull of times. Raymond costs me some time by jumping so I can't do the normal combo to him, but because of his exact health total it worked out alright (the final combo would have been almost his exact health total if I hadn't accidentally gotten the proximity throw).

Mission 8: The spears are complete BS. Its possible to run under them but it requires stupid luck. I end up just jumping into a pit past the first after getting denied, then damage boosting through the second and then using them to stab all the random enemies. The rest of this stage is mostly straightforward fights since there are no more accessible pits. I try to abuse the two ropers who have dynamite, but manipulating all the enemies into the explosives and not just having them pick them up again is rare. Willy himself goes pretty well, the two Abobos who are with him often like to start throwing me around by held off this time.

And so Marian was saved, and Willy lay still from exhaustion. The Double Dragons took a nice car ride and the post-apocolyptic future continued. Or whatever the silly plot of this game is.