Released in April 2001, Dr. Mario 64 is a remake of the classic NES game, adding several different modes of play. The flu season has struck, and it's up to Dr. Mario to use his Megavitamins to eradicate every last virus. However, he runs into trouble when Wario tries to steal the Megavitamins to gain popularity. Meanwhile, Rudy wants the Megavitamins for his own mysterious reasons. 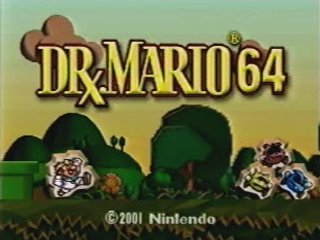 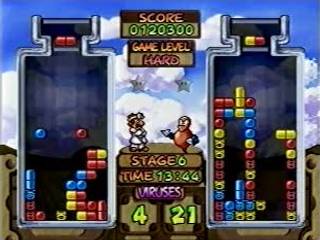 First and foremost, I'd like to give a special thanks to Essentia for doing the original run and the runs of story mode, for without her having done them I would have never thought to run this game, no matter how much I have always loved it. I also picked up a few things from her run that I don't believe I would have thought of alone, as purposely dropping double color pills on top of a pile of three seemed wasteful to me, not having thought of reducing drop time.

When I first saw this run, instantly I thought I would be able to beat it, since I knew I was good at the game. So I booted it up and gave it a try, coming up with a time over 47 minutes, more than 10 minutes longer than what this run was. However, I was determined and I knew I could do it, so with practice I got more precise and a lot more creative with my breaks, leading to faster times. I kept bringing it lower and lower and eventually came up with this run of 37 minutes and 2 seconds with 2 deaths. I'm not happy with having the deaths, but the rest of the run went very well for the most part with exception of a few mistakes that I will point out, so I am satisfied. If anyone ever beats this run however, I will definitely try to take it back.

Now, to the individual levels. I'll start with the Level number, then saying the level time/the total time. Then I will have some general comments and specifics (mainly mistakes) to look for.

The double yellow on the second pill was extremely convenient, and allowed for an extremely quick finish.

This is my fastest ever combined Level 0 and 1 time, so I'm very pleased with it. No mistakes here.

You'll notice I flounder the pills around a couple times, which will be seen some throughout the run as it's something I do while thinking, but no mistakes.

Nothing noteworthy except for my lack of yellow for the last virus. The last red/blue was supposed to go on top of the red sticking off the virus to save slight drop time, lost maybe a second there.

The double red drop at 2:38 was supposed to be flipped and moved over onto the red virus. While it still killed the red virus, it wasted a couple seconds from the extra drop time.

At 3:59, I accidentally flipped the red/yellow one too many times, but a quick fix. The two blue garbage clears near the end were unnecessary because I decided not to clear the yellow horizontally, but barely wasted any time.

Nothing really noteworthy, went to plan.

I was determined to get that yellow combo at the beginning. It created a slight garbage problem, but I think it was worth it. Near the end if I would have comboed the red garbage into the blue viruses horizontally I might have saved a couple seconds being able to horizontally break the yellow virus. Still went well though.

This level definitely should have been played smarter. While there were no execution errors, there were several bad decisions I made that could have made this level go faster.

The yellow/red at 9:56 should have been moved over but I messed it up. Other than that the level looked good.

A couple bad decisions with the yellows and blues in the lower left near the beginning (you should be able to tell where this is) but other than that good.

Gotta love those yellow cross combos, that's three so far in this run. Odd it always happens with yellow... the level went well. Seemed a little slow though.

Got a little built up on the sides at first, but it was fixed without problems.

Made some poor choices with where to place the blocks that didn't fit anywhere in the beginning. Watch for a nifty little double horizontal break around 20:40. You can see I make a slight pause while I thought of it. There's a red/blue I put almost to the bottom and flip it to make it do nothing, and I honestly can't remember what I was thinking when I did that. One of the worst levels of the run.

The first of two deaths. I accidentally flip the red/yellow when I don't want to. I manage to fix it but a few seconds later I do the exact same mistake and decide it will be faster to die than fix it. This costs 19 seconds. However the next run looks very good, a lot of clever horizontal clears. The double yellow at 25:15 is supposed to be flipped between the two yellows.

Bad decision to not move the second red/yellow over at the beginning. Forgot to flip the blue/yellow at 27:00. The double red at 27:41 was supposed to be slid through the gap but it didn't make it. Rest of the level was okay.

Bad pieces and decisions makes the beginning half of this level look pretty sloppy. However, the set-up from 30:35 to 30:48 leads to a nice looking combo. Level doesn't go as fast as I hoped.

Yellow/red in the beginning gets flipped one too many times. Level goes well otherwise.

The second death of the run. Again, yellow/red gets flipped one too many times and it's faster to kill myself off than fix it. Six seconds are lost. I almost place the double blue on top of the red/blue and die again but quickly notice what would happen and move it all the way to the right. Double blue at 36:19 was supposed to be moved over two spaces but only goes one.

And that's it! My original goal was to beat the current run by a minute and a half, and I have exceeded that. I think faster is possible, but a lot of luck would be needed and I'd have to have less mistakes, and this run already has less mistakes than I would normally make. Keep an eye out for my next run!

Story mode requires different techniques from classic mode. In story mode, the fastest way to do things is to get the computer player so piled up that they lose automatically before you clear all your viruses. Consequently, my strategy was to perform as many combos as possible in the hopes that it would cause the computer to lose. This didn't happen as often as I would have liked, but it was often enough that it saved some time.

Story mode runs are probably more entertaining to watch than classic mode runs, because they're a lot more unpredictable.

Like my normal difficulty run, my highest priority was getting combos in order to make the computer player pile up and lose. It seems that it's more likely for this to happen on hard difficulty since the viruses are higher to begin with. However, the computer players are smarter (a bit), and so it didn't happen as often as I would have liked. On the other hand...well, watch the battle against Vampire Wario, and you'll see.

I hope you enjoy watching this!