Released in November 2009, Dragon Age: Origins is a fantasy role-playing game developed by BioWare. Described by the creators as a spiritual successor to the Baldur's Gate series, it tries to be darker, grittier and more mature than earlier RPG's from the same company. The game was very well received upon release. 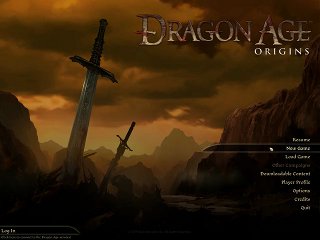 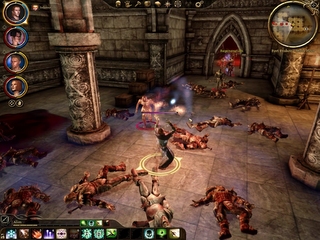 Thanks to:
Candace "Another speedrun?"
IcedCube
logitechSDAZ
Beenman500
Axel Ryman
orunin
error1
Imrik
All the others on the SDA forums who supported this run
The SDA staff, who make these things possible.
Bioware, for making this and other great games.

This run was done in version 1.00, some of the glitches will not work in later versions.

Character Creation
I chose the Mage character because Mages have the best killing power, especially with the leveling and attribute glitches.
Elves get an extra point of magic compared to humans, and each point of magic adds a point of spellpower.
I went into the fire tree so I can get fireball early in the game.

The Fade
The Fade is pretty simple. I tried to always keep moving except to cast. Both of the friendly spirits are talked to rather than fought, as fighting takes more time.
I accidentally misclicked once when aiming a Flame Blast, which may have cost me a second or so.
Also, the Rage Demon could be killed quicker. Mouse's Slam attack actually missed and caused no damage. The Demon should have died about a second and a half sooner than it did. Dialog went really well though, and I was unable to get a quicker time even with the mistakes.

The Mage Tower
This segment is pretty self-explanatory. The only things I could do to speed it up is to never stop moving and cut corners whenever possible.
I agreed to help Lily and Jowan, ratted them out to the First Enchanter, and got him to sign the Rod of Fire form. Then I headed to the basement.

The Basement
The Mage Tower Basement is where things start to get interesting. IcedCube figured out that you could hop through the locked door by running far enough away from a friendly character then turning off hold position. This segment could potentially be improved by killing enemies faster, but I'm not sure how to do it at this point.

Ostagar
Ostagar is where the infinite EXP glitch is performed. I need to get the vials of blood and return to camp. If you return with the blood before you get the scrolls, you can get infinite EXP by repeatedly turning in the quest. Thanks to Axel Ryman for pointing this out.
I quickly got the three vials of blood I needed and dropped combat. This could have gone a little better if I had only looted the darkspawn with vials of blood, but it's random and this was the fastest time I could get.

In camp I abused the EXP glitch and turned in the quest a little over 100 times. I accidentally turned the quest in one extra time, but this was a quick attempt otherwise and my arm was sore from spamming 1 and Escape.

Once I was level 16, I did the attribute glitch to get about 400 magic, 100 willpower, some cunning for coercion, and some extra consitution for hit points. The attribute glitch happens when you add points to a stat then hit reset. You will be able to subtract the number of points you added and apply them elsewhere. This can be repeated indefinitely. Thanks to Beenman500 for finding this. Thanks to orunin for finding that you can hold down the mouse button and hit shift, control, and alt to add points quickly.

I entered the Wilds again to get the treaties since you need them to progress in the game.
After turning in the treaties, I became a Grey Warden and headed to the Tower of Ishal.

Since each spell cast costs time, I tried to get through the darkspawn and out of combat with the fewest spellcasts possible. I can't see much room for improvement on these fighting segments. Maybe having higher magic or different spells would help, but I think it's pretty optimized as is.

Lothering
Morrigan does most the traveling for the rest of the game. Swarm travels VERY fast, and it's speed boost stacks with haste.

I recruited Leliana because she is important to do the out of bounds glitch later in the game. After leaving the Inn, Morrigan carefully evades some enemies and we leave Lothering for Denerim.

There will always be a waylay event when traveling to Denerim from here. The event can be a few differnt things, but being stopped by the Dwarven Merchant is by far the fastest.

Denerim
Here I made a small mistake by not having Morrigan hasted, but the time actually saved is minimal.

I had Morrigan face a particular direction near the gate to Arl Eamon's estate. Then, I ordered the party to stop holding position and Leliana appeared on the other side of the gate. Upon entering the estate, the game assumes that you've done everything up to, and including, saving Arl Eamon with the Ashes of Andraste. This is by far the biggest time saver of the game. Credit goes to logitechSDAZ for finding this trick.

Now that the game is almost complete, there are only a few things left to do.

Arl Howe's Estate
Arl Howe must die and Queen Anora must be saved. Here is the first use of the OOB (out of bounds) glitch discovered by logitechSDAZ. I paused the game and had two characters talk to Leliana. In the first conversation, I ask Leliana to leave the party. She does, but then the second conversation initiates. For some reason, this conversation takes place out of bounds and it is as if you were meeting Leliana for the first time. So she rejoins the party and I get to run freely OOB.

Once inside the estate, I used the OOB trick again to get to Howe quicker. Once downstairs I quickly killed Howe, got his key, and freed Anora. She walks through a closed door because I didn't talk to her before getting the key, and the game will only unlock the door the second time I talk to her.

Normally, this is where the player would either surrender or get killed and end up in jail at Fort Drakon. Ser Cauthrien, though very tough, is killable. By killing her I skipped having to go to prison at all.

Elven Alienage
After reporting Howe's death to Arl Eamon, the Alienage becomes unlocked. The party goes there and we OOB again to get into the warehouse. Here, thanks to Coercion, I was able to convince the slavers to give me evidence against Loghain without a fight.

The Landsmeet
After the evidence is collected, the party can go to the Landsmeet. Since I never talked to Anora and assured her that she would become queen, she convinces the nobles to rally against me. Loghain becomes hostile and I had to bring him to one hitpoint. Then, the Matron Mother stopped the fighting. Finally, I faced off against Loghain and killed him.

Redcliffe Castle
With the Landsmeet finished, I am now ready to go fight the darkspawn at Redcliffe. I ignored the village and went straight to the castle. After the fighting is done, I agreed to sleep with Morrigan before heading to Denerim to kill the Archdemon.

Denerim
This fight is very tricky. I put in well over a hundred attempts to try to optimize this. From what I can tell, waves of weak darkspawn come from three areas. When one wave dies, another spawns. The NPCs help take care of many darkspawn, and in a few minutes the party is assembled and ready to go.

Fort Drakon
This is a tricky fight, similar to the one at the Denerim Gates. Sometimes more Alphas and Emissarys attack, sometimes they dont. Sometimes a second Dragon Thrall lands, and sometimes it doesn't. After many attempts, this is the quickest time I got.

I'm not real happy with the first floor of the keep. Trying to go OOB just puts you in the first room, and then my party gets into combat with darkspawn I can otherwise skip. Morrigan can swarm past most enemies, but she's not really strong enough to kill the few that follow her. I finally decided to have the main character run past most enemies and kill the ones who follow.

The second floor is much more perfect since the OOB trick works beautifully here.

Archdemon
The Archdemon was one of the easiest fights I had. Vulnerability Hex brings all his resistances into the negatives (the resistance reduction is based on your spellpower). After that I load him with some damage over time spells and he dies real quick. One thing that didn't go perfectly was that the fireball didn't actually hit the Archdemon, but he dies so quick I'm not sure it would matter.

And that's the end of the speedrun. One day this will be obsoleted, either with new tricks/glitches or better optimization of the route.

Thanks for watching and I hope you enjoyed it!

Comments and questions to Peonuprising at gmail dot com.