The original arcade release of Dragon's Lair in 1983 achieved widespread acclaim, containing 22 minutes of full-screen animation from famous Disney animator Don Bluth. The most significant laserdisc game ever created, it grossed 32 million dollars in its first eight months and spawned countless merchandise and a TV show. Released in December 1990, the NES version of Dragon's Lair shares only one similarity with the arcade version: there are a thousand ways to die. In fact, these days, the NES version is maybe the most well-known, as an example of one of the most "unfairly" difficult and punishing games of all time. 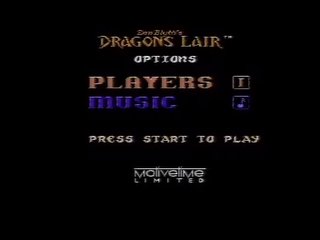 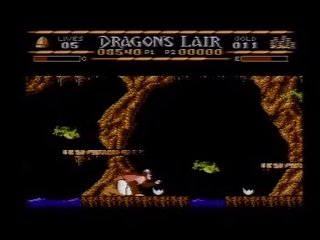 This is my first submission to SDA. I never expected to beat the former record by such a gap ! Initially my plan was to reach around 0:06:15 - 0:06:20, but by dint of practice, I realized under 0:06:00 could be possible. I'm extremely happy with this run ; of course it's improvable (by finding new strats, or with more luck against the 2 last bosses or with Lizard King), but I'd be surprised if someone reaches under 0:05:30 someday... I'd like to thank Claire who gave me the idea to do this speedrun, and guys like Kirkq, Wizphix and M_88 who helped me a lot with their videos !

[The Drawbridge]
You need 10 daggers to kill the dragon. My strat is 7 then 3. I use the 2 daggers when I kneel down on purpose ; I noticed that if you stand up too fast after the dragon shoots his fireball, the dragon has time enough to launch a second fireball before dying, and you'll lose time to kneel down another time. These 2 daggers are just here to give me a timing to stand up at the right moment. Thanks to that, I can kill the dragon before he launches another fireball, and I can directly walk to the door.

[The Entrance Hall]
You can think I lose time by keeping my Gold Bonus (as Lizard King didn't appear). That's right, it means I don't skip the Gold Bonus screen. But it helps me to go a little faster in next level, you'll understand why.

[The Gold Mines]
In this level, I usually take 8 Gold Bonus with my strat. As I kept the first one taken in previous level, the trick is to take one more Gold Bonus (the one over the second moving platform) to have precisely 10 Gold Bonus at the end of the level. Thanks to that, the Gold Bonus screen will be passed faster than with 8 Gold Bonus. The way I pass the last moving platform is very tricky, but with practice, I can reach a solid successrate here. Surprisingly a Gold Bonus is added to my total, even if I don't jump directly on it (and you can notice it doesn't disappear) ! I don't know if it's a bug or something else, but you can try, it works every time ! I couldn't beat the trolls faster than that : it's hard to kill the one to the left at his first appearance, but I managed to do it here. Otherwise you lose around 2 seconds to wait his second appearance and kill him.

[The Hall Of The Grim Reaper]
The first hidden energy isn't really necessary, but as I don't lose time by taking it, it's safer. The Reaper can be beaten faster with more luck (for example if he shoots only low fireballs). A more aggressive strategy is also possible, but I think it requires some luck too.

[Singe's Cavern]
Until the very last moment, I planned to jump over the third baby dragon, but it's very tricky. And even if it's faster, I realized I lost this benefit because of the second flying dragon (who drops something like a rock), as I have to wait him just after I killed the sixth baby dragon, to move safely to the next island. So I switched to a safer strat. Against Singe, I counted the number of hits, so I knew what I was doing at the end, don't worry. ;-)

For information about speedrunning Dragon's Lair and to get a better understanding of what's going on in this run, go to the guide in the SDA knowledge base (referred to as sdakb in my comments below):
https://kb.speeddemosarchive.com/Dragon%27s_Lair_(NES)

Background
I've been wanting to see a speedrun of this version of the game for a long time. This version has a terrible reputation, which is well deserved. The game runs at 12 fps and feels very, very clunky. The levels are pretty relentless in a casual first-time playthrough, but aren't particularly hard once the level layouts have been memorized. The last fight, against Singe, is however both challenging and super RNG-dependent. Anyway, a simple to execute game like this that was basically just a bit of grinding for good RNG was what I was looking for as a distraction during my Adventure Island attempts.

Run comments
I'll comment here on noteworthy events of this particular attempt. For more detailed level comments, refer to the guide in the sdakb linked above.

Level 1
I got a "neutral" Lizard King appearance. The LK saves 2.5 seconds by avoiding the gold countdown at the end of the level, so I always reset if I didn't get any encounter in this level. There is a potential additional time gain of a little over a second by the LK despawning one of the enemies, but that's relatively uncommon and not something I required for continuing.

Level 2
It's possible to get a LK encounter in the dark section. I estimate that the chances are in the range 10-15% and was not something I reset over. Besides, when the LK appears, it messes up the boss fight and requires a different (and slightly slower) approach, which I for some reason have a bad success rate with. 2.5 more seconds could be gained though.

Level 3
* Since all the platforms in this level are on a global timer, the level is basically on a fixed timer until the pit with the two moving platforms.

* My health was good, so I could avoid the second E (and the accompanying G). That's pretty standard though.

* Sadly, I made a huge mistake at the boss. I released the jump button too early when trying to buffer the second jump. This cost me 1.5 seconds. There is also the possibility of an additional 2 seconds gained by crazy luck against the Reaper. See the sdakb for details.

* It's possible to squeeze out a few more frames here and there by being more aggressive against the baby dragons. They often manage to throw a fire ball right before dying though, which is the reason for the momentarily hesitations in a few places.

* The Singe fight was sick. Absolutely sick... This was the second best fight for me. Ever... And that includes save state practicing... To get a fight like this in a somewhat decent attempt trumps all the other luck factors and execution mistakes since so much time goes into this fight.

* Jumping forward on the last attack jump is risky. It can sometimes be tricky to know exactly how much health Singe has left, especially if any baby dragons have blocked some of your shots. The jump also needs to be correctly timed with regards to the baby dragons. If one appears during the jump, there is no way to take it out. Usually, I only attempt this jump if I know there is only one jump attack left and that the previous baby dragon has been taken out just before. Of course, that requires that Singe decides to blow a low puff at the right time... So that's a pretty fortunate time saver that I got to include on top of an already very good fight.

* Very often, Singe manages to blow a final smoke puff before succombing. If you don't dodge it, you'll get hit and the fight is over. One more movement frame (= 5 actual frames) and Singe would have had the time to blow a last puff at the end. That was too close of a call to make there and then and decided to dodge a possible smoke puff, which cost me one second.

Final thoughts
While none of the possible RNG events before Singe was favorable and there was even an ugly execution mistake, the exceptional Singe fight makes up for it all.
This time is obviously possible to beat though. My sum of best is 9 seconds faster. And the SoB could still go down by at least around 5 seconds in levels 3 and 4 with the best possible RNG. The chances of getting those rare events to line up together with a good Singe fight would require a lot of dedication though.

Special thanks
There wasn't really any resources for the US-version when I began speedrunning this game. The JP- and PAL-versions are so different, that many areas have to be approached differently. I still managed to pick a few ideas from KartSeven's run and the TASes by meshuggah and by Kirkq though.