Released on August 18th, 1999, Drakan: Order of the Flame was developed by Surreal software and published by Psygnosis. The game follows Rynn, a young woman with extraordinary martial skills, and an ancient dragon Arokh on their quest to free Rynn's younger brother from the evil sorcerer Navaros. The gameplay alternates between dungeon exploration and monster fighting when Rynn is alone and aerial dogfights when she mounts Arokh. 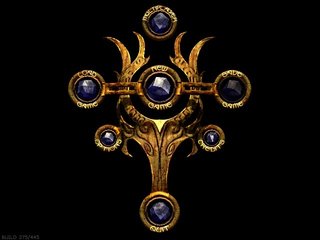 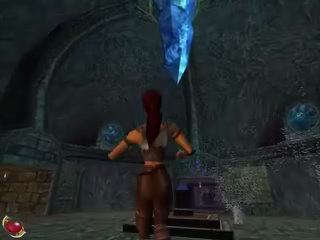 Medium difficulty: 0:57:07 by David Joassard, done in 21 segments appended to one file.

First I'd like to clarify one important point : due to its old age (9 years) the game suffered of multiples crashing problems on both PC i played it. Those crashes freeze the game and make me return on the desktop, this happen at very specific places in the game that's why some of my quicksaves are very close each other. Here are the places where the game crashes:

Since i launch the game in developper mode, the diffculty level is automatically set to medium.
About half of the cinematics are skippable.

Run comments on each level :

Large-skip glitches: 0:13:06 by Patrik Varjotie, done in 27 segments appended to one file.

Tricks, glitches, etc.:
* Fast jump: You gain some speed for a short period after you land a jump. If you jump during that period, your jump will be faster than normal jump.
* Item duping: You can dupe items that are two spaces wide by moving them to the right edge of your inventory, half inside and half outside. After that you should have another item in your cursor. If you drop a duped item on certain locations (Succubus Lair for example) and you save & load, the dropped item will be "corrupted", meaning you can't interact with it.
* Item boosting: Trying to pick up item while you're jumping straight up or forward launches you backwards. You'll get different speed depending on how far away you are from the item. Angle and your height from ground also have minor effect on the speed. If you hit a wall, slope or corner you'll either stop, die, or get launched to a different direction.
* Blocking: Blocking moves your character a bit backwards. You can get through almost any wall, etc. by spamming block.

* Ruined Village: Taking a minor detour to pick up Rusty Chainmail, duping it couple of times. Item boost over the river to Wartok Canyons load trigger.

* Wartok Canyons : Arokh doesn't spawn at the start as we've skipped Arokh's load trigger. Couple item boosts to get further into the Canyons. Going through the cave triggers Arokh, but doesn't load the model (only model load triggers are at Ruined Village and Volcano AFAIK). Because of this, we get to play half of the game without model!
& Grotto : After getting Arokh, there's only a bit of flying in and out of bounds and a bit of clipping through gates and walls.

* Island/Bell Tower: Flying straight to the Bell Tower, clipping through a wall and using block to get to the portal.

* Fortress: Going from portal to portal in almost straight line with item boosts.

* Island (night): The "Super item boost" right at the start. Getting fast enough boost and hitting a specific point in the wall launches you upwards, increases your speed and flips the character upside down. With this we can skip almost all of the level. You could boost straight to the end of the level, but for some reason doing this boost disables your inventory, removes all of your weapons,
removes your ability to interract with most objects and forces free-look camera. All of these things get "fixed" when you go and take a quick swim.

* Succubus Lair: Couple item boosts yet again before the next big skip. About at the middle point of this level, if you boost to a specific point in the wall, you'll clip out of bounds. If you hit edge of the map, the game tries to move you back inbounds, or more like moves you back and forth, keeping your momentum/speed. Turning yourself usually launches you backwards at some point.
Depending on the height and speed of your boost, you'll get launched somewhere back inbounds. Optimal place of course is in the water at the end of the level.

* Volcano: Got the best boss RNG (as expected in segmented run). Hitting a target with projectile attack at the edge of their hitbox can cause multiple hits (usually 5-15 hits), meaning you can one or two shot everything in the game. Couple item boosts and clips again, nothing too interesting. Getting through the ice with blocking to get Runeblade.

* Rift World: Clipping through the door with Arokh to instagib the boss.

Moves used in the run:
* Fast jump: You gain some speed for a short period after you land a jump. If you jump during that period, your jump will be faster than normal jump.
* Skullsplitter: Special move that does incresed damage, but more importantly reduces fall damage. Done by pressing jump -> crouch -> attack while in air.
* Fast fly: You fly slightly faster with Arokh if you hold jump + forward + left/right while flying.
* Sword block flying: As you land a jump, press jump + left/right + forward + block. This causes you to fly as long as you keep holding block. Big thanks to Klaerya Delandos for finding this glitch.

* Wartok Canyons & Grimstone Mines: Clipping through the gates with Arokh and flying out of bounds to skip a large portion of the level.

* Grotto: Just flying through, skipping all three force field gates. Getting through the first gate was pretty ugly, but didn't lose much time.

* Fortress: Getting through all kinds of corners to get out of bounds so I can skip all of the challenges in the fortress. Took an unnecessary hit at beginning of the level, but other than that everything went pretty much perfectly.

* Island (night): Using the sword block flying glitch again to save a bit of time. This was probably most frustrating level overall, because atleast with the flying glitch, as there seems to be around 50% chance of the game crashing here.

* Succubus Lair: I was a bit slow with killing the two succubuses. Getting through the doors in this level is pretty hard. If the game would decide to be nice, this level could be done a bit faster.

* Volcano: Killed both King Scavenger and Queen Shilla in 4 hits (takes randomly between 3-8 hits each). Shilla flew really far during the fight, wasting a bit of time. Going out of bounds after freeing Arokh to skip ~50second unskippable cutscene that runs after you pick the Lava upgrade for Arokh. Getting through the force field gate took a bit longer than it should've. I land through the lava with Arokh and get the Rune Blade without ever getting Lava Rune to save ~2 minutes.

* Rift World: Clipping through the door with Arokh to get him to the first part of the last fight. This makes the last fight pretty trivial. Cutscenes at the end get messed up because of this though :(