This follow-up to 1989's Duck Tales was released by Capcom in 1993. Scrooge McDuck sets out once again to find treasure and bounce around on his cane a lot, all for the sake of Mercantilism. 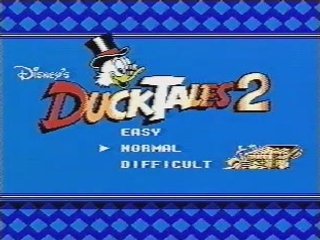 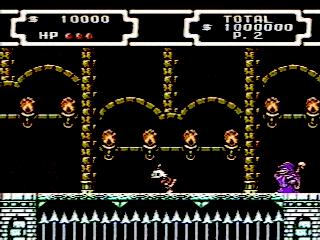 Dennis Möller died of cancer at only 17 years old. He was always one of my best friends from when we were six years old until the day he died. I didn't knew what to do when he left us. I have a very good memory about when we played this game as kids so I decided to do a run for him. He didn't care about my speedruns very much and I know its just a poor easy run but thats something. Another friend played this game for a while and he decided to do a run of it. After have been waiting over one year I decided to do it myself. I was very sad and angry this days and played it in two days straight.

I really love the game, I love the music, the game is very easy, very easy and fun to run, with one damn exception. The "stone golem", the boss in Mu-island. That is the reason why I choose that stage first. And that's the reason why it took me two days to do the run, also the reason why the run isn't perfect.

In my 1-200 attempts or more on the mu-island boss I finally made it to kill him pretty quickly. He's so random that the hands in mario 3 is nothing compared to this boss. I could write long comments about how to get the perfect mu-island boss fight but I'm too lazy. I'm still 10-20 seconds from a perfect boss fight. And the chance to get as great a fight as the TAS (in theory possible) is 1 in 1000. The perfect stone golem fight includes two very tight double pogo hits. To do that he needs to throw down two stones just beside him in a row.

I have done close to perfect runs through this game but none includes a good boss fight in mu-island. When I finally got the chance to kill him quickly I was too nervous to get a very good time. Still I did a lot of tight moves. I'm very satisfied with the time I got. But still it can be improved with 20-30 seconds at least. But I'm pretty sure of that no one will ever beat this speedrun with a PAL cartridge. And if so I will spend my life trying to beat it ;)

There is a chance that I will do a hard mode run on the NTSC version some day. But for now I don't have the cartridge.

The old greedy bastard Scrooge McDuck still wasn't happy enough when he got his green cheese from the moon of an infected rat with bug issues (and other treasures). So he decided to go around the world once more to get him some money.

Scrooge McDuck first decided to go to the Niagara (Falls). On his way to the Lava boss, who was hiding in a watery envirement, he finds himself on floatable boats so he can cross the water. After all, ducks can't swim now can they?

Meeting up on Gyro Gearloose and getting the hidden treasure map he then decides to pogo the lavaboss and steal his secret flower.

After getting the first treasure Scrooge wants more and on his way to Egypt he finds a half sunken ship in the Bermuda Triangle and decides to give it a peek. He then discovers, after killing pirates, crabs and vultures, another piece of the map and even meets Gyro Gearloose and recieves a tool to help him break more stuff. How Gyro Gearloose got there, no one knows.

Finally Scrooge McDuck finds himself facing the Pirate Captain and cleaverly uses his cain to hang on the wall and kill him. He then proceeds to steal the Golden Drop of Water thingy.

Moving on and finally reaching Egypt he swoops away those pesky little flies and musquitos. When he reaches the room where the hidden map piece is he uses his paranormal powers to decifer the code and gets the map piece. When walking back he finds Dewey who gives him a cripted messages used to decifer the code that he already deficered. Thanks a lot! Going further into the pyramide Scrooges finds that destroying blocks with sunlight isn't all that difficult and even gets a hidden treasure in the process.

Having toyed enough in the pyramide he decides to kill that stupid old Pharaoh dude and take his sword as a bonus.

Feeling a bit down from all that killing Scrooge buys himself two happy pills from Huey, which enables him to endure more then he was able to. What the exact contents of the pills were, only Huey knows.

Engulfed in the happiness that he was, he stranded on the Mu Island for some obscure reason and just goes on exploring the area for fun. To his suprise he even finds Gyro Gearloose again. That man is everywere! Gyro gives him more tools. Scrooge, still entoxicated from the pills, moves on and in a vague moment of happyness walks right into several mermaidfish creatures not realising he now has a sore thump.

After talking to Launchpad and respectfully declining his offer to take him back he finds himself in a room where he can participate in a great game called, put stuff in holes. He always loved this game when he was a little kid. Upon putting stuff in holes everything begins to shake and it seems as if the the ground is actually rising. Further ignoring this moment and moving back to Launchpad he gets mad at him for asking the same question again and just ignores him.

When Scrooge finds another hidden treasure the happy pills begin to were off and he gets so pissed because of his sore thump that he just wacks away with his cain blindly. Thanks to Gyro and his usefull tools he actually stumbles upon another map piece and realises he had a quest to fulfill. Desperately trying to find an exit he stumbles on some Rockman and uses his forte in running away (with money) to get out of there with a Golden Plate.

Tired and hungry of all this traveling he is going back to his homeland were, before reaching his house, he finds a very weird and haunted looking castle. There must be treasure there he thought, so he enters the place. After some jumping around he finds another map piece only needing one more map piece before he can sew it all together. He then finds some wretched old creature, wacks it on the head and takes the Golden Bubble that was left in the treasure chest.

Being as hungry as he was he decided to eat a piece of the green cheese he found in his earlier adventures. This action, he later regrets. Because of this he landed in a very, very bad trip. And meets Flintheart Glomgold who told him he kidnapped Webby and that he needs to meet him in the half sunken ship that now is repaired in the Bermuda Triangle. Being on the bad trip that Scrooge McDuck was he was as confused as can be and talked to Huey. Who convinced him that buying the missing mappiece, that Huey had all along, for the same amount of money that the actual treasure is worth was a good idea. I guess those nephews really are relitives of Scrooge.

Still being in the bad trip he sewed together the map pieces and took off. It appears that the secret treasure was actually in the castle's basement. If this was really true or he just imagined it all and somehow ended up with the secret treasure, no one knows. Luckily for Huey, Scrooge forgot how he obtained the final map piece and after recovery goes in to save Webby.

Knowing that dumping radioactive stuff in the sea is not allowed and comes with an enormous fine he thinks of an excuse so that no one will ever have to find out. However, Launchpad, still feeling sorry for his earlier actions decided to dig up the treasures, not knowing it actually was waste. Again Scrooge can't show that he knew it was actually waste and tries to deflect their attentions by showing off the secret treasure he found.