Released in June 2011, Duke Nukem Forever is a strong contender for the most disappointing game of all time, narrowly losing to that time your high-school crush invited you over for "a few rounds of Scrabble", only to bring out an actual playing board. The player controls Duke Nukem - the legend himself - while he battles aliens and occasionally slaps round shaped silicon based - you know what, I'm not even gonna finish this sentence. 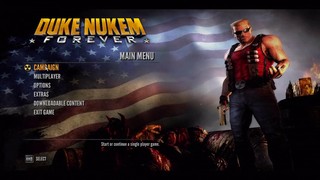 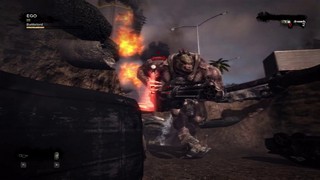 The Big Skips
Here are some brief descriptions of the five major skips to look for. I've listed them chronologically by chapter.

The Duke Dome
Skip a battle by dropping a red gas tank in front of a locked gate. Use the dropped tank to hop over the gate. This saves about three minutes.

Crash Course
Skip the turret section in Crash Course by falling onto an invisible ledge and crawling under an I-beam. Trigger the next checkpoint and reload the checkpoint to continue. This saves about two minutes.

Ghost Town
Stack six barrels near the barn to collect the gas can faster. Reload the next checkpoint to escape the barn. Collecting the gas can this way saves about three minutes. Use a HoloDuke to distract enemies and stack three barrels by the saloon to escape town without refueling the truck.

Highway Battle
Refuel the truck with the gas taken from Ghost Town. This saves about six minutes.

The Clarifier
Stack two barrels on a precarious ledge to skip several battles in the Clarifier. This saves about two minutes.

My Mistakes
Here are the notable mistakes I made.

The Duke Dome
After I solved the physics puzzle, I tried to use a new trick to launch myself forward with an invisible wall. Unfortunately, the grenade I threw rolled too far away from the barrel and the trick didn't work.

Crash Course
When I tried to skip the turret section, I failed to land on the invisible ledge on my first attempt. I wasted about fifteen seconds here.

Highway Battle
I hit a barrier and wedged the truck into an unusual position after the last jump in Highway Battle. I wasted about fifteen seconds getting the truck unstuck.

The Shrunk Machine
One of the pig cops eluded me during the first battle, so I had to waste a few seconds to find him.

The Generator
After adjusting the pipes, I attempted to jump onto a small ledge and failed twice. I decided not to attempt the jump a third time. I wasted about thirty seconds in total.

The Clarifier
Getting the blue barrels to the top of the scaffolding is the slowest part of The Clarifier skip. I tried to throw the barrels straight to the top, but both barrels failed to stick on top.

Blowin' the Dam
Some falling debris pushed me off a ledge before I could clear it. It took me about twenty five seconds to get back to the ledge.